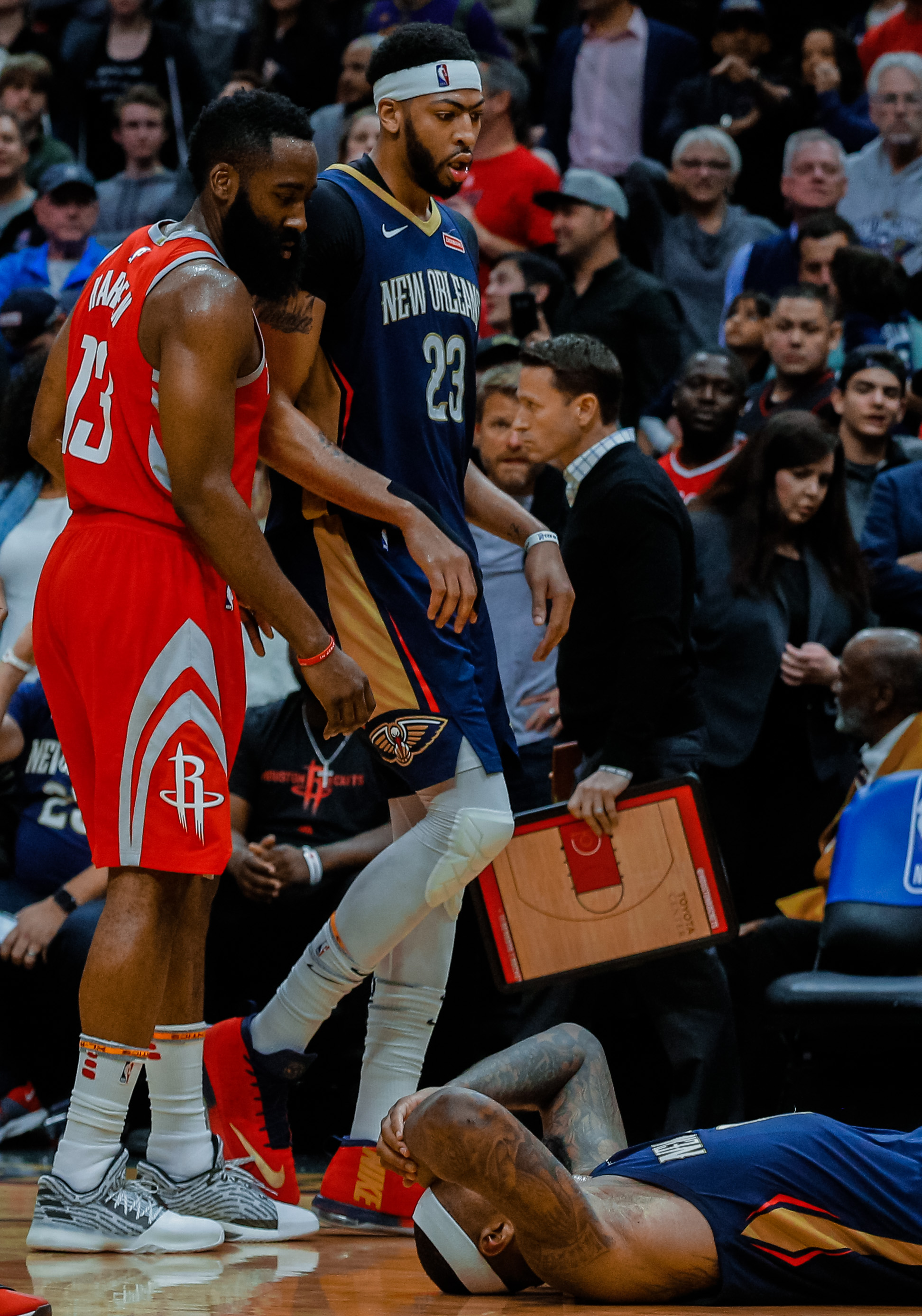 New Orleans,LA- The New Orleans Pelicans hosted a high powered, second best team in the west Houston Rockets Friday night in the Smoothie King Center. The Pelicans played to a sell-out crowd to watch whats was sure to be a blockbuster Friday night match-up. I’m here to tell you the fans really got their monies worth! This game had everything from former New Orleans Players like Chris Paul, Trevor Ariza, Eric Gordon & others with malice on the mind to stick to their former team. The two clubs were both sporting winning streaks coming in & both won 7 of their last 10 contests.

The game was eventful as the Pelicans showed early showing they were capable scoring with Houston as they produced 66 first half points to cruise into halftime feeling good. The good feeling continued in the second half as the Pells cognizant of their third quarter implosions stead steady against a dangerous Rocket team. This game was closely officiated & a bit chippy at times as both teams earned 56 free throw attempts combined. The Rockets took control in the fourth & tried to win the game at the line as Darius Miller committed the cardinal sin of fouling the three point shooter, which James Harden missed the second attempt.

The Pelicans received the ball after Rockets off guard attempted to bounce the ball off the rim to himself.  Both New Orleans & Houston were able to make plays late but thanks to Pelicans reserve forward Darius Miller hitting some key shots that helped lift New Orleans to a quality win 115-113.

The Pelicans shot 54% from the field & 41% from beyond the three point line, both better than Houston. The Pelicans also out rebounded, out assisted & dominated Houston with the points in the paint. The Pells were led by the excellent play of Anthony Davis, who led the team with 27 pts 11 rebs 5 blks & 5 asst. The Pells top guard Jrue holiday continued his stellar play tossing in 21 pts 7 asst while playing superb d on Chris Paul & James Harden.

The Pelicans didn’t get out of the win unscathed as big man & all-star center DeMarcus Cousins left the game late with an Achilles injury. Cousins was hustling to tap the ball in bounce after missing a free throw, then landing awkwardly, grabbing his lower leg hitting the ground. It was later reported by ESPN that DeMarcus Cousins injury was severe & he will miss the rest of the season.

The Houston Rockets top scorer was guard Chris Paul with 38 pts & 8 asst. The Pelicans bench even helped out again tonight as Coach Gentry played 5 reserves tonight finishing with 39 points combined. The Pells now have won an impressive 4 in a row & 7 of the last 8 games. New Orleans (27-21) next match is Sunday night against the Los Angeles Clippers (24-24) in The Smoothie King Center. The Pelicans are now third in the Southwest Division & Sixth in the Western Conference race.

The question is what happens now that Boogie Cousins is removed from the equation? Do GM Dell Demps make a trade in the meantime to help the team remain competitive? Its certainly a major blow to a team who seemed to finally had figured it out, now have a larger problem.