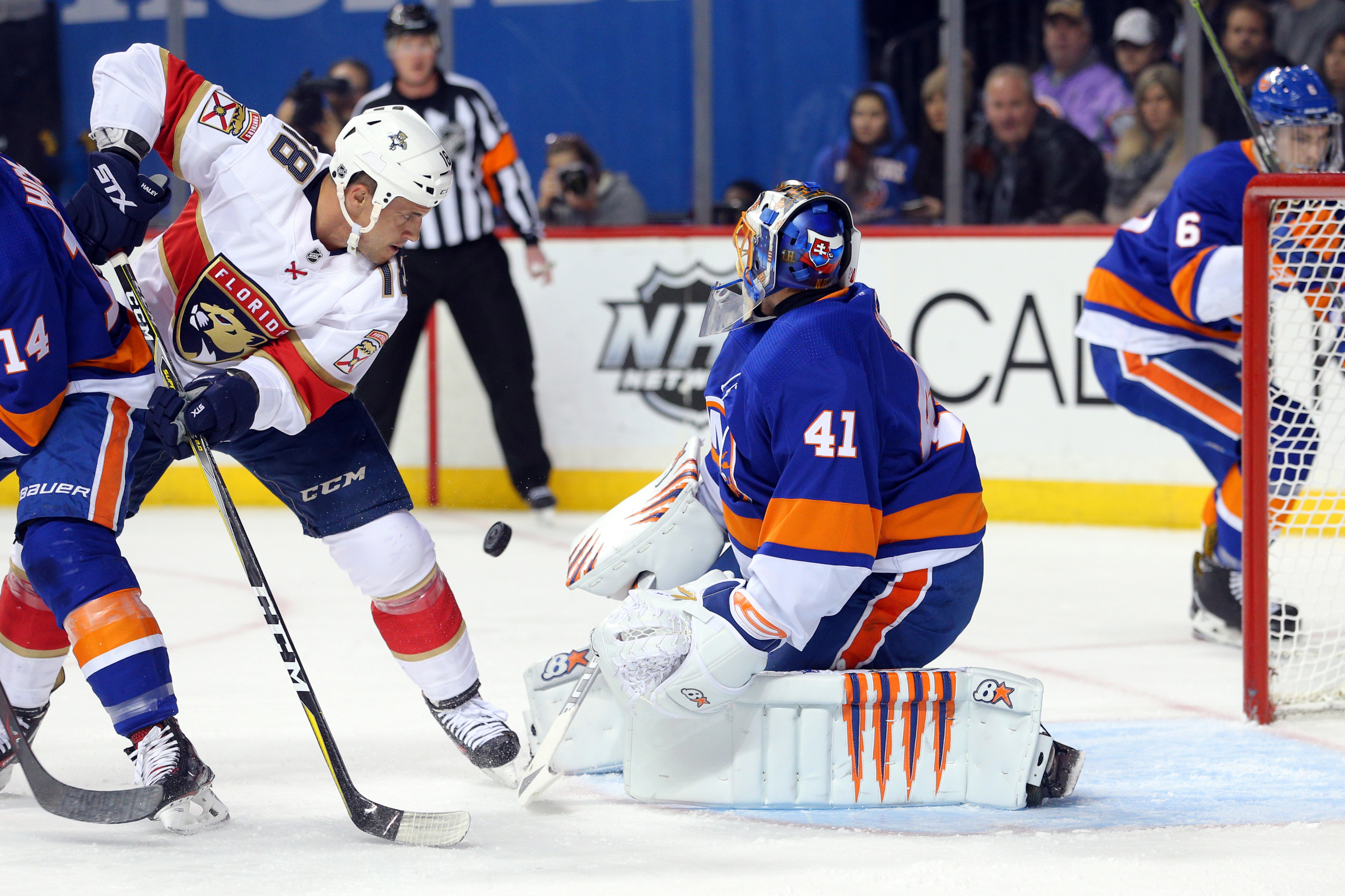 NEW YORK — You may have felt it as early as puck drop on Tuesday evening in Brooklyn that it would be one of those games. Not only did a weeknight contest draw only 10,000 plus in the crowd, a vanilla opponent who lost three straight leading into the All-Star Break did whatever they could do stymie the previously hot New York Islanders offense. It all resulted in a brutal 4-1 loss on Barclays Center ice.

No, this was not the heavily anticipated rematch of the 2016 First Round Series between the Florida Panthers and New York Islanders. It was anything but. However, the Panthers had no issues getting revenge, playing efficient hockey throughout Tuesday’s tilt.

They started the scoring 8:57 of the opening period when Mike Matheson scored his fifth of the year on a shot from the right point that went in and out so fast, the officials needed a review to check if it actually touched twine. It did.

Down 1-0, the Islanders lacked the energy they’ve shown when down before. In fact, it was Jaroslav Halak (36 saves) keeping the team afloat after one period and throughout the game.

In the middle frame, Evgenii Dadonov caught New York’s defense on its heels, as the forward scored a wraparound goal at 14:40 for his ninth point in as many games. Former Rangers defenseman Keith Yandle blasted one home in the third to put the Panthers up by three with just over 15 minutes remaining in the contest.

Needing a jolt of energy, Adam Pelech found the back of the net on a slick wrist shot from the slot in his 100th NHL game. The Islanders would get a power play with a chance to make it a one-goal game but they were unsuccessful and surrendered several shorthanded chances that Halak was forced to stand tall on.

Jonathon Huberdeau netted his 17th of the season after Halak vacated the crease for the extra attacker to seal New York’s fate.

1. The Islanders lacked punch. They didn’t truly gain any momentum or pressure until the home squad found themselves down by three in the final period. The effort, or lack thereof, was summed up perfectly by the head coach:

“The deficit is, we’re out of the playoffs right now. That should be kicked in at 7 o’clock, not 8:30,” Weight said. “I’ll probably yell and scream and tell them to be ready tomorrow. As a player, you have to know you have to be ready to start the game. It shouldn’t be with reckless abandon right now with 30 games left, 30-something games left (31). It should be no need to explain it, no need to beg for it. If you make mistakes, it should be hard mistakes. Puck-watching, turning pucks over, floating, circling for two periods … we haven’t done it in a couple of weeks, so I’ll take it myself. I don’t know. We’ve got to get ’em going by tomorrow night.”

2. The Islanders are out of the playoffs as of now but they are only one point out of the final Wild Card spot. The Philadelphia Flyers have two games in hand on New York despite them being up by the mere point. Also, the cross-town rival Rangers now have one game in hand on the blue and orange with the same number of points and one fewer loss. If only the Islanders could play the way they do against the Rangers every game.

3. Remember when the Islanders started off the season 12-3-2 on home ice? They’re now 13-8-3 as they’ve dropped eight of the last 14 games in Kings County. What’s behind it? Maybe moving to Belmont or returning to the Coliseum is a good thing after all.

4. Anybody else truly enjoying watching Adam Pelech on a consistent basis? He has come into his own this year and was rewarded for his hard work and effort this year with a goal in his 100th career NHL game. Kudos to him. He has stepped it up tremendously since Johnny Boychuk and Calvin de Haan went down with injuries. He cashed his 13th point this season on Tuesday evening but is also a plus 12 on the ice.

5. Jason Chimera finally touched the scoresheet for the Islanders against Florida. For the first time since January 13 against the Rangers, Chimera grabbed an assist. It’s only his second point in his last eight games and third point in his last 21 contests. The Islanders need him as well as the rest of their bottom-six group scoring again if they want to sneak back into the postseason. This means players like Cal Clutterbuck, Tanner Fritz, Alan Quine, Brock Nelson and Casey Cizikas need to start finding twine again.

6. Speaking of Cizikas, it was good to see him back on the ice after missing the last six games due to an injury. He skated for 12:56 and totaled 15 shifts while registering as a minus-1 on the evening. The Islanders are starting to get healthier. Signs point that Andrew Ladd is close to returning as Weight said after the loss he is hopeful he may be able to play at Toronto on Wednesday.

8. The good thing is that the Islanders are back in action to rid the bitter taste out of their mouths on Wednesday. The Toronto Maple Leafs are not a pushover team but expect a hungrier group of Islanders as they went 2-1 against the Leafs last year, scoring 12 goals in three games against them.

9. Don’t count the Islanders out. They’ll be playing on friendly confines for a while to right the ship. After Toronto, they play seven of their next nine games on Barclays Center Ice.

10. It was nice to see former Islanders head coach Jack Capuano in the building on Tuesday night as an assistant on the visitor’s bench. He received a nice ovation from fans that recognize the coach that took them to their first playoff series win in over 20 years. John Tonelli was also in attendance and took part in the ceremonial puck drop before the game.