RECAP 52: Don't Jump the Shark Before You Save the Murr 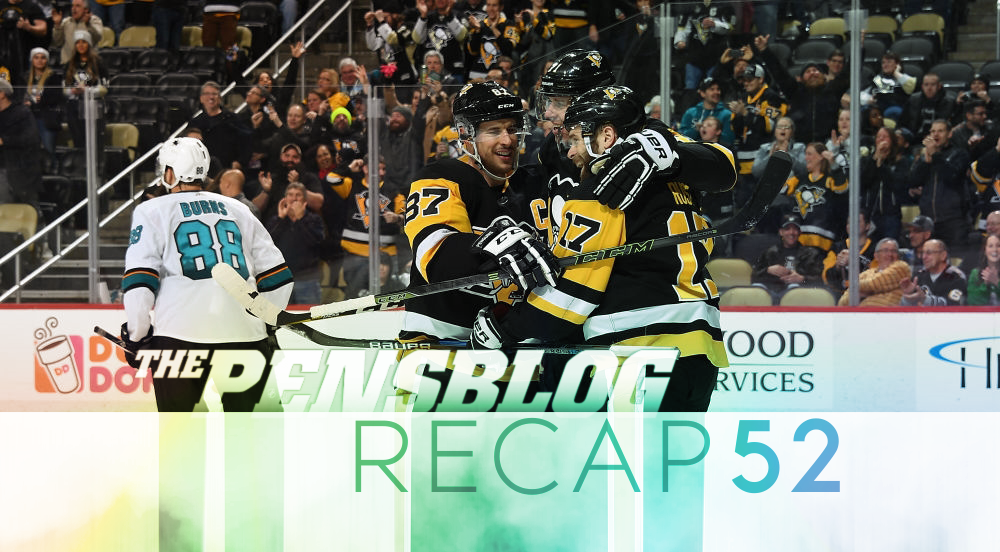 RECAP 52: Don't Jump the Shark Before You Save the Murr

A game in which the Penguins took being badly out-shot, somewhat outplayed, and nearly down a goal into the 3rd period and came away with a dominant final 20 minutes and a full 2 points?

Look, make no mistake about this:  The Pens sleepwalked through the first 3 months of the season.  They made the playoff race more difficult on themselves than it had to be.  But after a month of January where they won 9 of a possible 12 games, which also included the 3 game California road trip, no one would fault you if you said “the Penguins are back, baby.”

Because frankly, these sonsuvbitches are back, baby.

Death, taxes, and the Pens lighting mups at the turn of the New Year.  It’s as automatic as the Caps falling in the 2nd round.

Last night’s game against the Sharks was indicative of all of this.  Had this game taken place in November, the Pens are probably on the other side of this 5-2 result.  San Jose controlled long stretches of the opening 40 minutes of play, outshooting the Pens 36-21 over that stretch, with 11 of their 42 total shots coming on their 5 powerplay chances.  The difference?

And boy, was he ever brilliant in his first game back after the passing of his father.  Murr looked every bit of the goaltender that backstopped this team to two straight Stanley Cups.  The Sharks are known for getting traffic and tips in front of the opposing goalie, but Money was on top of tracking everything they threw at him.  His rebound control was back to what we’ve come to expect.  As was his rebound prevention.

Even if the underlying possession metrics paint a picture of this game being fairly even at even strength, 42 shots is still 42 shots and the kid certainly earned and deserved this one.  If this is any indication of what’s to come, the rest of the Eastern Conference should be pissing their pantsuits.

No changes to the lineup that topped Minnesota on the other side of the All Star break, save for Murr getting back into his crease for the first time since January 4th.

Midway through the period after a pretty even, slightly Sharks tilted opening, we got some early 4v4 action after a chickenshit slewfoot from the bad Karlsson on 87.  Sid retaliated, but still unsure how that was even close to being even steven.

Nevertheless, the Pens at 4v4 are deadly with all that open ice because they are both good and back.  For the second game in a row after drawing back into the lineup, Ian Cole made a great play to hold the fort at the offensive blueline that immediately led to a goal.  Rust ended up collecting the loose puck and circling back into the neutral zone to get a head of steam before combining on a give and go with Sheahan.  The latter regained the zone and with Dillon leaning towards Cole, Sheahan was able to isolate Braun, after Tierney was slow to track back, to find the streaking Rust coming in down the right wing to join back into the fray and pull it across Jones to the backhand and slip home the opener.

After both teams traded off powerplay chances on either side of the intermission, the 3rd PP of the game would go to the Shorks with Jultz going to the box for interference at the blue line on Sorensen as the Shark tried to enter the zone.

Even without Jumbo, it was your standard San Jose powerplay.  Everything went through Burns at the point, eventually ending with him throwing a wrister through 5 bodies in front of Murr to sneak it in stick side.  The Kuhn would blame himself for that goal for not blocking the shot in an interview with Potash.  Alert: He’d make up for it later.

Kuhnhackl wouldn’t make up for it on the next Sharks PP and in fact could take a little bit of the blame for not getting a clear if the Sharks go-ahead goal didn’t come right at the end of a 5v3.  With Phil in the box late in the period for high sticking and Letang joining him about 90 seconds later, San Jose had the Pengos on the back foot.  Following 58’s penalty, Pete DeBoer would ingeniously take a time out to rest his big boys on the first powerplay unit to have them firing for the abbreviated 5v3.

The breakthrough came just as Phil’s penalty expired but before he could get back into the play.  SJS isolated Sheahan this time with Pavelski lurking at the side of the net on his side of the ice.  The Good JoePa had his initial shot stopped by Murr, but just enough for Pavelski to complicitly chip the puck towards Hertl in front.  He got just enough of a piece of the grenade that it got away from Kuhnhackl twice as it made its way to Logan Couture’s blade for the finish.

Much like The Lord™, Chewbacca giveth and Chewbacca taketh away.

Up 2-1 and under 10 seconds remaining in the period, Burns looks like he was going to head behind his net to gather a dump in and just eat the rest of the period because that’s what Yetis do.  They eat.  Patric Hornqvist had other ideas, jumping in and putting him under duress.  Burns reversed the puck, expecting help from a either Dillon or Goodrow.  Instead, he got help from Phil!, throwing a buck nasty backhand feed to Gene all alone in front for the equalizer for 4.1 seconds left.

As far as odds go, the Sharks had a better chance at hitting the goddamn lottery than winning this game after Malkin’s late goal.  The Penguins were coming hard and fast. Just over 6 minutes into the period, the Shorks did it again.  This time, it was Jones giving the puck away behind the net under a shitload of pressure from Big Dick Pat.  Hornqvist would get an assist this time around, once more feeding 71 all alone in front.

Despite getting shelled in the SOG department through the opening 40 minutes, it was the Penguanos doing the shelling in the 3rd.  They edged the Sharks in SOG 10-6, had 18 of the 30 combined shot attempts at even strength, but more remarkably, had 13 of the 16 (!!!!!!) scoring chances at evens.  Simply put: that’s fucking insane.

What’s more is that we got yet another goal from the 4th line minus Reeve’s plus Rust, who, since returning from injury, has 2G-2A in his last 3 games.  Letang set the scene with a little help from 87, keeping the puck in at the point and immediately getting it to the net.  The Kuhn got enough of a piece of it to throw Jones off enough for him to kick the rebound into an area where only Kuhnhackl could get to it.  Rust went to where you score goals and did just that damn thing.

That’d be the ball game, but there was still some business to take care of.  Malkin and Rust were both on hat tricks and Crosby is still a goal away from his 400th.  As Jones vacated the net for the extra skater, that would be your non-blogger threesome up from for the Birds.  They’d get more than their fair share of cracks at the empty net over the last 2+ minutes of the game.  Crosby would pass up on his 400th to defer to Rust on a very clean look only for BFR to rip it off the bar.  San Jose only cleared the loose puck as far as 71 in the neutral zone.  Rust ended up with another look for the hattie as Burns played sweeper keeper, but he instead passed it off to Gene for the final look.  He would not miss to extend his and Crosby’s, January heaters.

Go ahead and say this win didn’t mean everything to Murr and the gang.

The Pens kick off February’s 12 games with a back to back this Friday and Saturday as they host the Capitals for the first time on Friday before heading to New Jersey for a Saturday night date with the Devils.  Four humongous points at stake against the two teams directly above them and below them in the standings.  LGP.