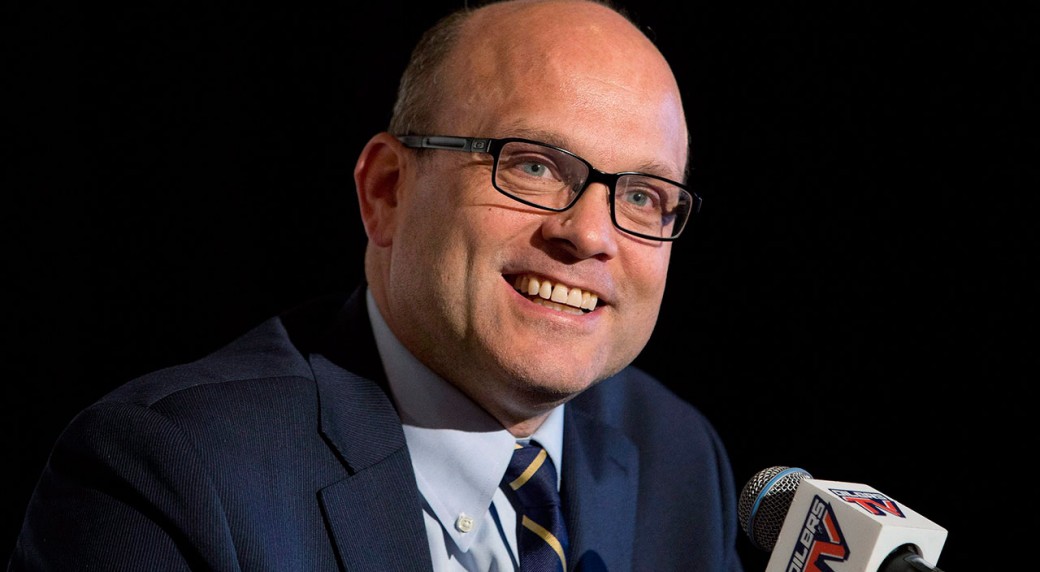 Over the course of the last two days, we have taken a look at the good and the bad of Peter Chiarelli’s first two and half years as GM of the Edmonton Oilers. Today, we’ll wrap everything up and give him a final grade. This exercise was done in order to try and take out the emotions of this nightmare season to see if Chiarelli can be the guy moving forward in Edmonton.

Chiarelli’s ability to win almost every minor trade he makes is quite impressive, and he has been able to get some excellent value from deals that weren’t sexy or headline grabbing when they were made.

Ironically, these were his exact strengths in Boston as well. There really shouldn’t be any surprise that he has fared so well in these areas since taking over the Oilers.

While there is less bad than good on the resume for Chiarelli, it is quite apparent that those bad moves have had a much bigger impact. Chiarelli has moved a franchise forward, a legit top-six forward and two high quality draft choices for a top-four defender and a borderline third line winger. That kind of loss in talent has severely lowered Edmonton’s ceiling and ability to compete night in and night out.

Chiarelli’s handling of the salary cap with the contracts handed out to Milan Lucic and Kris Russell is simply baffling, and it is the exact thing that got him fired from this post in Boston. Those contracts will prevent the Oilers from upgrading their roster for years to come.

The grading scale I’m going with goes as follows:

A: Excellent, one of the best in the league
B: Above average, doing an very good job
C: Average, should keep the job but there is room for improvement
D: Below average, has done more to hurt than help
F: Failure, should be fired on the spot

I’ve decided to give Peter Chiarelli a D for his work with the club over the last two and a half seasons. Bottom line is, Chiarelli has done more to hurt this club than he has to help it. There are certainly good things that he has done, no one can argue that, but the overall body of work has been vastly underwhelming.

I’d argue that the potential for this Oilers franchise is significantly less than it was on the day Chiarelli took over, and that his moves the last few summers may end up being the difference between winning a Cup or not in Edmonton. There was far too much talent bled out from this roster, and now the Oilers find themselves in a very poor spot.

The players absolutely can be better, they do NOT escape blame for this season, but the GM has impacted his roster in a negative way and it has impact this season. There is supposedly a five year plan for Chiarelli and his team. We are in year three and the club is certainly going to miss the playoffs. I think it is fair to question if this “strong plan” is even close to the right one.

I trust Chiarelli when it comes to drafting and when it comes to smaller trades. I’ll almost always give him the benefit of the doubt in that regard. In fact, I suspect he’ll have quite a strong deadline if he does in fact decide to sell.

That said, I have absolutely no confidence in Chiarelli to make the big trade or free agent signing. He has proven time and time again that he is not capable of doing that, dating back to his days in Boston. I’d love to believe he can change, but I’m going to bet on consistency here and say that won’t be happening.

I’d be far more comfortable with a GM who has a legit understanding of the salary cap and who I trust to make a big move. The Oilers don’t have that right now.

Chiarelli has been below-average since taking over, and almost three years in his five year plan is looking poor. He should be on the hot seat as we move forward.