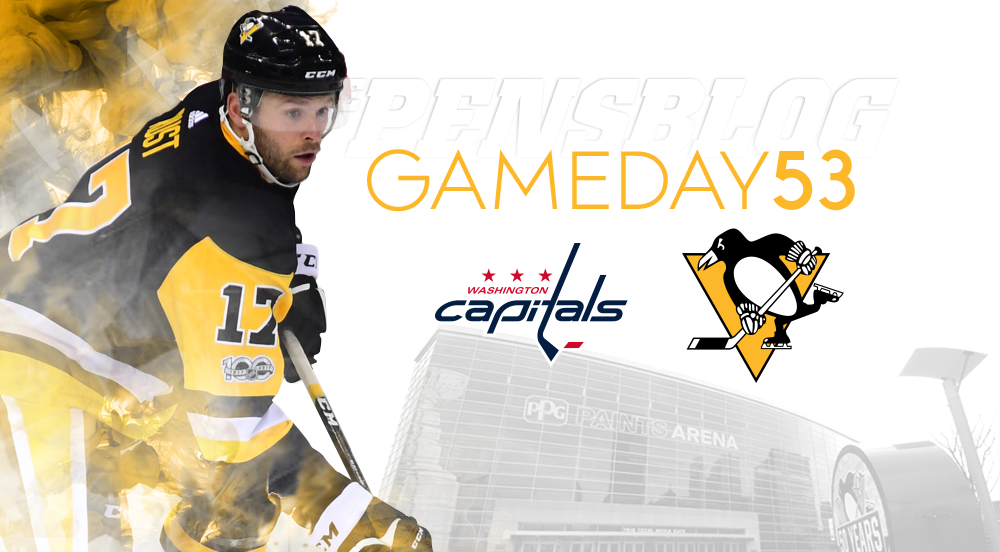 The Washington Capitals are on top of the Metropolitan Division. If the playoffs started today the Washington Capitals would play the Penguins in the second round. Stop me if you’ve heard any of that before. Tonight the Penguins welcome the Capitals into Pittsburgh for the first time this season as the two meet for just the third time. The first meeting came alllllllll the way back on October 11th, a 3-2 Penguin win in Washington, and the second was a 4-1 Capital win one month later on November 10th, also in Washington. In all honesty it’s a blessing from above that the Penguins didn’t play the Capitals in December. It isn’t December anymore, and the Penguins play through January showed the entire league that they are kind of series about this whole 3-peat thing. Tonight is a great test of how far the team has come since the “flipping of the switch.”

So how has Washington climbed to the top of the Metro despite having a third defensive pairing of Brooks Orpik and Madison Bowey? The team is currently enjoying an above average 10.1 shooting percentage on the season along with a 101.6 PDO, neither of which is too much of a red flag for a collapse. The truth is the Capitals just know how to win in the regular season, and this season is a testament to that considering they started the year with 4 NHL defenders. They haven’t been spectacular by any stretch of the imagination, the Capitals are 3rd in the Metro in goals for, 8th in the league with a 20.9% success rate on the powerplay, and 18th in the league in penalty killing. Regardless the team has been able to go 6-2-2 in their last ten and have a comfortable 6 point cushion over the second place Penguins, a statement that scares zero Penguin fans.

It’s no secret that the Penguins started playing a more cohesive game in January, and there is no reason to expect we won’t see more of the same in February. The month is the lightest on the Penguins schedule with just 12 games in 28 days, including three 2-day breaks and one 4-day break. The team does have three back-to-backs this month with tonight being the first half of the first one. The good news for the Penguins is after February they only have 5 back-to-backs left, which means that including this weekend 16 of the teams 29 remaining games are back-to-back scenarios. In a Metro race that is tighter than Phil and Geno these points are crucial to say the least.

Conor Sheary is labeled week-to-week with a lower body injury and will hopefully spend the time off looking for his game. Due to Sheary’s injury Bryan Rust moves up to the top line and Ryan Reaves comes back to the lineup. A giant part of me hopes that Reaves and Wilson destroy each other tonight so that neither of them can play the rest of the year. By putting Reaves back on the 4th line that is centered by J.S. Dea you can pretty much assume that Tom Kuhnhackl will be the TOI leader of the trio and most of that time will come on the penalty kill. Sullivan reported that Hunwick will return to the lineup when he is healthy, here’s to hoping he isn’t. Carter Rowney (remember him?) practiced yesterday for the first time this year but will not play tonight. Hard to go against Murray in this one, but it is a back-to-back situation with a potentially more important two points against the Devils tomorrow night.

As for Washington, Tom Wilson in on the first line. It’s almost impossible to look at these lines and not see the enormous advantage the Penguins have over the Capitals third pairing regardless of which of the top three lines Sullivan uses. The Capitals have attempted to mask their defensive weaknesses by putting one veteran NHLer with one of lesser experience. It has obviously worked so far this season, but a 7 game series is another animal.

Are you high Rad?!? Hagelin has been ridiculously snake bitten so far this season, but tonight he has a huge advantage over 5 of the 6 Capital defenders. If Sullivan can get Hagelin-Malkin-Hornqvist out against the Orpik pairing Carl Hagelin is going to torment them with his speed. Even against the second pairing Hagelin has the potential to take Orlov out of the game. It wouldn’t surprise me at all if he gets an assist or two or at the very least plays a crucial part in some goals like Hornqvist did against San Jose just by pressuring. Look, I’m not a big proponent of “booing” players that haven’t done anything to deserve it. I’m also pretty adamant on Twitter about not letting your biases towards Crosby result in you sitting back in 20 years wishing you would’ve paid attention. The same is true with Ovechkin, so in the spirit of good hockey players he is someone you want to watch. These players aren’t going to be around for another 10 years, so the chances of seeing Crosby, Malkin and Ovechkin on the same sheet of ice are starting to dwindle, don’t waste them.

The Capitals in the regular season are always a force but the Penguins also love playing against the Capitals. Many players talk about how seeing Washington on the schedule gets them a little more pumped up and ready, and if that is true I can’t wait to see what the Penguins bring to the game tonight considering how they’ve looked in their last 10.