Hope and Passion vs. Mystique: An Eagles vs. Patriots Super Bowl Preview 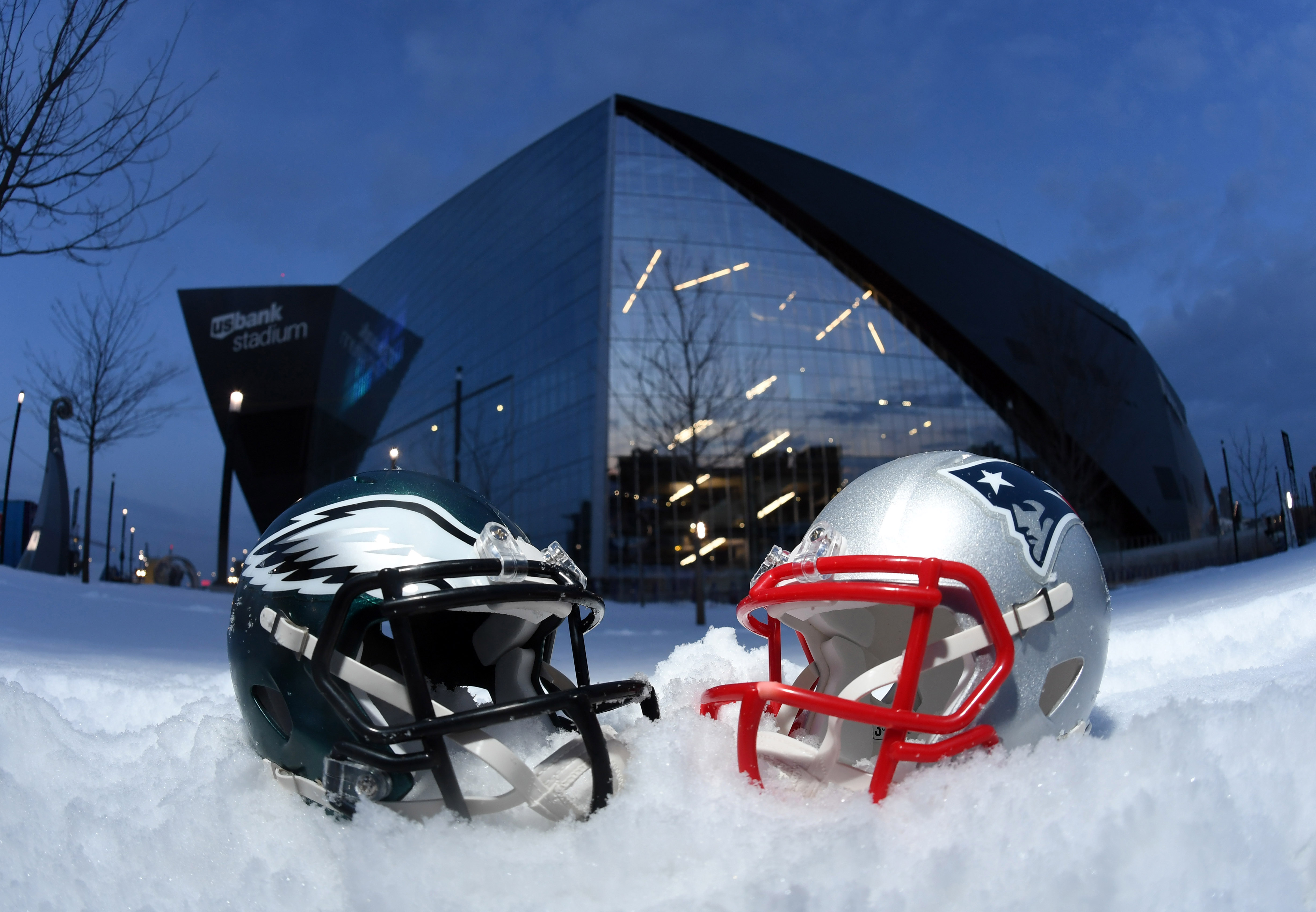 Hope and Passion vs. Mystique: An Eagles vs. Patriots Super Bowl Preview

Allow me to pose a question. What do you see when you see this logo?

What you see may be dependent on what part of the country you live in. If you live in the New England area, you see excellence, a dynasty, and over 15 years of NFL success since 2001. You see the men behind that logo as legends, absolute Hall of Famers at the quarterback position (Tom Brady) and the head coach (Bill Belichick). You see a team that has gone through scandals (“SpyGate”, “DeflateGate”) and weird circumstances (Aaron Hernandez) and still come out on top.

There’s a certain level of mystique to that logo.

If you live outside the New England area (and are not a Patriots fan), you see cheaters and arrogance for the most part. You see a team that’s been able to maneuver around things like “SpyGate”, “Deflategate”, and Aaron Hernandez (and the “Tuck Rule”) to maintain a level of greatness that the NFL hasn’t seen since the San Francisco 49ers of the 1980s. You likely hate Brady and Belichick and openly want them to lose. You root against them every chance you get.

There’s also a sense of exhaustion with this logo.

What do you see when you look at this logo?

Again, that’s dependent on where you live. If you live in Philadelphia or the surrounding suburbs and area, you see your team — a team that hasn’t been to the Super Bowl since 2004 and has never won a Super Bowl. (They won the NFL Championship in 1960, but the “Super Bowl” that exists today didn’t exist until 1967 — seven years after that Eagles championship.) You’ve seen a team that has gone through a dominant period of success in the NFC in the 2000s only to appear in one Super Bowl. From Dick Vermeil to Andy Reid to Chip Kelly, Doug Pederson and every coach in between, all you’ve known is heartbreak and disappointment, but you still have hope that this year is their year.

There’s a level of hope embroidered in this logo with its fans.

There’s apathy in this logo.

Those two logos and their respective teams meet this Sunday in Super Bowl 52 in Minnesota. The mystique of the New England Patriots versus the pure passion and hope of the Philadelphia Eagles. It’s a rematch of Super Bowl 39 — a match the Patriots won 27-24 in Jacksonville, Fla.

Not much has changed with the Philadelphia Eagles since then. Obviously, the coach (Doug Pederson) is different, and many of the players are different. The hope and passion within this team haven’t gone away, though. That is impossible. There is an unlimited supply of both. In fact, I’m pretty sure the Eagles have never tapped the emergency reserves of hope and passion.

One thing feels a little different, however, the mystique of the Patriots has dwindled a little. Is it because Tom Brady is 40? Is it because Bill Belichick is in his eighth Super Bowl appearance? Whatever the reason, this feels different. Sure, the Patriots are still intimidating, but they don’t feel as intimidating as they should. They’re vulnerable. They can be beaten.

To quote Tony Burton (the actor that played “Duke” Evers in “Rocky”) from “Rocky IV” when Drago was cut:

Yes, the Patriots run like a Swiss watch. They have for the entire Brady/Belichick era. You can never believe you have this team beat until the clock strikes zero in the fourth quarter. This is a sad realization the Atlanta Falcons learned last year, and it’s one the Jacksonville Jaguars learned two weeks ago. Assume nothing.

There are wrenches the Philadelphia Eagles have that they can throw in the gears of the New England Patriots machine. We’ve seen team after team utilize this blueprint against the Patriots in the Super Bowl:

If there is one thing that is going to be the Patriots downfall on Sunday, it’s their defense. Going into Sunday’s game, New England has the NFL’s 29th ranked defense. (Have fun with that, Detroit Lions. The man behind the NFL’s 29th ranked defense, Matt Patricia, is your next head coach.) That rank is the lowest ranking for a Patriots Super Bowl team since 2012 (Super Bowl 46) — where they lost 21-17 to the aforementioned New York Giants.

The Eagles have the NFL’s seventh-best offense according to Pro Football Reference. They’re in the middle of the pack in terms of passing (13th), but they’re third in the league in rushing, sixth in rushing attempts (473) and tied for second in yards per rushing attempt (4.5). This leads to the next thing.

If the Eagles run the ball with success, they control the clock. If you control the clock, you limit how long Tom Brady is on the field. In both Super Bowl losses and the 2017 AFC Championship Game, the Patriots were dominated in time of possession.

In Super Bowl 46, the Giants held the ball for almost 15 minutes longer. The Eagles led the league in time of possession average with 32:44. This comes with a caveat. If the Eagles are holding the ball that much, they MUST score on at least half of their possessions. Too many “three and outs” means the Eagles lose. Too many possessions without points means the Eagles lose. The Eagles were sixth in the league in Sc% — a percentage of drives ending in an offensive score — at 41.1%, so that bodes well. The Patriots were tops in the league at 48.2, so the defense has to get stops.

In order to get stops, the Eagles defense must get pressure on Tom Brady. If you let Brady sit in the pocket and tear you apart, why are you even playing defense? Playing zone coverage all game is a bad idea. Playing man coverage all game is a terrible idea — because no one in the NFL can man-up with tight end Rob Gronkowski.

What’s the alternative to this? Do what you can to fluster Brady, and if possible, put him on his back. The Eagles are well equipped to do this with defensive ends Brandon Graham, Derek Barnett, Chris Long, and Vinny Curry. They also have the NFL’s best defensive tackle in Fletcher Cox — a player who cannot be single-teamed under any circumstances.

Eagles defensive coordinator Jim Schwartz has done a fabulous job getting pressure on opposing quarterbacks this season. While the Eagles don’t have high sack numbers, they have other numbers to support the fact they get tons of pressure.

As stated by Sam Monson of Pro Football Focus, the Eagles led the league in total pressure and had 41 more quarterback pressures than the team in second place. The Eagles are also the only team to generate pressure on 40 percent or more of pass plays. That will be the biggest key on Sunday. If the Eagles get that kind of pressure on Tom Brady, it might be a long day for the Patriots quarterback.

The last point is simple: don’t turn the ball over. If you give Brady and Belichick extra possessions or a short field, you’re signing your own death warrants. Don’t give this team free possessions. Don’t give them free points. Make the Patriots work for every touchdown and every field goal.

Let me add something to this list. Don’t be infatuated by the mystique of the logo. The Patriots are good, but they’re not as good as they have been. Play like you can beat them. Play like you want it more than they do. Brady and Belichick are still Brady and Belichick, and they adapt quicker than the Borg from “Star Trek”. That doesn’t mean they can’t be beaten if you readjust to their adaptations.

Like they have been in every game in this playoff run, the Eagles are the underdogs again. When the opening line for this game was released, it was Patriots -6. As of Thursday, that line went down to Patriots -4.5. The line will probably settle somewhere around Patriots -4. They still are the Patriots, and they are to be respected.

These Patriots are vulnerable.

These Patriots are beatable.