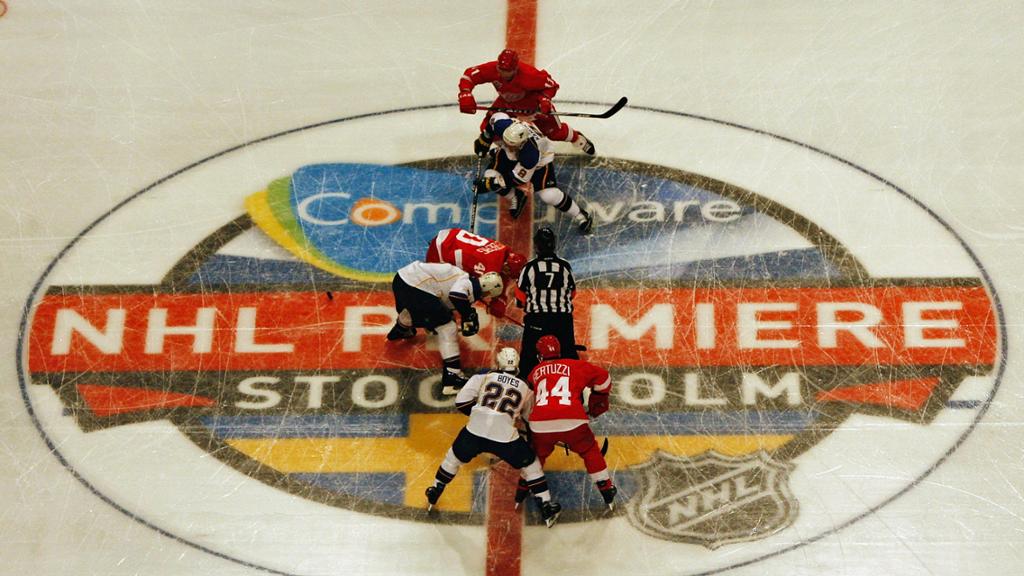 During the hullabaloo that is the NHL All-Star weekend, next seasons round of overseas games were announced. The Oilers will be playing two games in Europe during the next hockey season.  One will be a preseason game in Germany and it appears right now as though it’ll be against a German team. The Cologne Sharks, coached by Leon Draisaitl’s father in his home town, seem to be a likely candidate. After that the Oilers will travel to Sweden where they will face off in a regular season game against the New Jersey Devils who will be coming off an exhibition game of their own in Switzerland. The Winnipeg Jets and Florida Panthers will also be facing off in a regular season game in Finland.

Games in Europe are fun, different exciting but there’s one thing I don’t get. My question to all of this is simple. Why? What exactly is the leagues goal here? NHL teams have been playing games over seas since 1936, but I’m still not sure what the benefit is to doing it at this point. The line that comes out is “growing the game”; let’s be very clear about this line, the NHL’s interest isn’t to grow the game, the NHL’s interest is to grow the NHL. Especially when it comes to games in places like Sweden, Germany, Switzerland and Finland. The game of hockey itself is doing fairly strong there, all 4 countries have their own leagues that have all enjoyed success to varying degrees. One or two NHL games a year isn’t bringing the sport to new people in any kind of overwhelming fashion.

The same may not be able to be said about games in China, but the NHL already has shot itself in the foot with the Asian market by not going to PyeongChang. If anything the Olympic hold out may be the best example of the NHL’s interests being themselves over the sport. They felt they had nothing to gain financially and thus chose not to go. In true NHL fashion that appears to be backfiring spectacularly as NBC vows to not air a single NHL game during the Olympics when NHL players could have been the feature of the games across the world on NBC’s platform. Instead they won’t even be on TVs in their own country. I’ve said it many times before; the NHL is successful in spite of itself. But I digress.

The point is, the NHL doesn’t do anything unless they think there’s a payoff for them. So what do they think it is with games in Europe? While the Lanxess Arena in Cologne has seating for over 18,000 in its hockey configuration, many of the arenas are smaller than the NHL standard. The Ericsson Globe Arena in Stockholm has a capacity for hockey of only 13,850 and the limited supply hasn’t exactly lead to a surge in prices with tickets being available for around $50 US. That’s not a lot more than the revenues seen from games in many US markets. Meanwhile, the Devils being the designated home team will lose one of their scheduled home games and the revenues that come with it. On top of the extra travel and costs and toll it takes on players I’m not entirely sure where the cost balances out.

The truth is probably boring a simple. TV Broadcasting deals and NHL.tv subscriptions. Getting more games aired in more countries for more money. But given there are broadcasting deals in place in most countries and that I like to let my mind run with this type of thing a little bit. This is where things are going to get purely speculative, hypothetical and a little bit idealistic, ignoring obvious road blocks.

I like to wonder if these games are the NHL’s way of getting its foot in the European door. A way to start getting the idea of NHL run games in Europe to be a little more common place in an effort to start a European league. The obstacles are obvious, resistance from existing leagues, the IIHF, Russia as a whole, etc. As someone looking at the hockey landscape in Europe from the outside, it looks messy. Every country has its own league with too many teams and talent is spread thin. I think it’d be interesting if there was some form of unified continental league, maybe something that would start small with maybe only six or eight teams.

There has been some speculation in the past of the NHL expanding to Europe but for that to even be feasible it would have to be an entire division as opposed to one team. The travel and scheduling would be too much, for this reason I think a spate league makes more sense. The first teams would be in strong hockey markets such as Stockholm, Helsinki, Zurich or Bern, Cologne, Berlin and Prague. Then you would also target major European markets like London and Paris. Russia would provide the most resistance and the KHL is Europe’s strongest league but it’s also rather unstable so maybe down the line teams in Moscow and St. Petersburg would also be added.

The benefits would be a concentration of the talent in Europe and getting more competition across the continent instead of just within individual countries. If there were fewer teams in a league with the clout to draw the higher end talent in Europe, fans would see an increased level of competition and the NHL may in fact actually grow the game. From there if successful, maybe expansion could take place further to more optimistic markets like Madrid, Barcelona, Rome or Istanbul. All with the NHL’s brand on it. With enough success we could see a series between the top teams from North American and European leagues to determine a World Champion.

This kind of idea isn’t completely unheard of. The NFL has toyed with a European league in the past but the difference here would be that hockey is an established sport in Europe already whereas football means something completely different everywhere else in the World outside of the US and Canada. Am I dreaming? Absolutely. Is the NHL even competent enough to pull off such a feat? As of now, it doesn’t appear so, no. Would current leagues an smaller European hockey markets be upset? Almost definitely. But it is a fun idea to toy with.