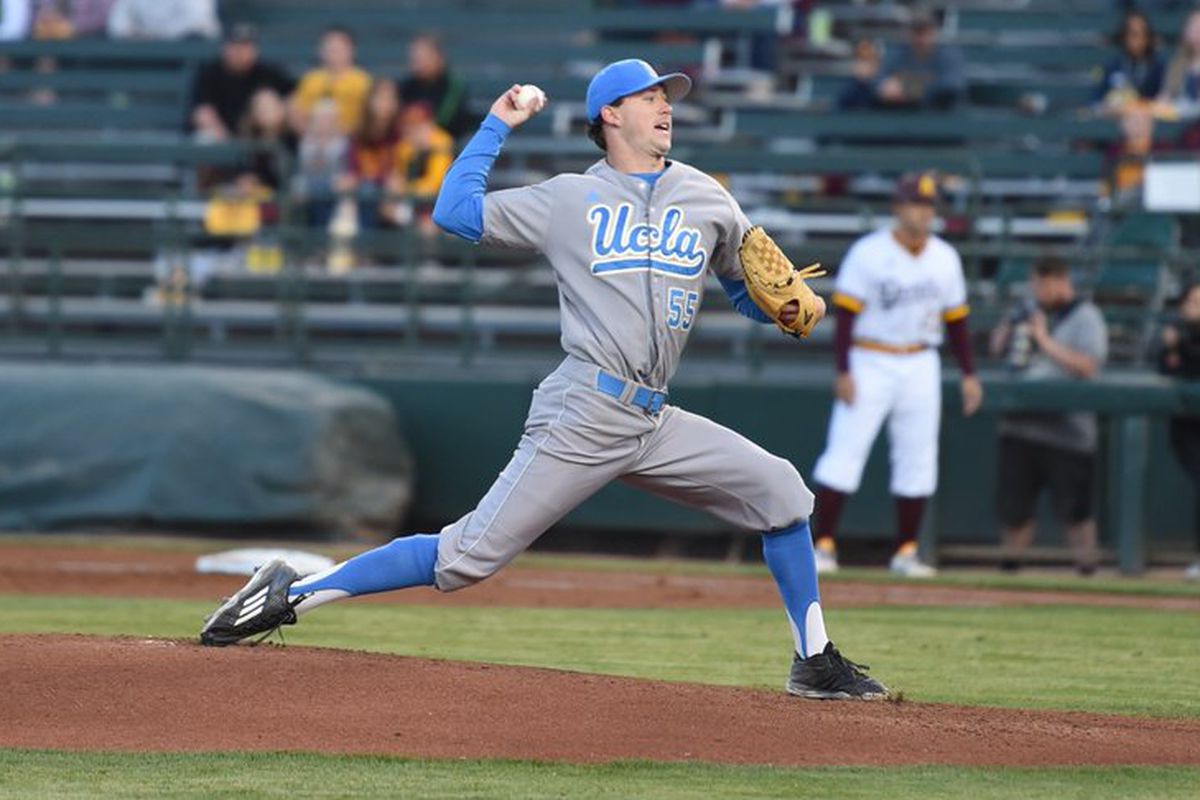 *20-80 scale.  20 is not existent, Major League average is 50.  Good Major League is 60.  Great Major League is 70.  The best I’ve ever seen is 80.  These aren’t given very often.
Floor: Back end of the rotation starter in the major leagues.
Ceiling: Front of the rotation starter in the major leagues.
Likely Outcome: Middle of the rotation starter in the major leagues.
Summary: Griffin Canning is a fun prospect.  It’s fun when you can draft a kid that’s pretty much major league ready, and you don’t necessarily need to invest a lot of time developing.  It’s fun for me when I can watch a kid and know with certainty that he’s probably going to be a major leaguer.  And it’s fun for the fans when the Angels can draft a  local product that is himself, an Angels fan.  And finally, it’s fun when you get a first round talent at a second round discount and inevitably will get to see the rest of the baseball wonder just how they missed on this kid.
All the signs were there.  Griffin Canning – similar arsenal to that of Zach Greinke, comes from pitching powerhouse UCLA, posts impressive numbers in his career, and before being drafted, reports had him going anywhere from fifth overall to twenty fifth.  There are no durability concerns, he throws strikes, no red flags…
Then the medical report comes out.  There’s no damage at all, just signs of wear, which is expected of a kid that has pitched for as long as Canning has, at the level that Southern California high school and colleges demand.
Other major league teams over-thought it.  They asked themselves too many “what if” questions, which just isn’t healthy for anyone.
Not the Angels.
They scooped Canning up in the second round of the draft and immediately have one of those guys that will inevitably be labeled “steal of the draft.”
Canning has the necessary tools to pitch at any part of the rotation.  His fastball sits 92-93 with a ton of action in on right handers.  Griffin’s best pitch is likely his change up, that he uses the same arm speed and release with, but spins it in at 83-84 mph with sink.  Canning also has an excellent big bending curve that he throws 78-79 and a tight slider that he throws around 82-83.  The curve he can use against lefties and righties, but the slider looks like it can be death on a righty.  Canning has a pre-release hitch that can make his motion a little “herky-jerky”, but it serves to throw the timing off hitters.  Possibly what makes Canning the most dangerous of all, he can throw every single pitch for a strike in every count and every situation.
Hitters really have no choice but to keep guessing.  Scouts believe all four of his pitches are average or better, and really the only part where myself and the larger publications disagree is his curve ball.  I see the making of a “plus” pitch whereas other talent evaluators see it as a major league average pitch. Canning’s change up definitely leads to a lot of routine ground balls, as do all of his pitches but most specifically the change up.  That’s a “plus” pitch no matter who you ask.
Upon selecting Canning, the Angels shut him down.  No more pitching, just stretching and staying loose.  This was for two reasons.  The human body is an amazing organism.  When there’s evidence of wear and tear on most parts of the body, not using that part yet keeping it mobilized allows for healing.  Most specifically for baseball purposes, the elbow and shoulder.  The second reason, Canning had already accumulated a full workload this season.  The Angels try to keep their pitching prospects around 120-150 innings if they are fully healthy.  Canning threw 119.  So he’s good.
With a clean bill of health, we can expect to see the Angels allow Canning to progress as far in 2018 as he’s ready for.
What to expect: It will be interesting to see just how far the Angels will push Canning.  If the Angels choose to be aggressive, Canning has the ability to start the season in AA and pitch in the majors after the all-star break.  If they go the conservative route, we could see Canning spend the year at Inland Empire.  The likeliest route they’ll take is an early placement at Inland Empire, then within a month or two a promotion to AA, then a quick promotion to AAA Salt Lake to end the year.  It will be interesting to see if Canning has to shake off any rust after not throwing competitively for eight months.  I’ll also be interested in seeing what major league hitters make of his fastball.  The combination of movement, velocity and location were way too much for college hitters to handle.  But professionals might find a way to turn on a heater that tails in toward the inner half of the plate.  So while Canning is a ground ball pitcher, if hitters figure him out, he could show a propensity to give up the long ball.  I doubt this will be a problem, but to me it seems like something worth watching.
Estimated time of arrival: 2019, Griffin’s age 23 season.
Grade as a prospect: B
Grades Explained: Grade A player is a future superstar.  Grade B player is a future regular.  Grade C is a fringe major leaguer.