Your Morning Dump... Where Rozier faces a tough challenge today 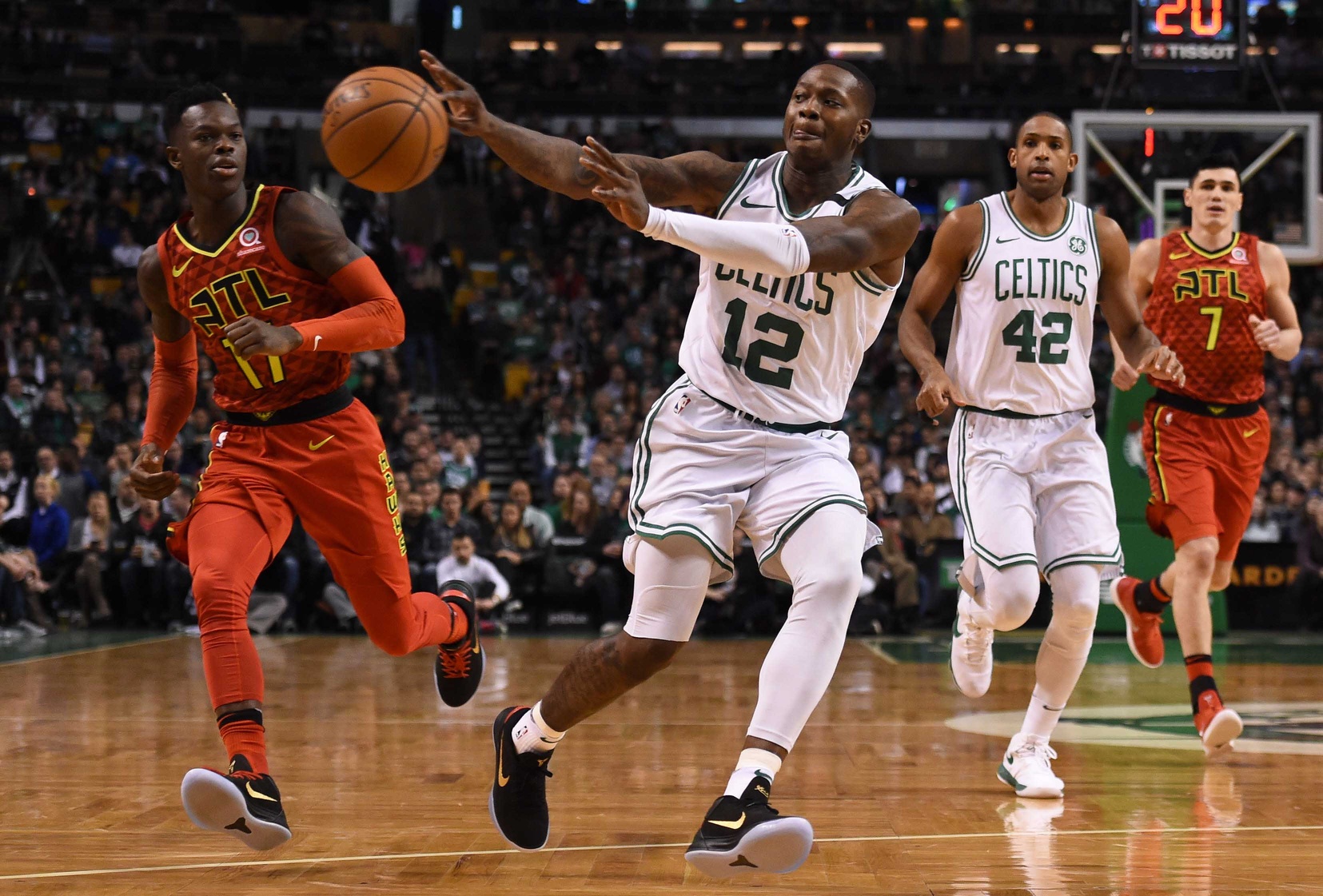 Your Morning Dump... Where Rozier faces a tough challenge today

“He shot it great (against Atlanta),” Stevens said. “Obviously, he got the triple-double the other day. But I think he’s playing a lot of minutes and I don’t know what his per-36 or per-48 numbers are, but he doesn’t always play 36 and 38 minutes in a game like he is now. But he’s a really good player, and he’s gotten better. He’s playing very confidently. And we’re going to need him to play very confidently (today) because this group coming in is pretty special, especially in the backcourt.”

“He’s come a long way. I was always just impressed by his ability, but you don’t know if that’s going to translate,” Horford said. “For him the more that we’ve played him, doesn’t matter the positions we put him in, he just keeps learning and growing and he’s playing the right way. He’s playing aggressive, but what I like most about him is that he really commits on the defensive end, rebounds great. I’ve just been very happy to see his progress and I know that he’s going to continue to get better.”

Terry Rozier had a great game against Atlanta… BUT… it’s easy to forget the Celtics were down at halftime mostly because Rozier’s counterpart, Dennis Schroder was doing anything he wanted in the first half. That’s not entirely Tito’s fault, but he does bear a fair amount of responsibility for not keeping Schroder out of the lane.

Today, Rozier will be tabbed to start again and this time he’ll be facing Damian Lillard and C.J. McCollum, about as daunting an offensive backcourt as you’ll find in the NBA.

My point here is this… will those of you who see Rozier’s two-game explosion as a sign that certain players are expendable still feel that way when Rozier goes back to shooting 40% from the field like he has all season instead of 61% like he did against the Hawks? What if chasing the Blazers backcourt around all day tires him out?

Will you still feel the same then?

This is where it’s important to look at the process more than the results. Rozier has done a tremendous job filling in as the starter and his emergence has shown it might be better to keep him long-term than deal with Marcus Smart’s delusional agent. But it hasn’t proven anything beyond a shadow of a doubt.

The Celtics current cap situation might be Rozier’s best friend at this point. Rozier has one more guaranteed year on his rookie scale contract ($3.05 million) where has Smart is, as we’ve discussed, a restricted free agent. It’s very convenient for the Celtics that Smart’s sparring session will cost him just enough time to get through the trade deadline, where the Celtics can truly gauge the league-wide interest in Smart.

This is where Ainge takes advantage of situations.

This testing of the trade waters is twofold:

1: It sends Smart a message… “hey, look at what happens when you do dumb shit.” Life comes at you fast… one day you’re angling for $20 million a year, the next your teammate is thriving while you’re picking shards of glass out of your arm and watching your value plummet.

2: It gives Ainge a heads up on what the league things Smart’s value is. If people are unwilling to offer even a late first round pick for Smart right now, they’re not exactly going to line up to drive up his price in free agency. If Ainge sees a strong market for Smart, then he can cut his losses and get a pick for a guy who’ll be too expensive to keep anyway.

However, if Ainge sees a weak market, then he can simply let Smart sit there as a restricted free agent and watch all the money swirl down the drain before going back to Boston on a well below-market value contract.

You might not like Marcus Smart’s shooting (who does?), but there’s no denying he generally makes a positive impact on the court. Yes, he has lapses in judgement, but it would have been great to have him against Golden State, right?

Rozier’s explosion plays right into Ainge’s hands because he make Smart look expendable. But if the Celtics can keep both guys, why not? Even if it becomes too much talent, there’s no rule against trading players later.

For now, though, these guys can only do what’s in front of them. For Smart, it’s sit and wait to get healthy and wonder how it’s all going to play out. For Ainge, it’s the constant dance of assessing talent and value and figuring out where everyone can fit in the salary cap sheet.

For Rozier, it’s about taking advantage of this opportunity and making the most of it. At noon, he’ll face one of the NBA’s most dangerous backcourts… giving him the chance to increase his own value to the franchise and, maybe, reshape the team’s future plans.

Related links: NBCS Boston: When it comes to Marcus Smart’s value, don’t get it twisted  |  Report: Celtics willing to trade Smart for first-round pick  |  Without Kyrie, Celtics’ kids get to show off

The question is whether Tatum has slammed into that proverbial rookie wall. In his past 20 games, Tatum, whose 3-point percentage was above 50 in the season’s first two months, has made just 31.3 percent of his attempts.

That 20-game stretch coincided with a dislocated right pinky sustained on Dec. 20 against the Miami Heat. Team doctors popped the pinky back into place but swelling remains and it has affected how Tatum grips the ball.

“I don’t want to blame my finger [for shooting issues], but obviously when it first happened it did bother me,” he said. “I never played with tape and it’s still swollen because it gets hit every game and I don’t tape it. It’s tough to grip the ball when I tape it, so I don’t tape it. I’ve just got to get used to it.”

Let me just start by saying I picked this quote out of context from a much larger piece on Jayson Tatum’s relationship with his father. It’s a really interesting read on how Tatum’s dad is always texting him after games. It goes deep into their past and it’s really good so go read that.

Still, in the middle of it all is that passage which shows Tatum’s dislocated finger more than a month ago has lingered.

As an old, grizzled former player who used more tape than most teams, I’ll just say to Tatum… tape the damn finger and get it right. Otherwise you’ll look like Lionel Hollins… and no one wants that.

Look, I’m as happy as anyone to bury the Cavaliers… especially after the way they got embarrassed on national TV last night.  But this is a bit dramatic, don’t you think?

It’s dangerous in the NBA to overreact; it gets people fired and it costs people wins, respect and money. The season is long, and that makes it forgiving, which is why anyone who has much experience preaches patience.

But the Cleveland Cavaliers are out of time. It’s preposterous to say that in February for a team with a history of turning things around and doing it when they have to. However, they are in a preposterous situation.

Maybe I’m being extra cautious here, but I’m not getting lulled into an early February “oh man the Cavs are such toast” conversation again.

This one might feel different to some people… LeBron might be paving the way for his exit… but I’m not buying it. In fact, this fall is so precipitous… so egregious… I’m suspicious of the whole thing.

Tell me, what would people say if LeBron led this dysfunctional bag of bones to the NBA Finals?

Wouldn’t people like Windhorst be gushing over the level of LeBron’s greatness? Wouldn’t people be saying things like “LeBron should get a ring just for getting these guys to the Finals?” Wouldn’t the story of LeBron taking such a lost cause and galvanizing them into a cohesive unit be the kind of story that just gets the media hoards all in a tizzy?

You can’t tell me that LeBron can’t turn it on when he wants and get these guys going. You can’t fool me with 40 point losses.

They’re falling too hard. Something smells funny here and I’m not buying it.

Hell I wouldn’t put it past LeBron to freak the F out on Paul Pierce day and go for 50. I’d encourage you all to not buy into the hysteria either.

Globe: What the Celtics could do at the trade deadline

NBCS Boston: Celtics third quarter play is something to admire  |  Kyrie to miss third straight game due to quad injury