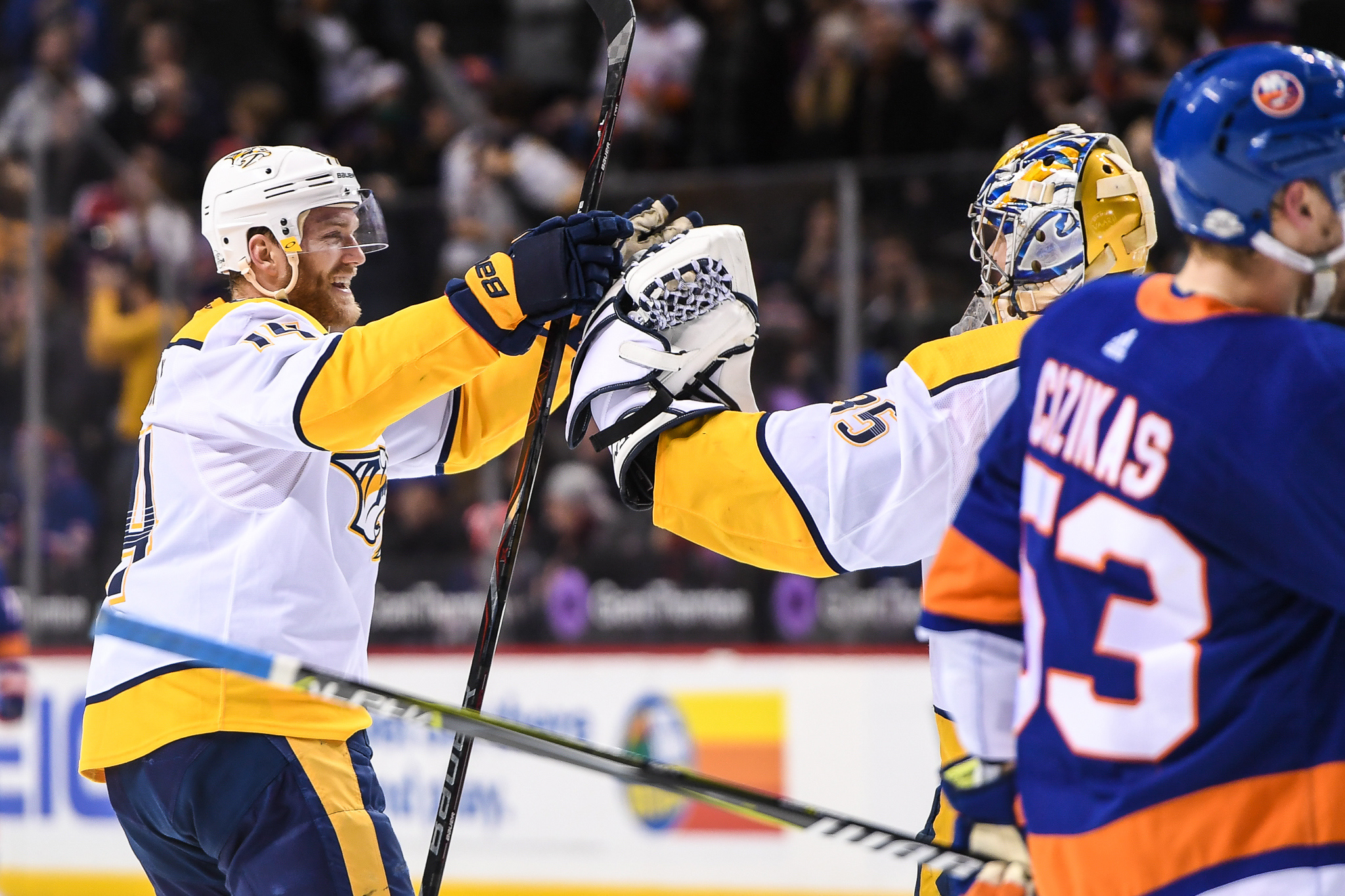 NEW YORK — The Islanders will take the point they picked up on Monday night, but the sting of what could have been a two-point night and a big win over the Nashville Predators will still be there.

New York let a two-goal lead slip away after giving up late goals in the second and third period, and then watched Roman Josi score the game-winning goal with 1:18 remaining in overtime to give Nashville the 5-4 win. Josi took the puck into the Islanders end and flipped the puck over to Nick Bonino, who quickly moved it back to Josi for the goal.

The Islanders did move into the final wild card spot in the Eastern Conference with the overtime loss, but the game was far from pretty for New York. The Central Division-leading Predators outshot the Islanders 37-20 through the first two periods of the game, which was the 20th time the Islanders have allowed at least 30 shots on net in a game.

Starter Jaroslav Halak made 42 stops on the night in the loss and has now faced 37 or more shots in 14 of his last 17 starts for the Islanders.

“Jaro was for sure our best player out there and he made some massive saves at some big times. We have to do a better job in front of him,” Casey Cizikas said.

Despite the lopsided shots advantage for the Predators, the Islanders had a 4-2 lead through most of the second period. It wasn’t until the final five minutes of the second that Nashville finally got a shot by Halak and cut the Islanders lead to one.

A shot from the point was stopped by the Islanders netminder, but the rebound fell to the ice and Calle Jarnkrok swept the loose puck into the net.

The Islanders played much more solid third period, holding the Predators to just six shots on net –including just two shots through 14:06 of the third — and generated some pressure on the Predators. However, Pekka Rinne made a number of spectacular saves to hold off the Islanders and keep his team in the game.

Then with Rinne pulled and the clock winding down, A shot from the point from Subban was stopped and the rebound went right to a waiting Ryan Johansen for the tying goal with 42.2 seconds left in overtime.

“They obviously do a good job of getting pucks on net,” Andrew Ladd said. “The puck came off a rebound and found their guy’s stick. The third period, I just thought we did a better job of putting the pucks behind their (defense) and making them come the whole 200 feet. Something we didn’t do the first two periods.”

It was another disappointing result for the Islanders, which were coming off an encouraging comeback win over the Columbus Blue Jackets on Saturday night. The Islanders have been on the losing end of three of their last four games since returning from the All-Star break and have gone 5-4-2 since their bye week last month.

The Islanders have been outshot 186-127 through their last four games, with the lowest volume of shots coming in their 4-1 loss to the Florida Panthers on January 30.

“We just have to be harder on pucks and get a chance to get them out and get them in,” John Tavares said. “We have to try to limit their opportunities and their shots and generate more our way.

Cizikas added: “I think we found out a lot about ourselves and what we have to do to be successful and just how hard it is.”

The Islanders jumped to an early lead in the first period off a power-play goal from John Tavares 4:55 into the game. Kevin Fiala scored twice in a span of 1:28 to put the Predators ahead 2-1, but Ryan Pulock scored less than a minute after Fiala’s second goal to tie the game at two at 14:05 of the first.

Cizikas Gave the Islanders back the lead with a late first-period goal and Nick Leddy scored 3:39 into the second period to put the Islanders up 4-2.

This and That… The Islanders played with five defensemen for the final two periods of Monday’s loss. Scott Mayfield suffered a lower-body injury in the first period after block a shot from P.K. Subban. Islanders head coach Doug Weight did not have an update on Mayfield after the game… Nick Leddy scored a goal for the second consecutive game after he snapped a 30 game goal drought on Saturday night against Columbus… Josh Bailey set a new career high in points (57) and assists (44) with his assist on John Tavares’ first-period goal. Bailey’s previous career bests were set last season and this year accomplished the feat in 32 fewer games.