Your Morning Dump... Where Horford's Heroics Give the Celtics Four Straight Wins 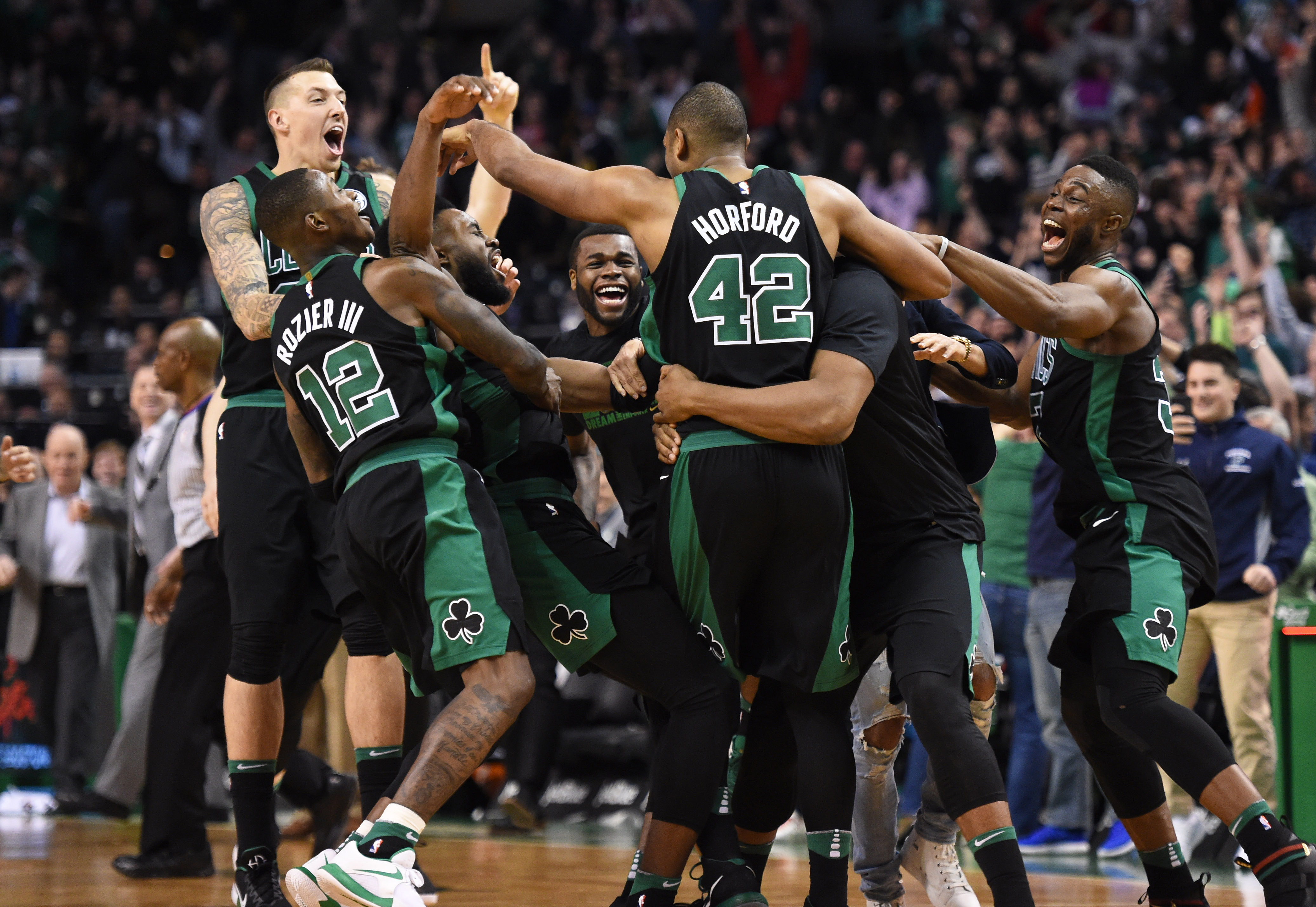 Your Morning Dump... Where Horford's Heroics Give the Celtics Four Straight Wins

Coach Brad Stevens instructed Jaylen Brown to inbound the ball to Al Horford and then immediately get it back on a handoff so he could attack. But Stevens quickly surveyed Portland’s defensive alignment and determined that was no longer the best option.

Horford was within earshot, and he heard the change of plans loud and clear.

“Keep it,” Stevens told him. “Keep it, and be aggressive.”

Horford was defended by rangy forward Al-Farouq Aminu when he caught the inbounds pass near the top of the key. He took two strong, righthanded dribbles with his back to the basket, clearing just enough space for a 16-foot fadeaway jumper that slid through the net at the buzzer, giving Boston a 97-96 win, its fourth in a row.

After the shot went in, as a rowdy TD Garden crowd roared and jumped and smiled, Horford was mobbed by his teammates, or at least those who were healthy enough to play. The Celtics were once again without Irving (thigh), Marcus Smart (hand), Marcus Morris (hip), and Shane Larkin (knee).

But once again, it didn’t matter.

What a game. By far the best professional sporting event I watched yesterday. The Celtics secured their fourth straight victory and second one-point win of the week after defeating the Blazers 97-96.

Injuries are destroying the Celtics, forcing Brad Stevens to increasingly ride the starters. Al Horford responded with 22 points, 10 rebounds, and 5 assists on 8 of 12 shooting. Of course, he hit the biggest shot of the afternoon, drilling a 20-foot step-back in Al-Farouq Aminu’s face. It’s Horford’s second clutch shot this season, as he nailed this turnaround jump-hook to beat the Rockets in December.

With Kyrie, Smart, and Larkin injured, Rozier was Boston’s only reliable ball-handler, and when he didn’t play, Horford was tasked with point-guard duties. This precarious situation is forcing Stevens to get creative, and the team is winning while relying on mostly rookies and second year players, without any guard depth.

Tatum had 17 points and 5 assists in 36 minutes, while Brown added 16 points, 6 rebounds, and 4 assists. Terry Rozier had the best week of his career, but struggled yesterday, scoring only 11 points on 5 of 18 shooting. However, when the lights were brightest, he delivered, as Rozier nailed a clutch 18-footer with 14 second remaining that temporarily gave Boston a two-point lead.

With the win, the Celtics improve to 39-15, and still hold a two game lead atop the Eastern Conference. This week, they play Toronto on Tuesday, followed by Washington and Indiana, and Cleveland on Sunday. Kyrie is expected to return soon. Heading into the all-star break, the Celtics have the opportunity to firmly establish their Eastern Conference supremacy, let’s see if they can ride this momentum.

Page 2: Does the Rise of Rozier Mean the End of Smart?

While it’s far too small of a sample size to make any strong direct correlation between Smart’s absence and the C’s success over the last couple weeks, it’s fair to say others are already taking advantage of Smart’s absence. Terry Rozier has played the best basketball of his career in the last week while seeing big minutes. Jayson Tatum has found his offensive groove once again as he’s taken a bigger slice of the shot pie (14.4 per game over last five contests), over four attempts higher per game than his season average. Additional injuries to Shane Larkin (knee) and Kyrie Irving (quad) have also forced Brad Stevens to go with Al Horford and Marcus Morris at point forward at times and that look has worked out nicely for Boston’s offense this week.

These developments are noteworthy for a Celtics team that has some big decisions to make not only during the next week at the trade deadline, but for the future as well. Smart is a restricted free agent this summer. Rozier (barring an extension) will be a restricted free agent next summer. It’s very unlikely the Celtics will be able to retain both past next summer with three max contracts already on the roster. It’s just not feasible to invest significant money in two reserve guards and stay within the team’s budget and that’s what will be required when they hit the open market.

While the Celtics don’t have to make a decision on Smart’s future just yet, this upcoming week is one of the last windows they have to do so. The prospect of moving Smart, a crucial fixture of the C’s crunch time lineup all year long, ahead of the trade deadline seems like a bit of a reach upon initial consideration. Danny Ainge and Brad Stevens are huge fans of the point guard and his defensive versatility and his value during a playoff run this year would be important. However, if the team doesn’t think they want to pay what will be required to retain Smart this offseason, moving him now has to be looked at.

Rozier’s last six games: 15.2 points, 6.8 rebounds, 5.0 assists, 1.3 steals, while shooting 47 percent from three. Over this period, the Celtics are scoring 113.7 points per 100 possessions – a figure that trails only Golden State and Houston – while maintaining their league-leading defense. This is happening despite the bevy of injuries.

Earlier this week, it was reported that Marcus Smart is available for a first-round pick. He’s in the last year of his rookie contract, we haven’t seen improvement with his shooting, and Rozier has responded well to the increased playing time. The reaction to the trade rumor was mixed, mostly because Smart has established himself as a fan favorite.

Smart’s shooting percentages portray an inefficient and reckless player who shouldn’t be getting so much playing time. Conversely, the on/off stats indicate the Celtics are better when Smart plays than when he sits. He’s the type of player every championship team needs, an ultra-aggressive guy who only knows one speed and takes pride in doing the dirty work. He has a knack for making clutch defensive plays, and he’s swung countless games during his four seasons in Boston.

I’ve come to adore Marcus Smart, and I’d love to see him have a long career as a Celtic. But given his contractual situation, the team’s personnel, and considering the future payroll, I think it’s sensible to trade Smart if we can get a rotation player and a young asset. I’d hate to see him go for a 1st rounder in the 20’s, and I don’t think Ainge would settle for that, but if we can get good/cheap players, I’m all for a trade.

Rozier’s rise has made this decision easier for the front office. I was PISSED when they drafted him in 2015. They drafted Marcus Smart the previous year, they already had Isaiah and Bradley, and everyone thought the team needed a big man. Ainge passed on Bobby Portis, Montrezl Harell, and Larry Nance jr. because he was intrigued by Rozier’s skill-set, and didn’t care he was joining a team loaded with guards. After barely playing as a rookie and getting limited minutes last season, Rozier has proven himself as an elite back-up guard, and he’s barely scratched the surface of his potential.

If the front office thinks they can keep Smart at a reasonable price, they won’t move him. Luckily, the market is on their side. Players have signed ridiculous contracts over the past three offseasons, but with the stabilized salary cap, guys who are hitting free agency this summer won’t see the same lucrative deals.

Smart is a huge wildcard. On the high end, he could make between $15-17 million, but if the market is weak, he’d be forced to settle for something around $8 million. If he doesn’t receive a satisfactory offer, he may just sign the qualifying offer, play another season with the Celtics, and test unrestricted free agency in 2019. Cap space is drying up, the restricted free-agent market hasn’t been friendly, and these factors could work to the Celtics favor.

Ultimately, if the Celtics are going for a championship this year and next year, Marcus Smart will help, and unless we get a blue-chipper in a trade, his absence will hurt our chances at a championship. Over the course of a game, Rozier can replace most of what Smart does, but in those key moments, nobody makes the “winning plays” like Smart. His injury will keep him sidelined until after the all-star break, and there’s a chance we’ll never see him again in a Celtics uniform. I wouldn’t want that to happen, but if it does, I understand the reasons why.