Cheer for Fleury tonight. Then Let It Go, Let It Go 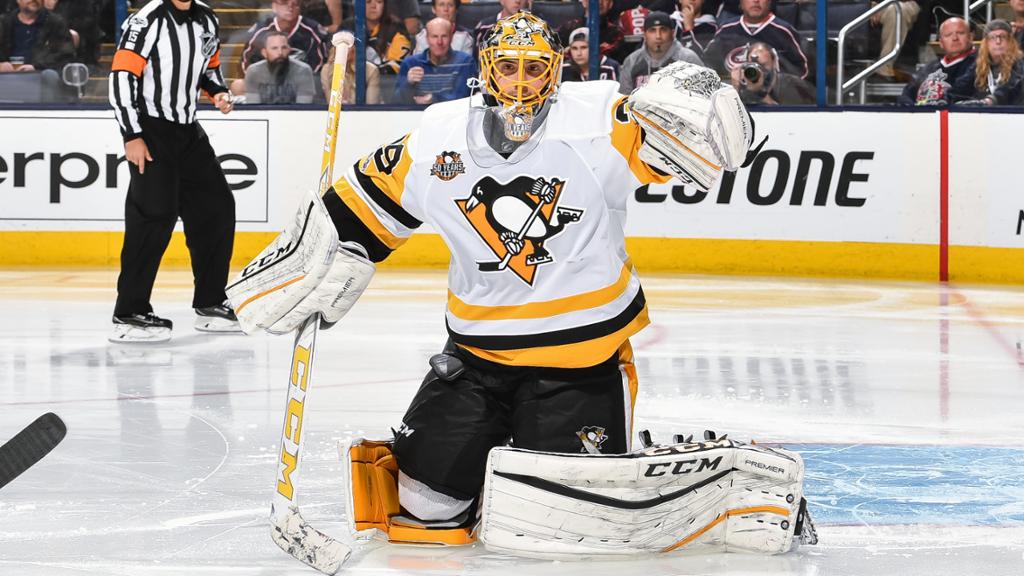 Cheer for Fleury tonight. Then Let It Go, Let It Go

You looked for the date as soon as the Penguins released the 2017-18 schedule last summer. When would the Vegas Golden Knights visit Pittsburgh? We all looked for that date for one reason only: the return of Marc-Andre Fleury.

The long relationship between the Penguins and Fleury ended impersonally last summer when he was drafted by Vegas, barely one week after cleaning out his locker at PPG Paints Arena for the last time. It was a hasty, bittersweet departure and the tears that flowed at the Stanley Cup parade weren’t really tears of joy, but tears of finality.

The 2016-17 season was tumultuous for Fleury. For the first time in his career, he was deemed expendable when the younger, lower-salaried and equally effective Matt Murray became the Penguins starting goalie. Fleury steadfastly remained the consummate teammate throughout the year. He waived his no-movement clause at the trade deadline, giving the front office certainty that they could protect Murray in the expansion draft and keep Fleury in a Penguins uniform for the playoff run. When Fleury was replaced for good by Murray in the third round, Fleury never stopped advising the ten-years-younger protégé who had supplanted him, never complaining about giving up the net he had defended so well in the first half of the playoffs, displaying the professionalism and class that endeared him to Pittsburgh for 14 years.

Pittsburgh: this is why you will stand up and cheer for him tonight. Not because of the countless important playoff saves he made. It was never about one singular on-ice moment with Marc-Andre Fleury. It wasn’t about the golden smile. It was always about his exemplary character.

Hardship always reveals a person’s true character. He never made excuses or blasted teammates for his sub-par performances in several disappointing playoff series. He took ownership and accountability of his poor play like a real man. During the countdown to the expansion draft, Fleury never caused any distractions for the team, but kept the focus on defending their title. When he raised the Cup in Nashville, he immediately handed it to an astonished Murray without hesitation. In the emotion of the moment, Fleury could have declared his desire to be a Penguin for life and put pressure on the front office, but he never did. It wouldn’t be in his nature to put himself first.

So cheer for Fleury tonight. In the arena, the pub or at home, make it a long, loud standing ovation befitting one of Pittsburgh’s most beloved athletes.

But after the applause, remember there is a game to be played against one of the league’s top teams. Yes, we celebrate Fleury’s career tonight and finally say a proper goodbye. But in the heat of battle, resist the urge to be that jagoff who cheers when Fleury stones a Penguin on a breakaway, but rains down jeers on Murray if he gives up a soft one to a Golden Knight then loudly complains that “Murray sucks; we should have never let Fleury go”.

Never forget that Murray clinched two straight Cups for Pittsburgh, punctuating the most recent one with back-to-back shutouts. Moreover, Pittsburgh was spoiled to have both of them – 1 and 1A – in net these past two springs. As hard as it is for some people to accept, it is actually possible to like both goaltenders. So don’t stupidly disparage Murray; never forget the personal tragedy that Murray has been playing through this season either.

Celebrate Fleury and the past, but don’t dwell on the past too long.

To put it another way, think back to the All-Star Skills Competition two Saturdays ago when everyone laughed at/with Fleury for using “Let It Go” from the animated movie “Frozen” as his Save Streak music. While many assumed he had it played as a nod to his two young daughters, maybe the Flower was sending us all a message to move on:

My power flurries through the air into the ground
My soul is spiraling in frozen fractals all around
And one thought crystallizes like an icy blast
I’m never going back, the past is in the past
Let it go, let it go…