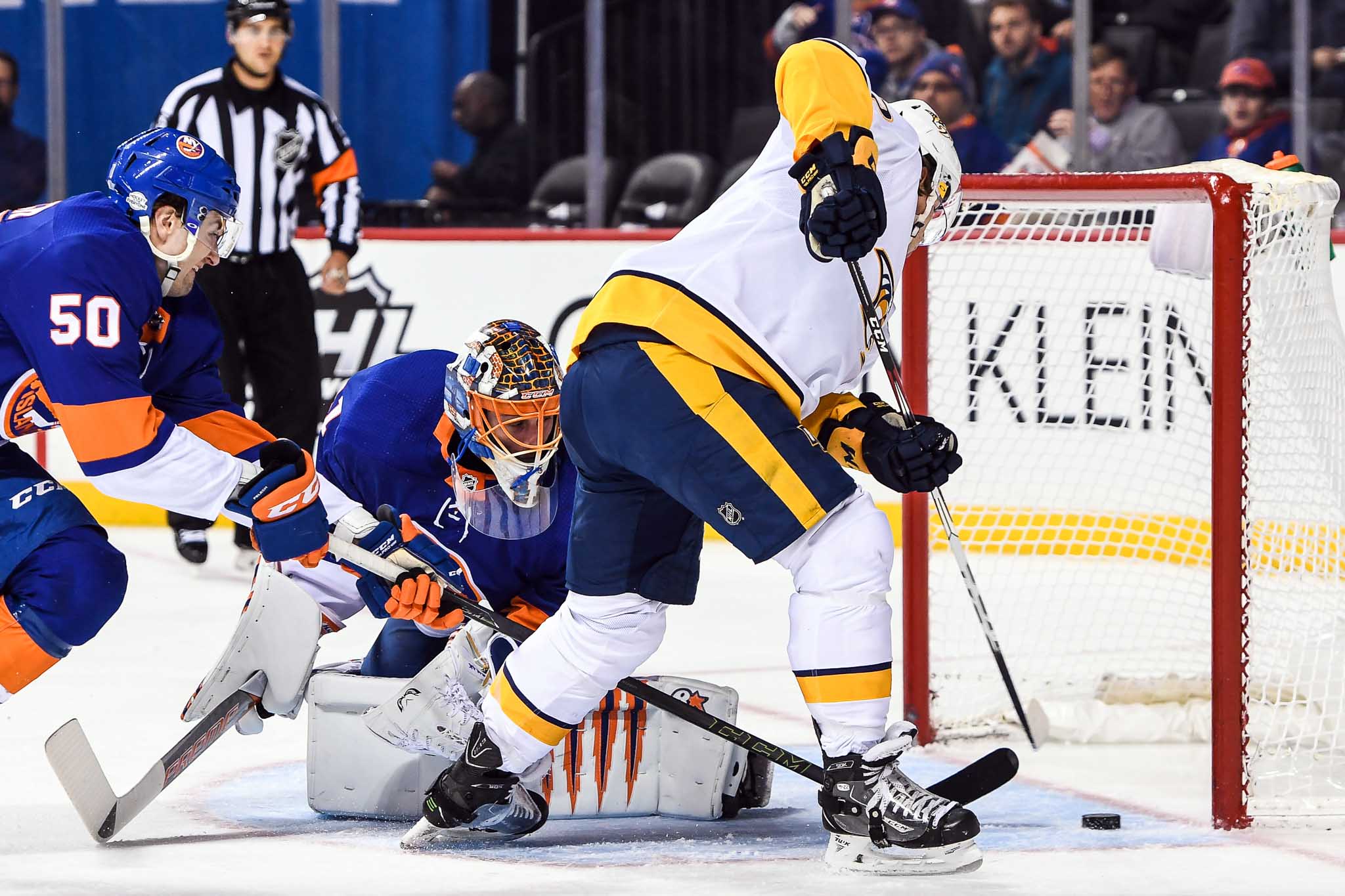 NEW YORK — For 59 minutes, it seemed as if the New York Islanders would escape Monday evening’s contest against the defending Western Conference champion Nashville Predators with a 4-3 victory. Jaroslav Halak did everything he had to do to give his team a chance but with an extra attacker on, Nashville’s Ryan Johansen found the top corner of the net, setting up Roman Josi for the game-winner in the overtime period.

What did we learn?

1. In a tight playoff race, the Islanders have managed to gain points in six of their last 10 contests. That is big for a team that couldn’t get out of its own way not too long ago. They’ve got a back-to-back coming up against a few Eastern Conference cellar-dwellers in the Buffalo Sabres and Detroit Red Wings. But, those teams cannot be underestimated. With that said, gain four points in those two games and like that, we can be talking about a top-three spot in the Metropolitan

2. Jaroslav Halak has looked so strong in net. That is huge news for the Islanders. Teams ride hot goalies down the stretch and in the postseason. If Halak continues his strong play, there is no reason why the Islanders can’t sneak into the playoffs. Speaking of the playoffs, New York (26-22-6) moved into the second wild card spot in the Eastern Conference, one point ahead of the Philadelphia Flyers. Although, I can’t imagine Flyers fans truly caring right now.

3. There is a problem, however. Halak has had to face 33 or more shots on goal in 17 straight starts in net. He has had to make over 40 saves six times. The Islanders, as a team, are giving up way too many chances. They’ve allowed at least 30 shots on goal in 20 consecutive games. That doesn’t typically bode well for goaltenders fighting to stay fresh down the stretch and a battered defense that is trying to stay healthy.

4. Speaking of healthy, no word yet on defenseman Scott Mayfield who did not return to Monday’s game due to a lower-body injury. The Islanders could use an injury to another defenseman like a hole in the head. Good news as Johnny Boychuk seems close to returning as he has been skating recently.

5. Pekka Rinne is good. He is really, really good. That’s what everyone thought as we watched overtime on Monday. He may have got off to a slow start between the pipes but boy did he calm down. The save he made on Barzal in overtime may be arguably one of the saves of the season across the NHL. Thomas Hickey set up Eberle who found Barzal for a pretty tic-tac-toe golden opportunity in front of the cage. But, Rinne stuck the glove out and snagged the rookie’s chance.

6. How does Alexi Emelin not have a suspension already? After Saturday’s near decapitation of New York Rangers’ defenseman Marc Staal and Monday night’s board on Jason Chimera, Emelin is doing everything the league has desired to get rid of the last few years. It sounds like a broken record but the league truly needs to crack down on these players who dangerously lay brutal hits from behind or causing contact between a player’s head and the boards. Unacceptable.

7. Want a positive? The chemistry between John Tavares, Josh Bailey and Anders Lee continues to thrive despite the most recent changes to the lineup. There was a reason why the trio was united for the bulk of the first half this season. Now, with Lee moving to Mat Barzal and Jordan Eberle’s line and Anthony Beauvillier slotting to Tavares’ and Bailey’s unit, time between the aforementioned trio is limited to the power play. With that said, Bailey’s cross-ice pass to Tavares was the perfect way for New York to start Monday night’s game – in style.

8. Something that stuck out on Monday night was a trait that the Islanders established earlier on this year – the ability to come back. New York didn’t get rattled when Nashville scored twice in a two-minute span in the first period. They battled back, showed resiliency and character and ultimately were rewarded towards the end of the opening period with two big goals.

9. It was a promising game for bottom-six forward Casey Czikas, who netted his second point in as many games and found twine for the first time since December 14 against the Columbus Blue Jackets. The issue with the Islanders this year, especially recently, was the lack of production from their bottom-six forwards. Brock Nelson scored the game-winner on Saturday and Czikas earned a huge point on Monday to give the Islanders an important lead going into the first intermission. Is it a sign of good things to come?

10. I thought Nick Leddy had a strong game on the blueline for the Islanders on Monday. Not only is it back-to-back games with goals for Leddy, he seems more confident with the puck, has completed several outlet passes and has clamped down defensively when needed most. Monday was a vintage Nick Leddy performance. He totaled 34 shifts and was on the ice for 29:49. This is a game after he scored on the power play, registered five shots on goal and had 24 shifts for 21 minutes.