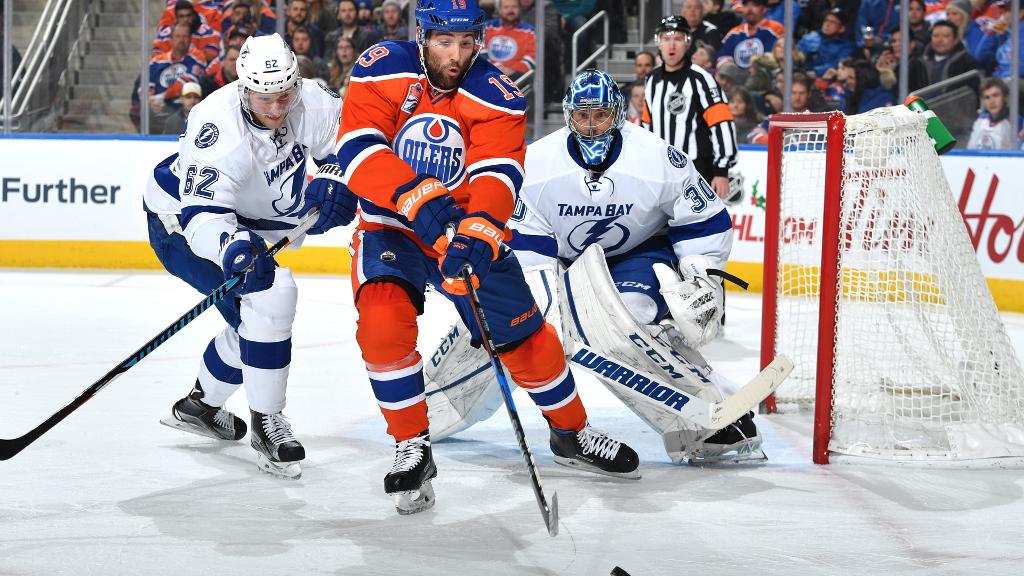 If you thought tonight would end with the Edmonton Oilers chasing Andrei Vasilevskiy and running the best team in the NHL out of Rogers Place, raise your hand. I, like most of you, did not see that happening. After last night’s tough Patriots loss, I was just hoping the Oilers would play well enough to keep my mind off of that. They did more than that.

Connor McDavid proved once more why he is the best hockey player in the world, Cam Talbot looked like his old self and Edmonton’s powerplay showed some serious life on this night. The Oilers were actually ready to go from the start, and credit where due they played a full 60 minutes en route to a pretty nice home victory. Edmonton finishes their five game home-stand at 3-1-1, collecting seven of a possible ten points. Not bad at all.

Edmonton’s 6-2 victory is their first of the month and sets them up with a little confidence as they take Cali later this week.

Connor McDavid was sensational, scoring four goals and adding an assist in the victory. The captain easily could have had five or six goals on this night, and was easily the best player on the ice, outshining Steven Stamkos and Nikita Kucherov with relative ease. This was another one of those nights where McDavid simply stole the show. Impressive doesn’t even tell the tale.

After missing last Thursday’s game with the flu, Cam Talbot bounced back quite nicely tonight and played a real strong game. That didn’t get enough talk, but it certainly didn’t go unnoticed to me. He was the Talbot of last year, and the Oil will need that down the stretch.

The powerplay scored for the first time since January 6th, converting on each of its first two chances on this night. The Oilers finished two-for-four on the man advantage and I thought looked dangerous every time. They were willing to shoot the puck right away and it made a difference.

The penalty kill gave up a goal again. That said, the unit wasn’t a complete tire fire tonight but still wasn’t good. Matt Benning’s tough season continues, as I thought he had another really tough game. When Adam Larsson returns to the lineup, I wouldn’t be shocked if Matt was the player that found his way to the press box.

Oscar Klefbom looked pretty bad on the first goal against, not getting the puck out of the zone and trying to do too much on the penalty kill. Kris Russell also looked lost on that tally against. Neither of them were particularly good at five-on-five tonight either.

Milan Lucic struggled with the puck on this night and was a total non-factor in the six goals scored. That’s a pretty bad sign for a top-six forward like Milan. He also wasn’t engaged physically like he had been on Thursday against Colorado.

Hey, look! I did a postgame and there wasn’t anything under the ugly section! This is a welcomed change!

That was arguably Edmonton’s best and most complete effort since they ran the Vegas Golden Knights out of Rogers Place back in November. As I said above, the Oilers were ready to go from the opening puck drop and they kept their foot on the gas for all sixty minutes. Connor McDavid did McDavid things, and the special teams showed some actual signs of life.

In a lost season, this was a bright night and a moment that the Oilers can build off of. They handled the best team in the NHL and are now one game back from fake .500. There is a chance to finish strong here, fix some issues and set yourself up for a strong year next year, just as these very same Lightning did a season ago.

Tonight was a good start, now let’s see it through the weekend and through California.

It’ll be a late one on Wednesday, as the Oilers visit the Staples Center in Los Angeles to battle the Kings. Edmonton is currently eleven points back of LA and has a game in hand, so a win on Wednesday could make things somewhat interesting for those of you that still believe this team has playoff hopes.

After that, the Oil will be in Anaheim on Friday and San Jose on Saturday.