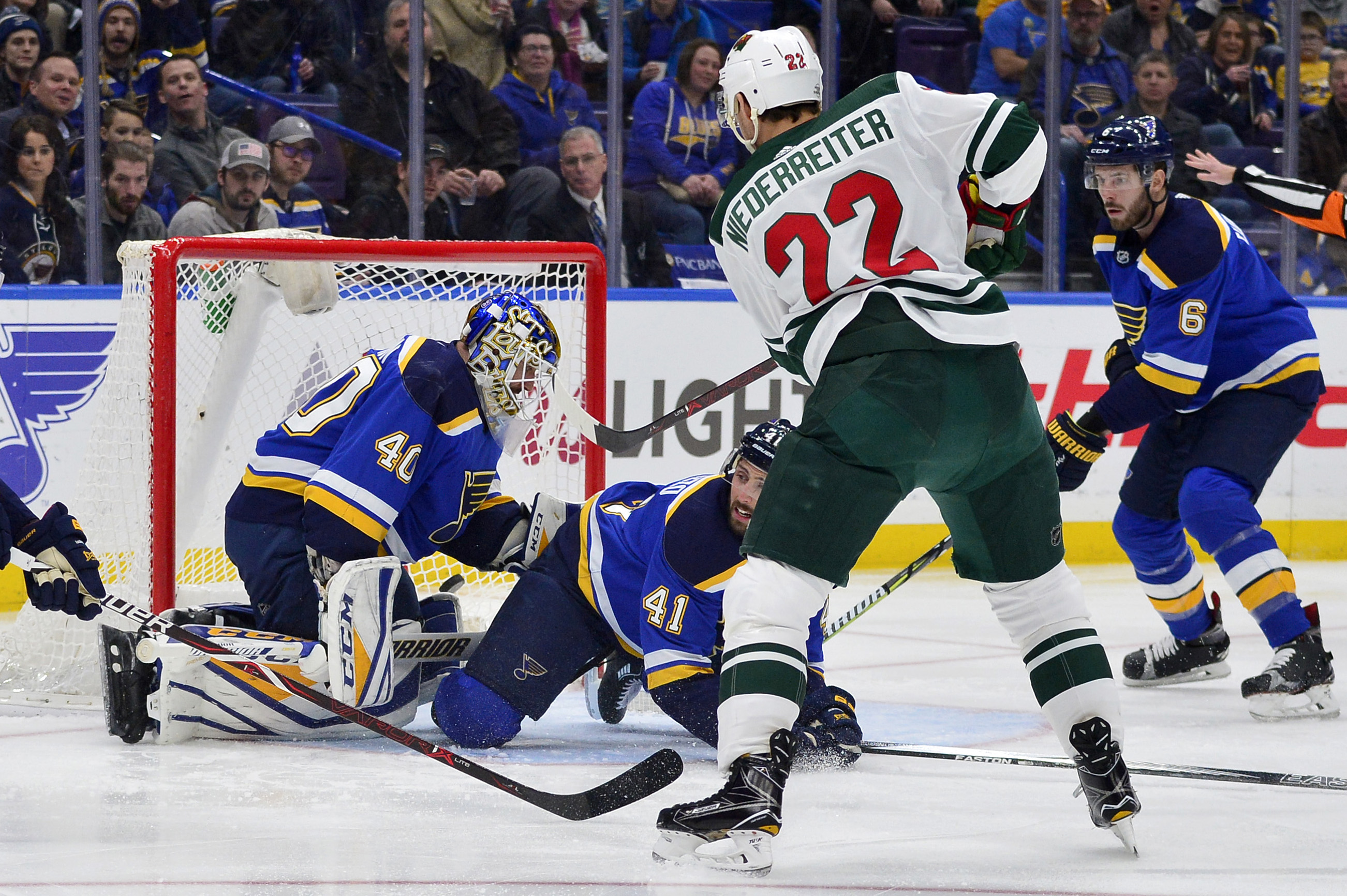 With the hype of the Super Bowl behind us the Philadelphia Eagles won (woopty doo), hopefully things can return to normal around the Twin Cities and the Minnesota Wild can concentrate on winning hockey games.  Or at least that’s what I’m hoping for after Minnesota’s latest embarrassment in a 6-1 loss to Dallas.  To use a quote from one of their players after the debacle, ‘we quit playing.’  Wild fans smirked that the Blues had a rough start January which brought out a lot of comments about the classic Mike Yeo swoon but they recovered and finished the month with 3 straight wins.

The Wild will have had a few days to rest up to play the Blues.  No doubt St. Louis will see how Dallas used their physical game to get Minnesota off its game so I think we’ll probably see the Blues try to employ a similar approach.  Will Minnesota recover and earn a big road win in St. Louis?

1st Period Thoughts:  The Blues would give Wild fans a feeling of dread just 45 seconds in as a shot from the point reached Devan Dubnyk who seemed to feel as though he had the puck trapped between his legs.  Only problem is, he didn’t have control and he would appear to inadvertently push the puck into the back of the goal.  1-0 Blues as Dubnyk protested what he felt was should’ve been a frozen puck.  Jaden Schwartz would get credit for the goal.  Minnesota would counter just a little over a minute later as Eric Staal carried a puck in and he’d drop a pass back to Gustav Olofsson who stepped into a shot that struck the crossbar and out and as Minnesota followed up the shot it was Nino Niederreiter sweeping up the loose biscuit and firing a shot by Carter Hutton tying the game at 1-1.  Minnesota used quick puck movement and little give and go plays to gain a little time and space in the offensive zone and they nearly took the lead as Tyler Ennis set up Staal near the Blues door step but Hutton was able to get across his crease for the save.  The Blues would have a golden opportunity just past the halfway point of the period as Schwartz set up Vladimir Tarasenko for a point-blank range chance that Dubnyk stonewalled.  Minnesota would take the lead late in the period as Daniel Winnik would chase down a puck in the corner of the Blues zone and he’d send a pass towards the crease where he was tapped in by Marcus Foligno before Hutton could pounce on it.  2-1 Wild to mostly stunned silence by the Scottrade Center crowd.  It wasn’t a pretty goal, but it was the kind of tally you get when you keep it simple and do the right things with the puck.  The Wild kept moving their feet and their effort would be rewarded as Kyle Brodziak held up Zach Parise giving Minnesota its first power play of the game.  Minnesota would take full advantage of the power play as Mikko Koivu made a nice power move into the middle of the ice and he’d unleash a backhander that beat a partially screened Hutton to give the Wild a 3-1 lead.  Minnesota would hold their two-goal lead going into the 1st intermission.  As the period ended, Alex Pietrangelo and Carl Gunnarsson would try to rough up Parise which drew a small scrum but no penalties would be called and I have little doubt we’ll see more of that as the game goes on.  Still, pretty nice response by the Wild after that early set back.

2nd Period Thoughts:  The Blues would swap out Carter Hutton for Jake Allen.  The pace of the game was slower, more calculated as neither club wanted to give up a critical chance so both teams were quick to retreat and defend the middle of the ice.  That meant both teams were forced to settle for shots from the perimeter.  The Wild seemed content to defend, but at times it appeared as though the Blues were being given a lot of extra time to ‘finish’ their checks.  The lenient allowance meant St. Louis was able to get away with what should’ve been interference penalties on nearly sojourn into the Blues end of the ice.  The Blues would come close to cutting into the Wild lead as a point shot by Pietrangelo was deflected by Dmitry Jaskin that rang off the cross bar and out.  Minnesota didn’t have many quality scoring chances, but they did have a few.  One of the best coming off the stick of Ennis that was gloved by Allen.  St. Louis would be gifted a power play on a pretty weak tripping call.  Minnesota’s penalty kill was terrific, working bodies and sticks into shooting lanes and the Wild never really let the Blues sustain any real pressure offensively.  The Wild would get the kill and then they would capitalize on tipped pass that Allen skated way out of his crease to play before Jason Zucker could reach the puck but Minnesota’s 2nd wave kept the puck in the zone and they’d work it back to Zucker and he’d move in and beat Allen on a wicked backhander top shelf.  4-1 Wild.  It was the kind of goal that really deflates an opponent and the sellout crowd was quiet and anxious.  The Blues just couldn’t get the lucky deflection they were looking for.  Brodziak would let go a shot from the point that was redirected well by Patrik Berglund that struck Dubnyk square in the goalie mask and stayed out.  Minnesota stayed patient and they’d add to their lead as Matt Dumba stepped into a slap shot that powered its way through the pads of Allen and in.  5-1 Wild.  Minnesota continued to defend well in the closing minutes; forcing the Blues to settle for shots from the perimeter and the Wild had to be feeling pretty confident in what was a patient and focused effort to this point.  It wasn’t just their effort in the defensive zone but the forecheck was putting on a clinic, as the outhustled and outskated the Blues.

3rd Period Thoughts:  Minnesota picked right up where it left off in the 2nd.  The Wild’s hustle was frustrating the Blues and after a big hit by Winnik on Ivan Barbashev, a scrum would ensue as Joel Edmundson went after Winnik and Foligno stepped in to defend his teammate.  Minnesota would end up with a power play after the smoke cleared and the Wild would again capitalize on the man advantage.  It was Eric Staal letting go a wrist shot that caromed off the inside of Colton Parayko‘s leg and by Allen.  6-1 Wild.  Minnesota would give up a power play which gave the Blues a chance to get back into the game, but Minnesota’s penalty kill again was rock solid.  They got bodies and sticks into passing lanes and the few times they didn’t, Dubnyk was there to slam the door shut and Minnesota would kill the penalty.  Dubnyk made some tremendous saves to keep the Blues at bey as they tried to make a game of it.  Scary moment towards the latter half of the period as Nate Prosser would block a shot with the inside of his leg that seemed to cause the area near his knee to buckle and he fell right to the ice in clear plain as Jaskin spun around and lifted a puck over Dubnyk’s shoulder.  6-2 Wild.  Prosser would make his way for the locker room with the assistance of the Wild training staff and it did not look good.  The injury to Prosser seemed to only embolden the Blues attack and they began to swarm in the Wild zone.  A tripping penalty gave St. Louis another prime opportunity to cut into the Wild league, and a blast from the point by Parayko was blocked by Dubnyk and pop up into the air where it was batted out of the air by Paul Stastny and bounced off the ice and in.  Or was it, as the officials waived off the goal immediately.  I must admit, the replay made it look like Stastny made contact with the puck underneath the crossbar but the officials did not overturn their initial call for the high stick on the play and the game would end with Minnesota enjoying a 6-2 victory.

Devan Dubnyk made a number of timely saves to never let the Blues crawl back into the game which was an impressive recovery after giving up a goal just 45 seconds into the game.  Dubnyk did a nice job controlling pucks near his crease that didn’t allow the Blues to claw their way back into the game despite outshooting Minnesota 19-1 in the 3rd period.  The penalty kill did give up one goal, but that was mostly due to the injury Nate Prosser sustained that didn’t allow him a chance to defend on Jaskin’s goal.  Prosser’s injury makes for an interesting roster situation since it has been his arrival that has stabilized the Wild’s blueline.  I thought Gustav Olofsson had one of his better games as a member of the Wild as he seemed confident and decisive at both ends of the ice.  Jared Spurgeon, Ryan Suter and Mathew Dumba were solid defensively as well.  Minnesota was backchecking well and consistently all game long.

Offensively the Wild not only had an answer for the Blues early goal, but they continued to work hard and they were rewarded with some goals.  I think the go ahead goal by Foligno was key momentum swing.  The goals were timely for Minnesota as they seemed to be at key moments where the Blues failed to capitalize which helped demoralize St. Louis in the process.  The line of Koivu, Zucker, Granlund all ended up with 2 points apiece.  The power play struck twice and Minnesota was taking what the Blues were giving them.  Minnesota kept moving the puck quickly and this never allowed the Blues to neutralize the Wild with its physical play.

This was a huge bounce back win for a club that needed to prove it could win a tough divisional game on the road.  While the Wild sat back a bit in the 3rd period, Minnesota outworked and outhustled St. Louis most of the game and that led to being rewarded offensively.  The quick answer by Niederreiter was a great sign of resilience for a team that needed to demonstrate it.  Nice win, and now the Wild return home to face the Coyotes.

C – Jordan Greenway (Boston U., H-East) ~ the junior helped lead the Terriers to a Beanpot championship in the annual contest for bragging rights among the Division I universities in the Boston area as Boston University prevailed 3-2 in double overtime over Harvard.  The former U.S. National Development Team star had an assist in the victory.  Greenway has 9 goals, 25 points, 42 PIM’s and is a +5 in 28 games.