10 NBA players likely to be moved before trade deadline 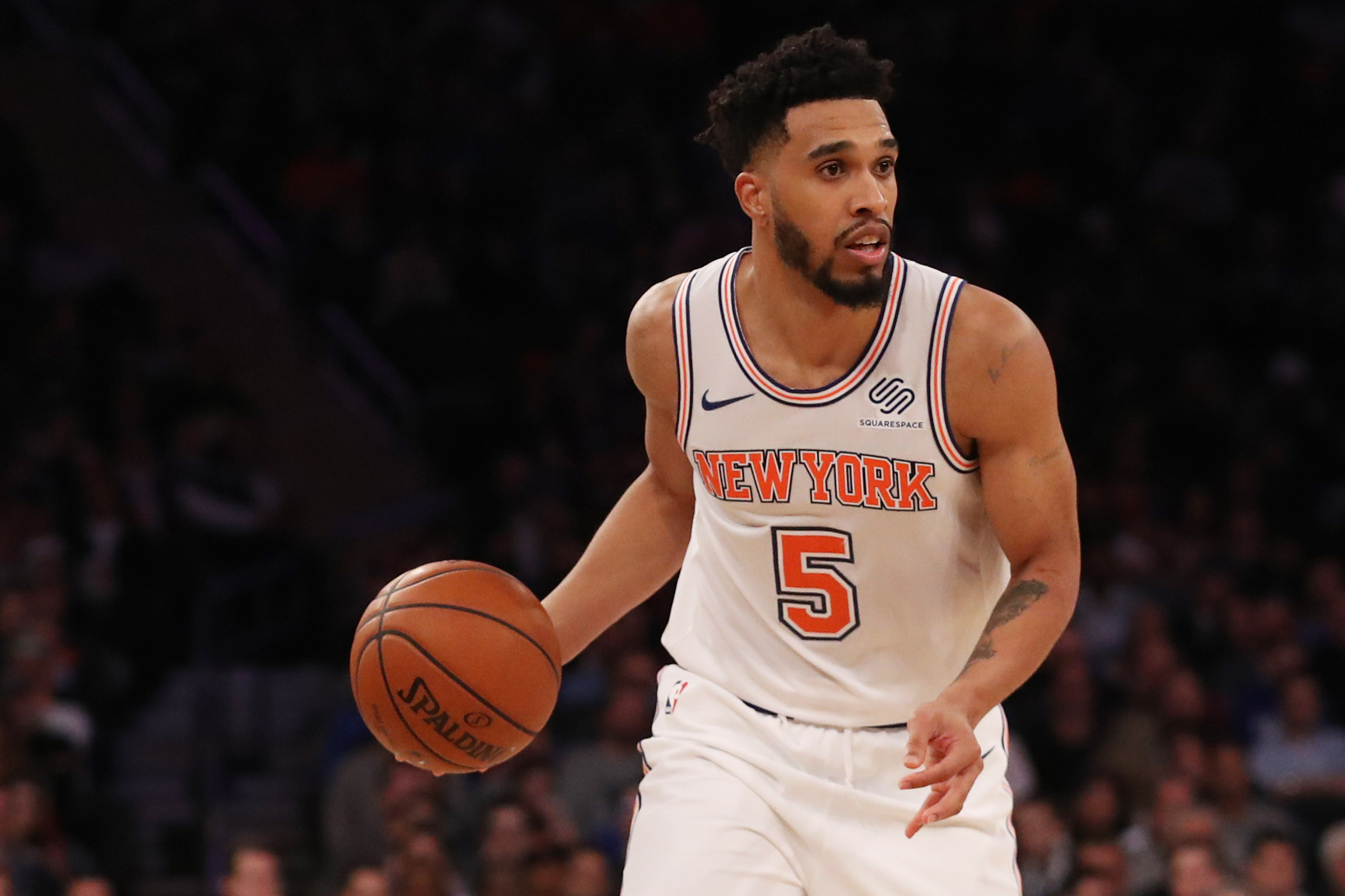 10 NBA players likely to be moved before trade deadline

As Thursday’s trade deadline fast approaches in the NBA, it’s time to take a look at the players most likely to be moved.

We’ve already seen one blockbuster trade go down in the form of Blake Griffin getting dealt to Detroit. Will we see another before 3 p.m. ET on Thursday?

Here are 10 players likely to be moved:

Averaging a rock-solid 19.5 points per game, Tyreke Evans is as good a bench scorer as they come in the NBA this season and an even better bargain. The 28-year-old is on a one-year, $3.29 million deal with the Memphis Grizzlies.

The Boston Celtics, Cleveland Cavaliers, Houston Rockets, Miami Heat, New Orleans Pelicans and Oklahoma City Thunder have all contacted the Grizzlies about Evans, and the Philadelphia 76ers are interested as well, a source confirmed to The Philadelphia Inquirer‘s Keith Pompey. The Grizzlies have set the asking price for Evans at a first-round pick, though.

After trading Blake Griffin to the Detroit Pistons last week, the Los Angeles Clippers will likely be moving on from the other half of “Lob City.” The Cleveland Cavaliers and Milwaukee Bucks are the favorites for DeAndre Jordan, but the Miami Heat, Portland Trail Blazers and Orlando Magic have made inquiries about the 29-year-old as well, sources tell Sporting News’ Mitch Lawrence.

Jordan’s points and blocks per game are down from a season ago when he made the All-Star team, but his rebounding prowess remains consistent. He currently ranks second with 14.9 per game, and has finished no worse than second in the league in each of the past four seasons.

Likely joining Blake Griffin and DeAndre Jordan as Clippers players to be moved this season is Lou Williams, who is currently tied for first in points per game off the bench with 22.0. The 31-year-old is playing arguably the best basketball of his career, and is a free agent after this season, making him the ideal rental player for contending teams.

The Toronto Raptors, Boston Celtics, Detroit Pistons and Miami Heat are all seen as teams Williams might end up on, according to the Sporting News’ Mitch Lawrence. Basically, any contending teams looking for a scorer off the bench should be talking to the Clippers about Williams. Just like with Jordan, Los Angeles is seeking packages of young players and picks for Williams, as ESPN’s Adrian Wojnarowski indicated in a tweet last week.

Given the recent season-ending injury to Kristaps Porzingis, it’s almost certain the New York Knicks will be sellers at the trade deadline. Courtney Lee is one name to watch for. The 32-year-old is averaging a career-high 13.3 points per game this season, and it’s possible he could fetch the Knicks a decent return in a trade market that is desperate for quality wing players. In fact, according to NBA executives that spoke to Marc Berman of the New York Post, the Knicks could get as much as a late first-round pick for Lee.

5. Willy Hernangomez or any other Knicks center

The New York Knicks have a logjam at the center position, and Willy Hernangomez isn’t happy about it. After he was named to the All-Rookie First Team a season ago, Hernangomez has played sparingly this season. The arrival of Enes Kanter in the Carmelo Anthony trade this past offseason has had a lot to do with that.

As Yahoo! Sports’ Shams Charania first reported, representatives for Hernangomez have requested that he be traded ahead of Thursday’s deadline, seeking a situation where he can play more and continue to develop. Several teams have expressed interest in the 23-year-old, sources told Charania. However, if the Knicks still see Hernangomez as part of their young core, they would need to move Kanter or Kyle O’Quinn, both of whom have drawn interest from opposing teams.

George Hill is still a Sacramento King for now, but it’s possible he’ll be a Cleveland Cavalier by Thursday’s deadline. According to Jason Jones of the Sacramento Bee, a deal that would have sent Hill to Cleveland for Channing Frye, Iman Shumpert and possibly Derrick Rose was “close to done” about two weeks ago but has yet to be completed.

Cleveland, coming off blowout losses to Houston and Orlando, has gone 5-10 since the start of the new year, and the feeling around the league is that the Cavaliers will make a deal happen to try and right the ship before it’s too late—whether it’s for Hill or another player.

7. Marco Belinelli, Ersan Ilyasova, or both

NBA executives told Yahoo! Sports’ Chris Mannix that the Atlanta Hawks have made everyone available ahead of Thursday’s deadline. But the two players most likely to be moved are Marco Belinelli and Ersan Ilyasova. Both have played well this season, averaging double figures in scoring for the Hawks, not to mention both are on affordable contracts that expire after this season.

On Tuesday, the New York Time‘s Marc Stein reported that Atlanta had informed Belinelli he was “on course to be traded” by Thursday’s deadline. Stein also noted that there continues to be “considerable trade interest” in Ilyasova.

8. Any Jazz player except for Donovan Mitchell, Rudy Gobert

The Utah Jazz hit a home run in the draft with Donovan Mitchell. The future looks bright for him and Rudy Gobert. Utah’s plan going forward should be to build around that duo, which would explain why practically every other player is available ahead of the deadline.

According to the Salt Lake Tribune‘s Tony Jones, Utah has been gauging the market for Rodney Hood, Derrick Favors and others. Hood, who was sent to the bench for Mitchell earlier in the season, is averaging a career-high 16.8 points per game. He seems like the most likely to join a new team before the deadline, but the front office may be persuaded to keep the roster as is if the Jazz maintain their current winning streak, which stands at six games prior to Wednesday’s matchup against Memphis.

It’s no secret that the Los Angeles Lakers are trying to shed salary for summer free agency, and they’ve made it clear that Jordan Clarkson, Julius Randle and Larry Nance Jr. are available, according to ESPN’s Adrian Wojnarowski. Clarkson will likely be shopped the hardest of the three, as he is owed $26 million beyond this season.

The Lakers aren’t interest in taking on any long-term contracts that might prevent them from signing big-name free agents this summer and the next, so expiring contracts and draft picks will certainly be on their minds when discussing deals for Clarkson, Randle and Nance.

The Orlando Magic will be open for business at the trade deadline. Even Aaron Gordon has reportedly been mentioned as a player the team might try to move. The only player off-limits is probably Jonathan Isaac, the sixth overall pick in this year’s draft. Aside from him, opposing teams can have their pick of the litter if the deal is right. Some players to keep an eye on are Nikola Vucevic, Elfrid Payton and Mario Hezonja.

Orlando has yet to find that one player to build around in recent years. Most would have assumed that Gordon was that player, but apparently not.