RECAP 55: Five Goals Chased With a Shot of Fleury 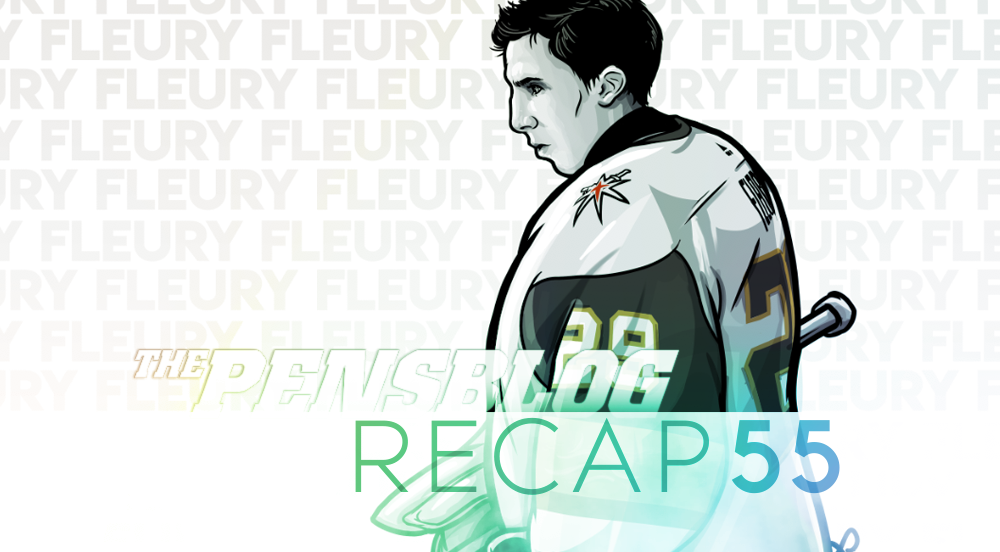 RECAP 55: Five Goals Chased With a Shot of Fleury

Let’s get the sappy shit over with early here, shall we?

For the first time since a 1-0 shutout win on May 15th, 2017, Marc-Andre Fleury was back starting a game at PPG Paints Arena.

It was wild.  It was emotional.

It was vintage Fleury.

Thank you for everything, Flower. pic.twitter.com/sXSFwmmUeP

The salute he got from the home fans was outstanding, but was only matched by the amount of teens sobbing over a professional athlete moving on to a different team.  This city will forever be indebted to MAF for everything he did both on and off the ice.  But it’s a business and thems the breaks.

From the opening puck drop, with emotions high, one would expect this game to have gone one of two ways: either Fleury was going to give up a goal on the first shot or he was going to be an impenetrable chastity belt on the goal.

After watching the first half of the game, it seemed to be that there was a resounding shutout clause written into the footnote of this game, particularly after Fleury robbed Crosby on a redirect on the doorstep on the first shot of the game.

Despite some tears after the tribute video, Flower remained dialed in, giving every Penguano the business every chance he could.  Waiting for Phil to skate by before he stared him down with the post rub.  The pokecheck on a Malkin breakaway a few minutes later to preserve what would at the time be a 2-0 lead.  Vintage.  Fleury.

But even with Trademark Fleury doing his thing, there was still a game that needed won for the Pens.  Five straight goals later, including 3 in a 7+ minute span in the 2nd and it was like 2012 Fleury was back, baby.

The timing couldn’t have been any better.

With that, the Pens got back in the win column after having Jersey snap their streak on Saturday, just 1 point clear of the Devils in 2nd place in the Metro, having played 3 more games.  They’re 4 points back of the Capitals, but have some breathing room now in the Wild Card race.

With Hornqvist and Sheary out week-to-week, Rust and Tommy Kuhn both got bumped up from 4L duties.  Bad time to be a RWer on Malkin’s line, though, as The Kuhn would get injured and not return at some point.  Murr vs. Goaltender #29 between the pipes.

Despite Crosby and Co. getting a few nice looks early on, Vegas would end up striking first just over 2 minute into the game, coming on the PP after Malkin got rung up for slashing Former Penguin Deryk Engelland.  The Pens PK ended up being its own worst enemy after a failed clearance that was held in nicely by Theodore at the point.  He’d go on to murder Carter Rowney with a bomb, effectively turning the 5v4 into a 5v3 as Rowney struggled to get to the bench.  Vegas immediately took the puck down low to compact the Pens PK and in a mad scramble, Reilly Smith and Jon Marchessault worked it to Will Karlsson all alone in the slot for the burial.

Until last night, Vegas was 22-1 when scoring first.

After trading off PP chances on either side of the first intermission, VGK would double their lead in the first half of the 2nd period.  Again, it came from the Pengiuns not being able to get the puck out against the dogged Former Penguin David Perron and Former Penguin James Neal.  With Perron slipping the puck to Nate Schmidt at the point, Malkin got a block in and looked like he was going to be off to the races.  Schmidt got a little puck luck and drove down the wing and trying to force a pass towards Former Penguin James Neal or Erik Haula in front, but only found Hags in a great defensive position.  Unfortunately for all involved, Hagelin only blocked the pass enough for Former Penguin James Neal to locate it before Dumo or Hags could and deposit it home behind Money.

About a minute later, the Pens would fail to convert on their second PP of the game as Nate Schmidt threw the puck over the glass for the first of two times on the night.  But a minute after the penalty expired, the Penguins would get an unlikely hero to break the goose egg and open the floodgates.

First, the credit goes entirely to Riley Sheahan’s back check on Mike Hunt to Patric Hornqvist him into coughing up the puck as Reaves jumped in down the wall looking to exterminate.  Sheahan proceeded to make a deft little backhand feed to Reaves to walk in on his off wing and fling a shot that had eyes to beat Goaltender #29, who really should’ve stopped it.  Ya know, for old time’s sake.

The Reeve’s goal would end up being the turning point.  The Pens really work up and took complete control of the game.  Vegas didn’t have even a single answer and 6 minutes later, it was a tied ball game.

All about that transition game as Simon-Crosby-Rust came hard at Vegas on a 3v3.  Unreal patience from Rust coupled with Crosby driving to the net to take Haula out of the equation opened up enough ice to land a 747.  Cole joined in, found that space, taking the pass and the permission to snipe for his second goal in as many games against Goaltender #29.

That Crosby-Rust tandem needed just over a minute to breathe before getting back out and dropping another goal on the Golden Knights.  Crosby went to work in his kitchen behind the net as chaos began to take shape in front.  Bit of a broken play as he fed Dumo jumping into the low slot, but eventually 87 would chip it out to Bake at the top of the circle to absolutely hammer one through the mass of bodies and into the twine.

This relentless ass team wasn’t finished finishing off Vegas.  Early in the third, Hagelin-Malkin-Phil were stuck in their own zone, but were caught in the perfect storm as a Vegas d-man went for a change.  As that happened, it allowed Malkin and Hags to double team Bellemare with the Pens having an extra player in the D zone, forcing him to make a lazy pass towards Theodore all alone at the point.  Phil! read the shit out of it and was off on a 2v1 with 71 against Former Penguin Deryk Engelland.  Even with Former Penguin Deryk Engelland going full swimmer, Gene was never giving that puck back to Phil!.  He was scoring on Goaltender #29 and that was that.  Bang.

Love how big of a dickhead Gene is after it too.  Stares down and points at Goaltender #29.  Humanity doesn’t deserve such a pure soul.

That smile is everything.

But before Ryan Mill could even announce the goal, Vegas would cut it the lead back down to two.  Again, it would come from the Penguins giving it to them.  Murray and Dumoulin handled the dump in, but as Dumo hit Sheahan looking to skate it out, Bellemare stepped up on him and caused him to just piss the puck away for Tuch to turn and fire one at Murr.  He made the initial save, but just kicked the rebound to Carpenter as he beat Dumo to the net.

It just planted enough of a short-live seed of doubt and opened the door for the Golden Knights to cut it to one with just under 8 to play.  Letang, without much support, looked to skate it out from deep in his own zone.  Got caught in his feet enough for Smith to steal it and stop it along the boards to where Marchessault could get in unimpeded and get a sharp angle shot away.  NSFW goal.

Vegas played with an empty net for the last 90ish seconds of the game as the Penguins held them off from equalizing.  Rust found nothing but pipe for the gimme goal and that was that.

Pens embark on a mini 2 game road trip as they had to Dallas Friday night before traveling to St. Louis for a Sunday matinee matchup.  LGP.