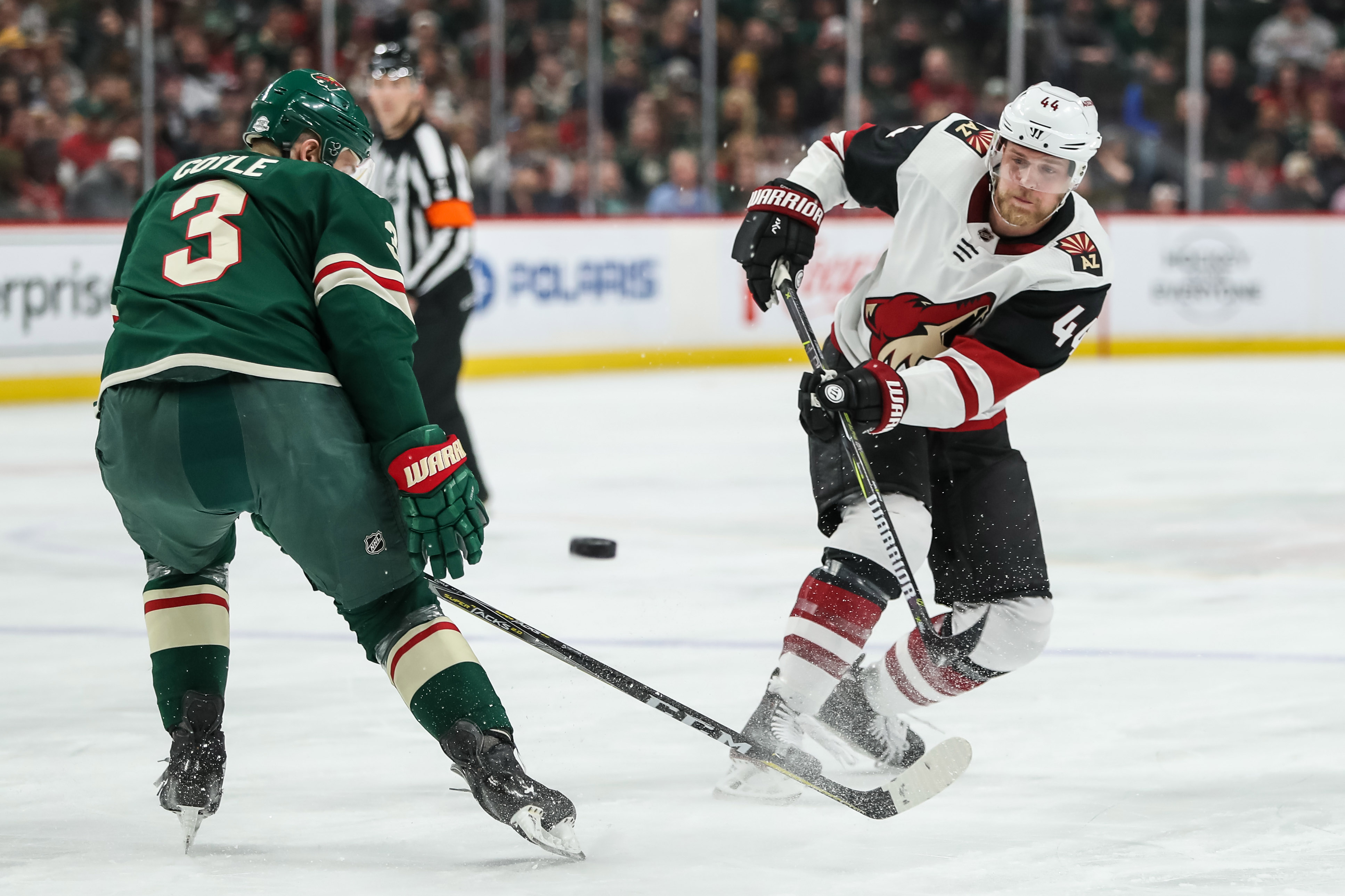 “Its a trap!”  This classic line from Star Wars: Return of the Jedi is certainly going to connect with any nerdy friends or co-workers you may have, especially if you deliver it dramatically just like Admiral Ackbar did in the film.  Just as the Rebel Alliance fleet found itself in range of a fully operational Death Star, they knew they were in trouble.  In a way, tonight’s game between the Minnesota Wild and Arizona Coyotes is your classic ‘trap game’ scenario.

The Coyotes are one of the NHL’s worst teams, well out of any remotely realistic scenario for making the playoffs.  The Wild are scratching and clawing just to hold onto the final wildcard spot in the Western Conference.  Every point matters.  With a showdown against division rival Chicago on Saturday looming, will the Wild get caught overlooking the desert dogs?

1st Period Thoughts:  The period did not start out well for the Minnesota Wild.  Minnesota was not skating with much jump and the Arizona Coyotes were able to dictate the pace of play throughout most of the 1st half of the period.  The Coyotes were able to set up shots from the point for Kevin Connauton, Alex Goligoski and Oliver Ekman-Larsson that were reaching Devan Dubnyk and Minnesota couldn’t seem to work the puck much beyond the red line.  The Coyotes were doing a good job of depriving the Wild of time and space and this led to a series of turnovers and also meant Minnesota was getting little to no pressure on Antti Raanta.  Even with the power play, the Wild did almost nothing with it due to poorly executed passes.  After the failed power play the Wild finally seemed to bear down and the ice started to tilt into the Arizona end.  It started out with a shift by the 2nd line of Nino Niederreiter, Eric Staal and Tyler Ennis.  Ennis set up Niederreiter for a quick shot that was absorbed by Raanta.  Minnesota started to pinch more with its defense and the Wild seemed to be getting closer to finally breaking the stalemate.  Staal would find Niederreiter for a nice little pass that put him behind the Coyotes’ defense and he’d move in where he made a nice backhand to forehand move only to be stonewalled by an outstanding toe save by Raanta.  Minnesota would gather up the loose puck as Ennis moved from behind the goal and feed a pass out front to Jared Spurgeon who made a pass over to Staal who went upstairs over the sprawling Raanta to give the Wild 1-0 lead.  It was a pretty finish after an amazing initial stop by Raanta.  The Wild had to feel a little relieved to have a 1-0 lead after such an ugly start.

2nd Period Thoughts:  The 2nd period was a little better than the 1st, but not by much.  Minnesota had moments where they forced some turnovers and quickly transitioned into offense.  The Wild would strike early as Matt Dumba found Matt Cullen with a long pass that sprung the 41-year old for a breakaway and the former Moorhead star made a pretty little deke and beat Raanta with a backhander.  2-0 Wild.  As nice as that pass was, Minnesota was careless with the puck and turning it over way too often.  In fact it would be kind to call the Wild’s play sloppy.  I think negligent was more accurate as Minnesota seemed to just want to hold onto its lead and the Coyotes started to push back a bit.  Dubnyk found himself a bit more busy in his end because of it.  Fortunately the Coyotes were missing the net when their shots were not finding Dubnyk and Minnesota would cushion their lead mid-way through the period.  Minnesota would add to its lead as Cullen dished a puck back to a trailing Mike Reilly who got off a quick shot that was partially deflected by Niklas Hjalmarsson and by Raanta.  3-0 Wild.  The goal seemed to give the Wild reason to relax and again go back to sloppy, careless passes and the ice would again tilt in the Minnesota end.  It was only inevitable that the turnovers were going to result in a goal for Arizona and they’d cut the Wild lead to two, as Alex Goligoski found Nick Cousins on a pretty back door pass for an easy snipe.  3-1 Wild.  Minnesota would work a little harder but for the most part was content to simply hold its 2-goal lead going into the 3rd.  I can’t imagine the Wild coaching staff will be too happy with that period.

3rd Period Thoughts:  Instead of specific analysis how about a little home experiment instead?  Put a large garbage can over your head and shoulders if you can get them in there.  Then have your kids or your wife grab a baseball bat and hit the garbage can as hard as they can.  What possibly could go wrong?  That sums up the Wild’s effort in the 3rd, or the stupidity of it all of just sitting back and playing rope-a-dope style the entire period and inviting a Coyotes’ comeback.  The Coyotes kept plugging away while Minnesota looked as though they were a man short the whole time as the Wild stopped skating and they began to get caught on long shifts which meant they moved even less.  It was maddening to watch and I don’t think anyone in the arena was the least bit surprised that Arizona tied the game sending it to overtime.

Overtime Thoughts:  Overtime was a microcosm of the game.  At times promising but not enough and let the Coyotes hang around and they get the overtime winner with just over a minute left.  Minnesota had a golden opportunity with a 2-on-1 between Parise and Staal and Parise decided to take the shot as Raanta makes a big save and even as Ryan Suter follows it up but the puck flutters up and over the goal.  The Coyotes counter attack, the Wild caught a bit in a long shift and Minnesota made a few small miscues with the puck that cause them to surrender possession and Clayton Keller fires a laser from the high slot that beat Dubnyk, 4-3 Arizona wins.

No sense really trying to break anything down too specifically.  This team tried to coast with a 3-0 lead and it cost them dearly.  Minnesota got some favorable results in the other games going on across the Central Division, and the Wild threw away a point.  Arizona skated hard and denied time and space but Minnesota wasn’t moving its feet too well; especially in the 3rd period when the Wild were mostly in a fetal position inviting the Coyotes rally.  This is an unforgivable loss to a club that is arguably the worst in the league.  Minnesota gave up 40 shots to one of the most offensively anemic teams in the league.

After the game, Wild fans were treated with the same lame excuses from the players like “stopped working,” and other empty pledges like “that can’t happen.”  The problem is, it has happened all too often and we are sick of the rationalizing.  This team threw a 3-0 lead away to a sad sack, last place team.  Pathetic doesn’t come even close to describing the result of this game.

Hockey can be a sport of illusions at times, where the game doesn’t turn out the way you expected it despite a lot of promising scoring chances.  That is how it started out in San Diego as the Wild were applying all kinds of pressure early against the Gulls but couldn’t manage to get a goal behind Kevin Boyle.  San Diego would strike twice in the span of a little over a minute as former St. Cloud State star Calle Kossila and Joe Blandisi found the back of the net behind Niklas Svedberg mid-way through the 1st.  Iowa would answer back late in the period as Zack Mitchell found the twine behind Boyle to cut the Gulls lead to one going into the 1st intermission.  The 2nd period was a chess match with the Gulls carrying most of the attack but Svedberg and Boyle were solid and the game was still knotted at 2-1 going into the 3rd.  Then the wheels fell off as the Gulls struck 3 times on goals from Jaycob Megna, Giovanni Fiore and Steven Olesky provided the coup de grace late in the 3rd to seal a 5-1 victory.  Svedberg had 24 saves in the loss.   Iowa returns to Des Moines to play Chicago on Friday.