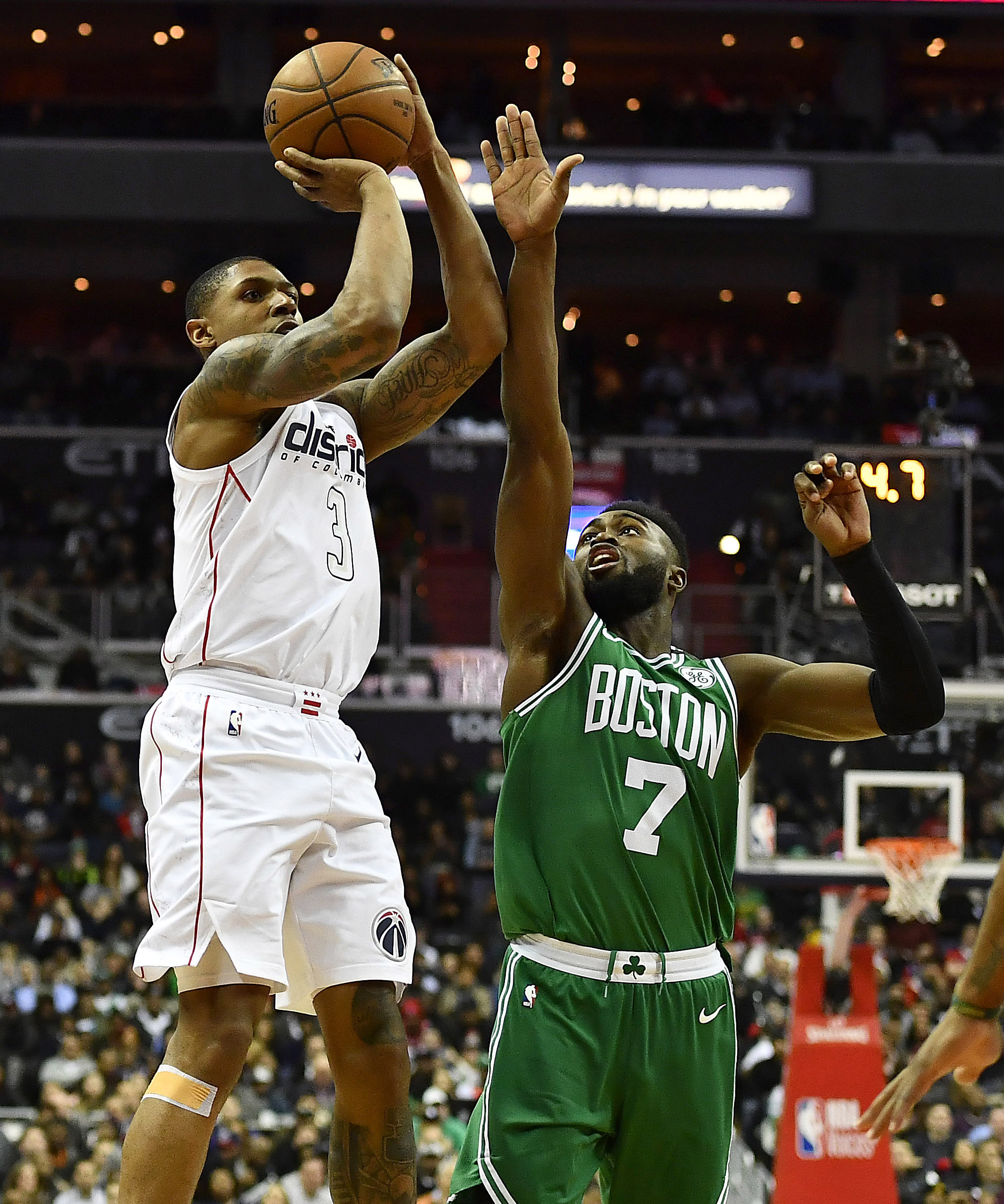 Well, Greg Monroe’s debut for Boston went about as well as one could hope. He finished with 5 points and 6 rebounds in limited game action, but also showed off his passing ability (2 assists) and quick hands on the defensive end (2 steals); all of which will pay huge dividends come the Playoffs.

Jaylen Brown and Kyrie Irving delivered in the clutch to give the Celtics the overtime win down in DC tonight. This was Boston’s 5th win in their last 6 games. Final Score: 110-104.

Al Horford, Terry Rozier, and Kyrie Irving shined brightest during the first quarter for the Celtics. Al began the game aggressively, taking the ball to the rim and getting fouled, getting his hand in to jar the ball loose from Gortat, and remaining physical in the post against the other Morris. Kyrie knew his minutes would be limited to about 30 minutes in order to get him some rest (he wound up playing 33 mins with OT included), so he came out looking for his shot early. One particularly pretty take to the rim ended with a sudden stop and pull back jumper in the lane right in Otto Porter Jr.’s eye.

Terry Rozier has been a force over the past 4 games, averaging 19 points, 7 rebounds, and 5 assists on 54% shooting from deep in that span. He got the ball rolling early tonight with a beautiful up and under followed by a make from downtown. Boston had no answer for Otto Porter Jr. (9pts) or Bradley Beal (8pts), though, and were trailing by a point after the first quarter, 27-26.

Greg Monroe got some early minutes in the first but was unable to connect on the offensive end until the 2nd quarter. His first make came (where else?) on the block in the low-post, as he used the spin-move to leave his defender in the dust and converted the 2 plus the foul.

Monroe was busting his ass out there for loose balls and making all of the right decisions defensively, which is all you can ask for from a guy who signed with the team today and has yet to practice. After playing coy during the pregame regarding whether Monroe would play at all, Coach Stevens played him for 11 straight minutes in the first half.

Other Q2 highlights included Theis’ offensive work (7 quick points and an OREB) and the defensive rotations looking solid all around. Boston’s D even managed to force a couple of :24 second violations in the first half.

(Sidebar: Chris Webber is the WORST for a lot of reasons – but he really outdid himself tonight by referring to “Coach Stevenson” on multiple occassions).

The game remained tight through two quarters, as neither team stretched their lead past 5 points; but the Celtics went to the lockerroom with the lead, 51-49.

Kyrie ensured the Celtics came out swinging in the 2nd half by drilling a quick 3 then lobbing an alley-oop for Baynes. Marcus Morris continued to struggle to find his shot and had an especially ugly possession in which he shot the ball, missed the rim, got his rebound, and dribbled himself into the corner before heaving a prayer as the :24 second buzzer sounded – he never even looked to pass. From here on out we’re just going to call these possessions a Mook.

The exact opposite of a Mook? The Average Al. Your big man exploded for 9 points in the quarter, matching Kyrie’s output, all while stifling the Wizards offensive game. Washington shot just 7 of 21 from the field during Q3 and found themselves trailing by a score of 75-70 heading into the fourth.

Greg Monroe continued to impress late into the game, scooping up offensive rebounds and showing off his passing skills that we’ve heard so much about. At one point he ran a beautiful give and go that resulted in Rozier getting to the line – a great demonstration of court vision on Monroe’s part. Stevens leaned on his big guys often in this game, opting for a lineup of Morris, Theis, Monroe, Tatum, and Rozier for much of the fourth quarter. The Celtics went on a 13-3 run during Q4 and stretched their lead to a game-high 10 points thanks in large part to Marcus Morris, who exploded for 11 points in what was supposed to be the final frame.

The Wiz are a determined bunch, though, so give them credit. They scratched and clawed their way back in a HURRY by grabbing offensive rebounds (17OREB compared to Boston’s 8 for the night) and hitting their 3’s (54% from deep through regulation, but they’d drop to 46% by the end of OT). Otto Porter Jr. continued to eat and seemed unstoppable at times during the game. He finished with 27 points on 9 of 16 shooting from the field to go along with his 10 rebounds and almost single-handedly won Washington the game.

When the Wizards went up 3 with just over :20 seconds remaining, it seemed as though the Celtics had let this W slip away. Boston then answered with a Kyrie drive to the hoop for a quick 2, forced a miss on the other end to get the ball back with about 10 seconds to go, and gave the ball back to Kyrie once more with the game on the line. He knew exactly what to do in this situation.

Kyrie used the screen set for him to create a mismatch with Markief Morris. When he rose for the game-tying 3, Morris proceeded to foul him on the arm and the ref blew his whistle. Kyrie went to the line and sank all 3 to send the game into overtime tied at 98.

It was officially Mr. Irving’s game from here on out. He called for the same play – used a screen to switch to Morris then was fouled shooting from deep only to make all of his free throws, again – and went on to score 8 straight points for the Celtics in the OT. A clutch corner 3 from Jaylen Brown all but sealed the deal for Boston, as the Wiz then shot brick after brick from deep in a desperate attempt to salvage a win in the final minute. The Celtics ultimately hung on and won by a score of 110-104.

Horford cleaning up the glass on the fast break.

HORFORD THROWS IT DOWN 🔨🔨 pic.twitter.com/NS4u2X2GFC

Jaylen and the Celtics official twitter doing their part to remind the NBA of his leaping abilities.

.@NBAAllStar you guys sure you don't want this in the dunk contest? pic.twitter.com/SRPhol9SNi

Jaylen essentially putting a dagger in the Wizards hearts.