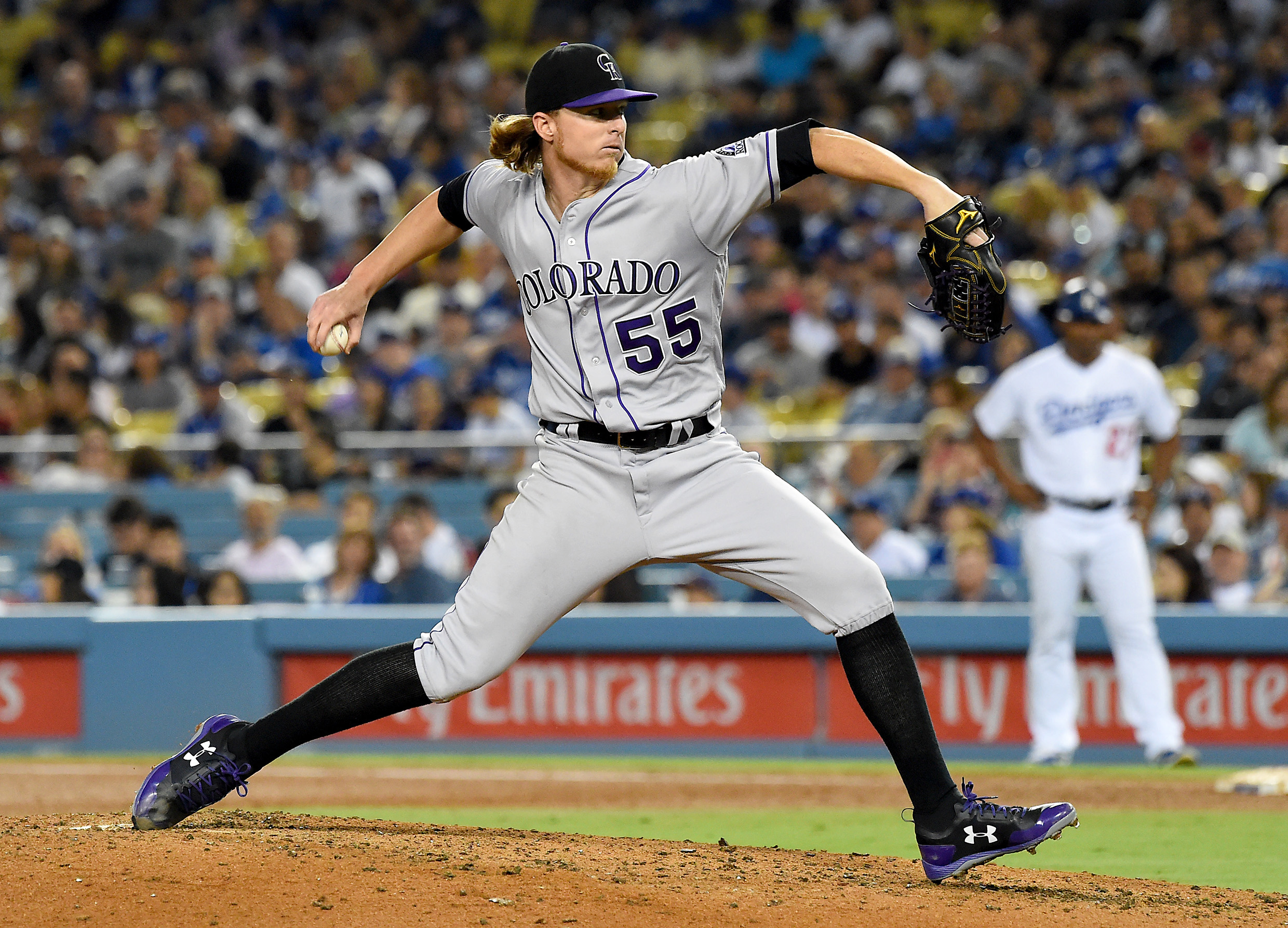 It seems like the same cast of characters are among the favorites to win the Cy Young award in their respective leagues every year. However, it’s hard to argue since all the pitchers that make up this group are pretty nasty.

Guys like Clayton Kershaw, Max Scherzer, Corey Kluber, and Chris Sale (among others) should be some of the favorites on a yearly basis because they consistently put up numbers worthy of such recognition. That doesn’t mean others can’t come out of nowhere to potentially snatch these honors, though.

If things fall into place, the following six hurlers could do just that in 2018.

I mentioned Gray as a potential National League Cy Young finalist not too long ago, so you had to know this was coming.

While the young right-hander was limited to just 110.1 innings this past year, he continued an encouraging trend. Check out how certain statistics have progressed throughout his first three big league seasons.

Gray’s strikeout numbers plateaued somewhat — his 8.8% swinging-strike rate in 2017 was a career low — but his contact numbers have consistently improved. Coors Field is normally the biggest problem for any Rockies pitcher, but he’s actually been better at home than on the road in each of the last two seasons.

Outside of seeing his first-pitch strike percentage climb almost four percentage points, the increased usage of his curveball is noteworthy. After throwing it 21.6% of the time as a rookie, he upped it to 30.0% last year. It was also his most effective pitch — out of his three most-used pitches (four-seamer, curveball, and sinker) that curveball had the highest strikeout rate (34.4%), swinging-strike rate (13.5%), and chase rate (37.7%), along with being tied with his four-seamer for the lowest wRC+ from opposing hitters (63).

He did struggle a bit in the second half, but the results weren’t drastically different from the first half. Plus, he threw a career-high number of innings and dealt with being in the thick of a playoff race. It shouldn’t have been surprising to hear him say he was fatigued once September rolled around.

With a full year in the majors under his belt, he’s ready to take another step forward.

How good was Aaron Nola in 2017? Of the top 15 starting pitchers (according to fWAR) to qualify for the ERA title, only six failed to throw 200 innings. Nola’s 168 innings were the lowest of this smaller group, yet his 4.3 fWAR gained him access to this area of the leaderboard.

Similar to Berrios, Nola has gotten some incredible results from his curveball — when looking at FanGraphs’ pitch values, only Corey Kluber‘s was better overall, while only Kluber and Carlos Martinez had better results on a per-100-pitch basis. The increasing effectiveness of his changeup is notable, though. Check out how his usage and results of that pitch have changed over the past three seasons.

His curveball will likely always be king, but supplementing that offering with another effective secondary pitch can help him continue progressing on the hill.

Including Gerrit Cole here would’ve been preposterous a few years ago. After all, this is a guy that posted a 5.5 fWAR with 19 wins and a 2.60 ERA back in 2015, netting him an All-Star appearance and a fourth-place finish in NL Cy Young voting.

He just hasn’t come close to replicating that performance.

Cole did rebound a bit last year with a 3.1-fWAR performance, but his hard-hit rate allowed (31.3%), ERA (4.26), and homers allowed per nine innings (1.37) got worse for the third consecutive season. With the Pittsburgh Pirates, he was expected to be the leader of their rotation, which is asking a lot of a young hurler. That pressure is off him now that he’s in Houston, and it could make a huge difference.

Roster Resource has him slotted into the third spot of Houston’s rotation behind two former Cy Young winners in Justin Verlander and Dallas Keuchel. He doesn’t have to be “the man” anymore, and with that pressure alleviated, he can focus on just pitching.

Let’s also not forget that he’ll have a much better team behind him, including baseball’s best offense from last season. So, it wouldn’t be shocking to see the wins start piling up again (wins aren’t a good stat, but they matter for Cy Young races), giving Cole a chance to reach that ceiling he showed us not too long ago.

Most of those overall numbers got worse in 2017, but that can be attributed to a rough start — he had a 5.60 ERA through his first 64.1 innings, although a 4.35 SIERA during that time tells us he ran into a little tough luck. He accumulated those numbers through the end of May, but from June 1st to the end of the season (124.1 innings), he posted a 3.40 ERA that was supported by a 3.49 SIERA.

The one difference for Quintana in a positive direction was his strikeout rate. After never posting one higher than 21.6% in a single season, he ramped it up to 26.2% in 2017. And if we look at his performance before and after getting traded, that number climbed up to 28.3% during his 84.1 innings with the Cubs.

This rise in punchouts could look suspect because his 8.4% swinging-strike rate is basically the same as his 8.5% career mark, but a clear shift in his pitch mix may have been a reason behind it all. If Quintana can keep the whiffs coming and enjoy the fruits of being on a team that should be sound defensively and offensively, he could make some noise in what’ll be his first full year in the National League.

After going 14-10 with a 3.45 ERA and 3.1 fWAR in 185 innings during the 2015 season, it seemed like Danny Salazar was about be in the American League Cy Young conversation on a yearly basis for the Indians.

It was hard not to be convinced of that following his first-half performance in 2016, too — he was an early front-runner for the award thanks to a 10-3 record and 2.75 ERA that led to an All-Star game appearance. The second half wasn’t very kind to him, though, as the right-hander was only on the hill for 32.2 innings and limped to a 7.44 ERA.

It’d be awesome to see him take the mound every fifth day to find out exactly what he’s capable of over 150 or 200 innings. Salazar has struggled with his control the past two seasons, but his strikeout rate has steadily increased (25.8% in ’15, 27.6% in ’16, 33.0% in ’17). He’s shown the ability to have a Kluber-like run of dominance over a short period of time, now it’s just a matter of staying healthy and putting it all together for a longer stretch.