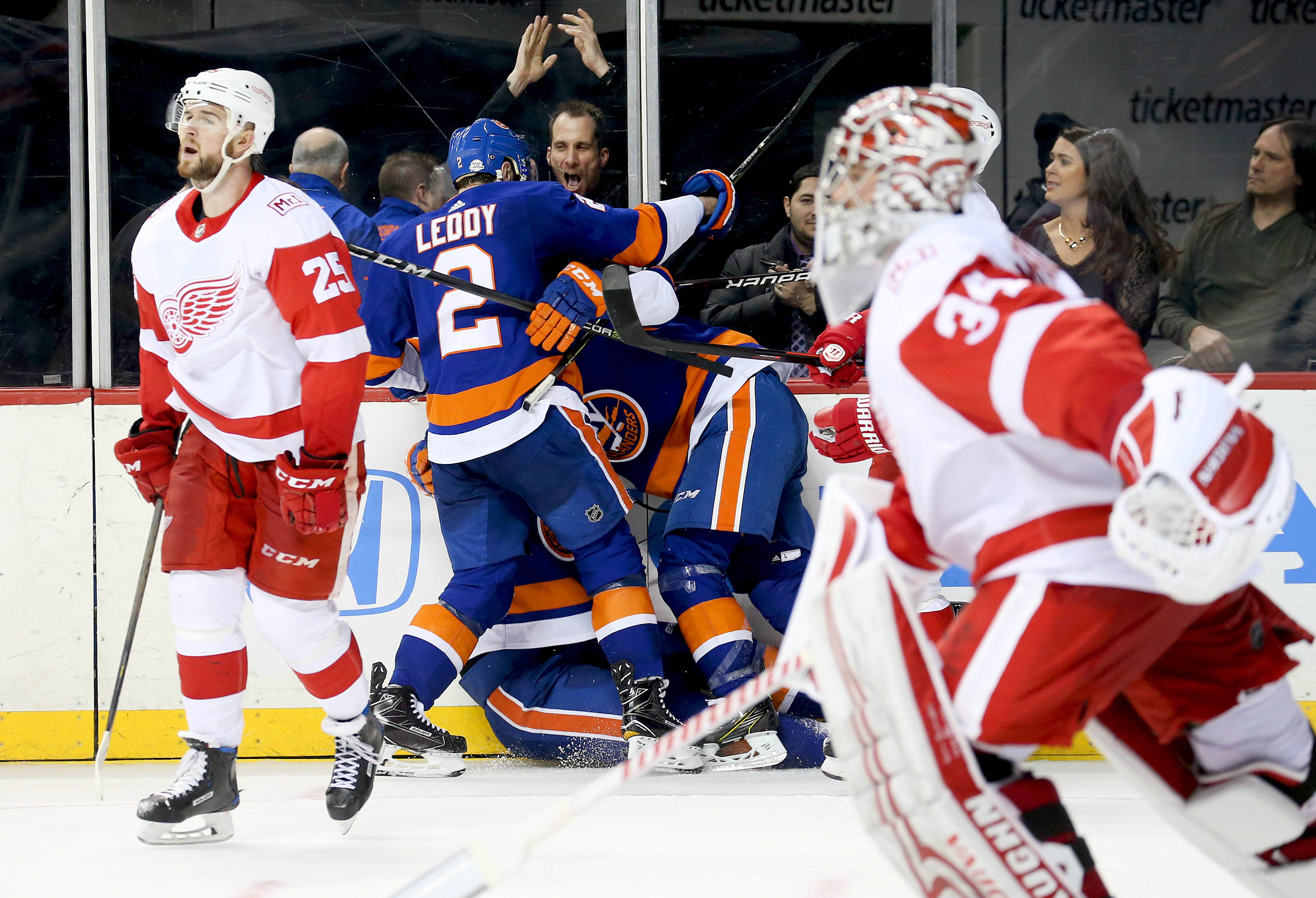 It was the Detroit Red Wings forward’s five-minute major and game misconduct that facilitated a late-game comeback by the Islanders and the eventual 7-6 win in overtime. The Islanders scored four consecutive power-play goals to rally from a 5-2 hole in the final 5:26 of regulation.

The already whacky game ended up in overtime after Mike Green tied the game at six with 29 seconds left in regulation, but it was Brock Nelson who won it in overtime after he scored off a feed from Mathew Barzal. The goal completed Nelson’s first hat-trick of the season and the helper was Barzal fifth of the game.

“That was a wild one for sure,” Nelson said. “I’ve never been a part of a game like that where you have momentum, lose it and get it all back. Get the lead, give it up and find a way to win it again. Credit to all the guys for sticking with it on the power play. It was obviously huge.”

The dramatic victory was just the Islanders second win in their last six games since the All-Star Break and helped the team vault back into playoff position. The two points helped the Islanders leapfrog the Columbus Blue Jackets for the final wild card spot in the Eastern Conference and kept them a point in front of the Philadelphia Flyers.

Almost equally important, it helped erase some of the ghosts of the previous night’s loss in Buffalo. In almost eerily similar fashion the Islanders found themselves in the same spot they were the night before against the Sabres; Down 3-0 in the middle of the second period.

“I think we were frustrated with the way the first bit of the game went,” said Josh Bailey, who scored the Islanders sixth goal of the night. “You have to try to use that in a positive way and not a negative way. I thought the third period we were able to start good and got a couple big goals from Brock and it was all in all a good way to end the night.”

It was Nelson’s second goal of the night that got the ball rolling for the Islanders power play. Nelson deflected a shot from the top of the slot by Mathew Barzal past Petr Mrazek to cut the Red Wings lead to 5-3.

Anders Lee scored just under a minute later to pull the Islanders within one and Nick Leddy tied the game at five with a shot from the top of the slot. Bailey gave the Islanders a brief lead, but Green wiped it away with a goal of his own before Nelson scored his third goal off the game to win it for New York.

“Losing the lead late with 30 seconds left, finding a way to come back in overtime was huge,” Nelson said.

The Red Wings had jumped out to an early to start the game. Anthony Mantha scored 2:13 into the game and Martin Frk gave Detroit a two-goal lead by the 5:12 mark.

Henrik Zetterberg scored at 14:40 of the first period to put the Red Wings up by three.

Jordan Eberle scored near the midway point of the second period to get the Islanders on the board and Nelson scored his first goal of the game 3:02 into the third period to pull New York within one. Darren Helm and Mantha each scored to give the Red Wings a two-goal cushion before the Islanders rallied.

“It was a pretty incredible display of a power play,” Islanders head coach Doug Weight said. “They just went at it and shot pucks. Hungry around the net and made some great plays.”

This and That… Lost in the chaos of the game was a pretty memorable night for Mathew Barzal. The Islanders rookie recorded his third five-point game this season, becoming the first rookie to do so since Joe Malone of Montreal achieved the feat during the 1917-18 season. Barzal also became the first rookie in NHL history to have two five assist games… Johnny Boychuk competed in his first game since December 27 against Buffalo. The Islanders defenseman saw 15:18 of ice time and dropped the gloves with Justin Abdelkader in the second period… The Islanders four power-play goals in five minutes were the most the team has scored in a single period in franchise history.