RECAP 56: Pearl of the Stars 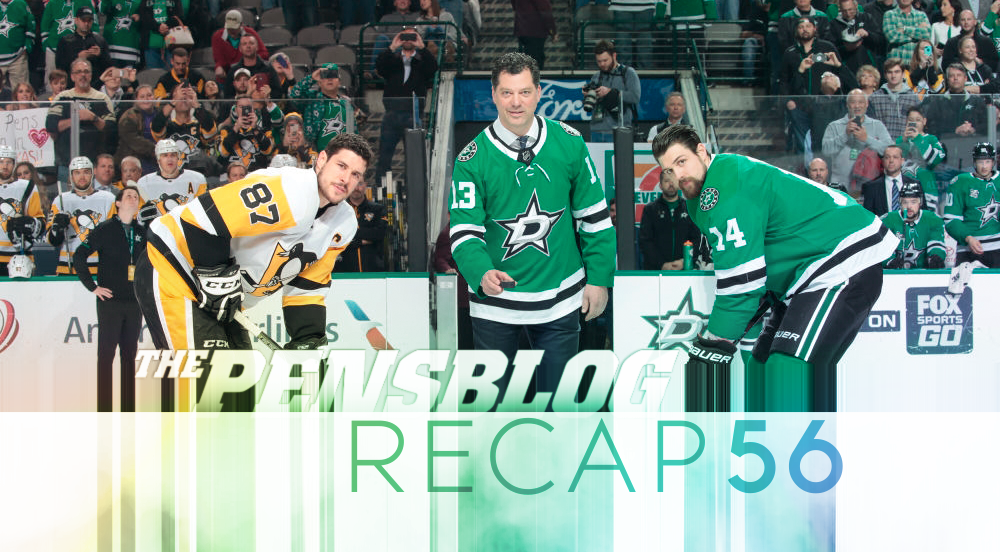 RECAP 56: Pearl of the Stars

For the first time this season, the Penguins technically lost a game after taking a lead into the third period.

It was in the shootout, so how much does that really count as a loss?

The answer is a little, if for no other reason than because they squandered a 2 goal lead with Billy G in the house.

One redeeming factor in giving away a 2-0 lead and having to score late to give everyone free hockey was the fact that the Pens showed a shit load of resiliency to nut up, grab the game by the balls, and take control of their destiny immediately after going down 3-2.

There is no doubt that Billy G would have walked into that locker room if they lost in regulation and beat his children with his belt.  If that wasn’t enough motivation to show signs of life, nothing is.

So while the Pens are now 17-0-1 when taking a lead into the 3rd, they maintained their 2 point margin over the Devils for that 2nd place spot in the Metro.  As the month of February rolls on, the Penguins have a 2 week period coming up to build a nice cushion for themselves again non-divisional opponents before traveling to Columbus, Carolina, and hosting NJD to finish out the month.

HCMS welcomed Sheary back into the fray after initially appearing to be out multiple weeks.  Rowney’s injury against Vegas didn’t linger as much as it looked like it would as well, meaning Teddy Blueger would not get to make his NHL debut.

It took the Pens to the midway point of a dominant first period, where they owned nearly 60% of the even strength shot attempt share, to open the scoring.  As Cole swept up and broke out the puck up the wall to Aston-Reese, ZAR sucked Pittsburgh native Stephen Johns down the wall and made a deft little area pass for Sheahan to blast through the neutral zone and head in on an abbreviated 2v1 with Rust on a covering Lindell.  Lindell played pass the whole way, opening up the lane for Sheahan to drive the net and slip a little backhander fivehole on Lehtonen to get this b rolling.

But on the next shift, Brian Dumoulin found himself in the sin bin for high sticking Seguin to give the Stars a chance to tie it up immediately with the man advantage.  The Pens PK pressed high on the 4v3 situation as the Stars created a lot of movement and congestion, but a soft Klingberg pass to Seguin was read and picked, sending Hags off to the races.  May be one or two players on the planet that are catching Swag when he’s in flight like that and it ain’t John Klingberg.  No chance for Lehto.

As it looked like the Penguanos were going to escape the first up 2, their lead was cut in half.  Some guy named Heatherington, which is allegedly a real last name, collected the puck at his own blue line and hit Ty Ty at the Pens line in a little bit of space.  Crosby was there, but not in the position to keep Seguin from getting the deep chip in for Radulov to get in heavy on Dumo, forcing the turnover to Benn in the process.  Crosby was just slow enough to follow Seguin to the net as Oleksiak picked up Radulov for Benn to feed Seguin for the finish.

After an even, goalless, penalty-less, yet eventful 2nd period which saw the Stars hit Matt Murray with 12 shots on target while the Pens attempted 22 of the 42 shot attempts and 13 of the 25 scoring chances at evens.  But early in the final frame, the Pens 4th line got caught on the ice against the Benn-Seguin-Radulov-Klingberg foursome, which is markedly not good (e5).  Benn taking the puck east-west with Radulov in support drew Rowney, Jultz, and Maatta over to the wall.  With Reeve’s coasting and Simon dropping down low, Seguin, Johns, and Klingberg were all alone up high to take any number of passes.  Radulov hit Klingberg before he got outnumbered down low for the clean 1T.  Game on.

Four minutes later, the Stars would grab their first lead of the night with the Benn-Seguin-Radulov line playing architect again.  After an errant Seguin pass to Hamhuis up high went by the wayside, Hamhuis was still able just barely to beat Rowney to the loose puck and work it down low to where Radulov was once again lurking.  He beat Jultz and Maatta both with a quick pass to Benn in the opposite corner to work it back up high for a quick shot from Pateryn.  Guentzel, Maatta, and Sid got themselves in the shooting lane, but the shot still found its way through to Murray for the stop.  Because the Pens had 3 guys on the strong side of the ice when the shot came in, it meant no one was covering Hamhuis at the opposite point as the rebound came out, asking to be hammered home.  Hamhuis obliged.

That goal was a wakeup call for the Penguins, who, up until that 3rd goal, were getting caved in by the Stars.  Going behind tilted the ice back to their favor, in which they limited the Stars to just 7 total shot attempts between the two teams’ third goals.  The Penguins, in that same span, attempted 17 shots.

With that being said, the Penguins needed the extra skater late in the period to bring home the equalizer and at least 1 point.  It wasn’t without drama, either, as just before the goal, Radulov was hounding Letang and nearly forced 58 to put the puck in his own net.  Run the Jultz made the stop and started the breakout with Malkin lugging the biscuit.  The big boys got shit set up with 71 being the trigger man on the half wall.  His attempted feed to 87 slashing into the low got blocked by Johns immediately, but only as far as RTJ on Ovi Street to bomb a shot through the slew of bodies to send it to OT.

But as the two sets of superstars put on a show in OT, we were stuck having to view a shootout which had just 1 goal in it.

After a save on Radulov and a Malkin miss, Seguin would tally the lone goal on a quick snapper.  Despite Murr getting a solid chunk of it, the puck had eyes and trickled its way across the goal line.

Neither Phil nor Crosby would match Seguin’s goal on either side of a Murr stop on Spezza and that was that was that.