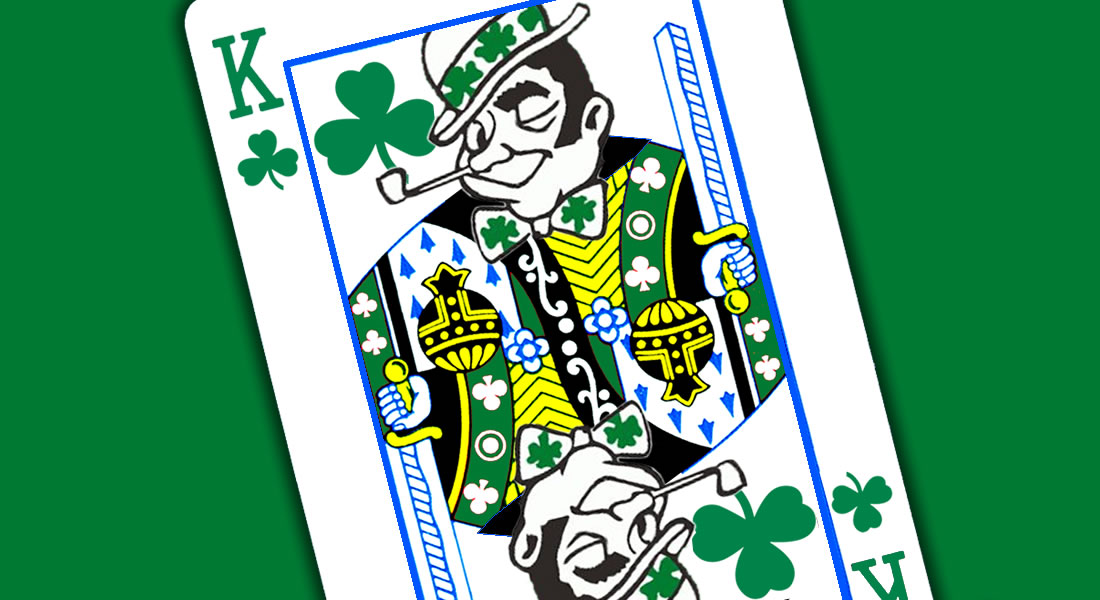 Though he said he has not spoken much with Pierce since joining the Celtics, Irving thinks he should start using his status as Boston’s new star to begin building relationships with some of the team’s legends.

“This is all so new to me,” he said. “So I know that I’m part of almost a forever fraternity now that I’m (with the) Boston Celtics. I think I should start using that card a little bit more.”

“So, as you can hear, I’m a fan (of Pierce),” Irving added. “I’ve been a fan for a long time. I’m a fan of a lot of greats, but his legacy will live on forever on Sunday, with his jersey retired with a lot of other great players that have played within the organization around the league.”

Hey Kyrie–I’ve got a great resource for you, if you’re looking to find out more about those other great Celtics that have had their numbers retired…

I could talk about the Celtics’ sleepwalking through the first half of last night’s game, but frankly, Jay King’s description can’t really be topped:

They looked like they had just emerged from a Las Vegas casino at 8 a.m., lost their vision in sunlight, and suddenly realized the impact of a four-night bender. They played like 300-pounders ready to puke at the tail end of a triathlon.

And, besides, it’s Paul Pierce’s weekend. The Celtics will be hosting the new look Cleveland Cavs tomorrow, and frankly, I’m curious whether the Cavs will have uniforms with both names and numbers on them by game time. Given the issues Nike has had thus far this season, it’s hardly a sure thing.

Page 2: Where Danny was happy to sit on the sidelines this year

“We’d gotten a little bit of wind that they were making some big changes but without knowing the details of it,” Ainge said when asked about Cleveland’s deadline activity. “But, listen, we have our own problems to worry about and we’re just taking care of the Boston Celtics.

“There was an idea that we didn’t need to do anything. We really liked this group of guys and, obviously, they have been having success. We have a really good core young group of guys too, along with [All-Star big man] Al [Horford]. We don’t really want to make a mess out of that but, at the same time, you just never know when good players could become available. We had to kick the tires, but we didn’t feel the need to do much.”

I’d like to know just how much info the Celtics had on Cleveland’s moves. The Celtics could not have traded for IT or Jae, but they could’ve taken any of the other guys that the Cavs had available, and who knows what sort of offers Altman pitched to Ainge over the past couple weeks.

As it is, the Celtics got a bit better (hopefully) by signing Monroe while the Cavs seem to have put a lot of effort into the Sisyphean task of retaining LeBron for another season–or, perhaps, setting themselves up to not stink quite so bad after he leaves. Frankly, I don’t think they accomplished either aim. As several were wont to point out, the Cavs effectively traded Kyrie Irving for the Netspick, Jordan Clarkson, Larry Nance, Jr., and Rodney Hood. Which. I mean. How does that look to you?

“One of the last games of the (2005-06 season) we played Minnesota — guys like Ricky Davis were on the team — KG was at the line, and there was a lot of talking going on between players. I remember looking at Wyc (Grousbeck), pointing at Kevin, and telling Wyc, if we’re going to win a championship then you have to go get that guy, right there.”

Thinking back to his injury troubles the following season, Pierce laughed.

“I always look at my getting hurt as a blessing in disguise, because if I had been healthy maybe that draft pick isn’t worth as much, and then the trades for Ray Allen and KG don’t happen,” he said. “Oh man, what came after that rejuvenated me. I was like, oh man, finally we have the opportunity to compete for a championship. Getting ready for the season, everything had changed. The game was fun again. You get tired of all the losing — guys didn’t like that. Basketball is supposed to be fun. Look where we were all coming from — Kevin didn’t make the playoffs in Minnesota, Ray Allen didn’t make the playoffs in Seattle.”

Look at that again:

Oh man, what came after that rejuvenated me. I was like, oh man, finally we have the opportunity to compete for a championship. Getting ready for the season, everything had changed. The game was fun again. You get tired of all the losing — guys didn’t like that. Basketball is supposed to be fun.

NBC Sports: Kyrie Irving on Paul Pierce: He always rose to the occasion

Boston Globe: Joe Johnson, Marco Belinelli have potential to fit in with Celtics (ugh. No Belinelli. No. Bad. No. No.)