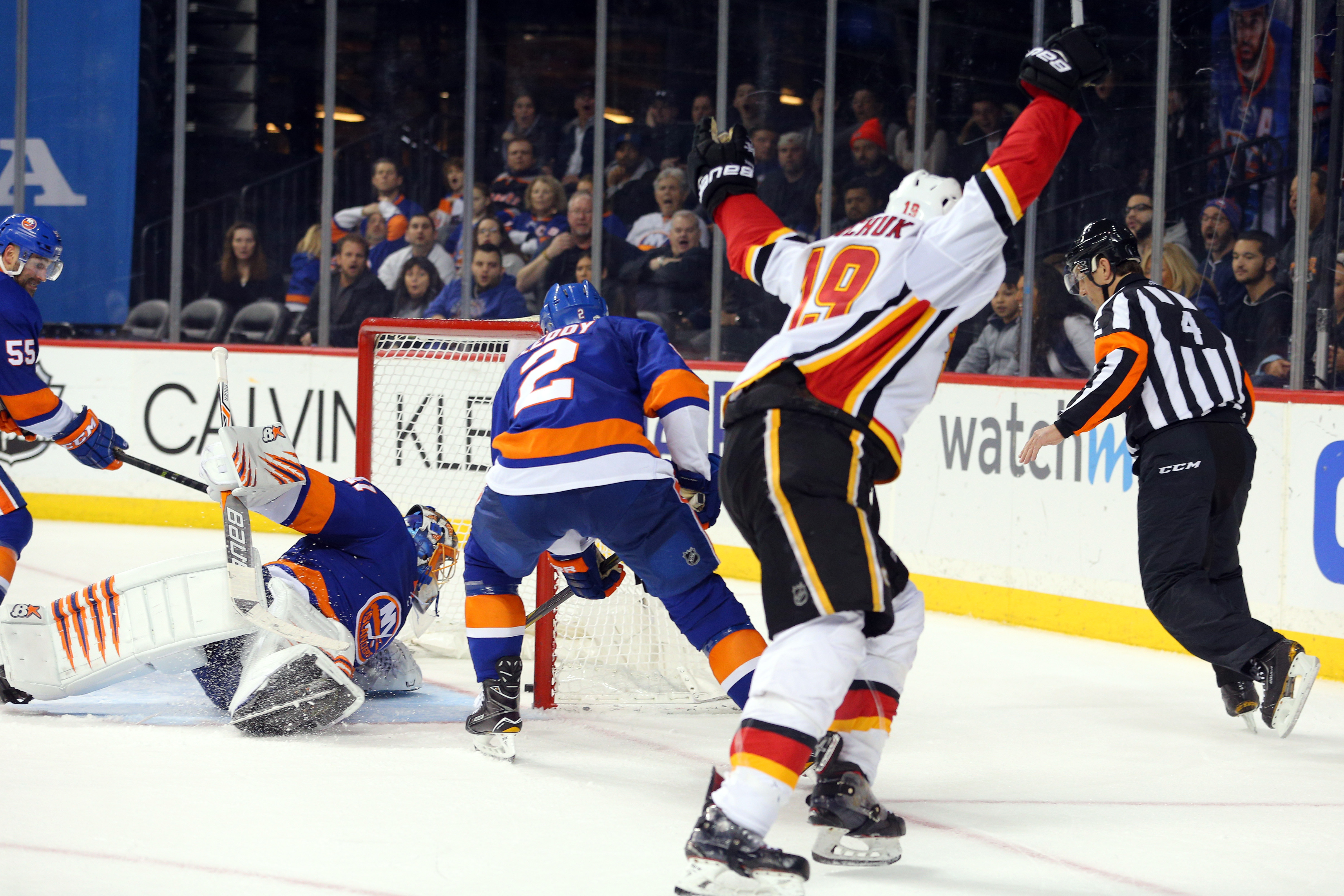 NEW YORK — It was another night of the same old story with the Islanders on Sunday.

Two points squandered away as the Islanders watched a two-goal lead evaporate into a 3-2 loss to the Calgary Flames at the Barclays Center. Matthew Tkachuk scored twice in the third period to help vault the visiting Flames past the Isles, with former Islander defenseman Travis Hamonic assisting on the game-winner.

Like so many times before, the Islanders wasted an opportunity to gain some ground in the Eastern Conference standings. A win would have moved the Islanders back into the final wild card spot in the east as well as pulled them even with the New Jer Devils in the standings.

“We’ve seemed to do that to ourselves a few times this year,” John Tavares said about the lead slipping away. “A couple lately. Giving up way too many late goals. Giving up too many goals in general, so it’s just making it harder for us down the stretch here to get to where we want to get to. Obviously an area we need to be a lot better in.”

Tkachuk scored his first of two goals at 9:38 of the third period to tie the game at two. He proceeded to score the go-ahead goal with 1:05 left in regulation.

Hamonic fired a shot from the blueline and Tkachuk deflected the puck by Jaroslav Halak.

“We were intense to start,” Islanders head coach Doug Weight said. “We paid good attention to things we needed to do there early. But after that, we didn’t. I guess if that’s in the category of intensity, then probably pretty poor.”

The Islanders once again saw a high volume of shots make their way to their goaltender. For the ninth time in the last 10 games, an Islander goaltender had to face 30 or more shots.

Halak made 39 saves on 42 shots in Sunday’s loss and faced 35 or more shots for in his 12th home start. The Islanders managed to hold the Flames to nine shots in the first period, but found themselves being outshot 33-14 in the final 40 minutes of the game.

“We let them take the play to us,” Casey Cizikas said. “Plain and simple, we didn’t get pucks in deep. We were working hard, but we weren’t working smart. It’s just a matter of getting it in deep, taking it, getting in on s forecheck and learning their time and space. I just thought we had too many turnovers.”

While the Islanders lamented another blown opportunity, a former teammate enjoyed the outcome of Sunday’s game. Hamonic made his return to Brooklyn to face his former team for the first time since being traded to Calgary at the draft.

It had been an emotional day for Hamonic, who very emotional following the Flames morning skate at Barclays Center and enjoyed getting to see his former home again. The Islanders paid homage to Hamonic’s seven seasons with the organization with a video tribute during the first TV timeout.

“To has just been a weird day and kind of emotional,” Hamonic said. “When I think back to my time (with the Islanders) I’m so proud of so many things… The video was really touching and to get that ovation in warmups and during the video and the respect the Islanders showed by all getting up it meant a lot. I’m happy the game started playing right away again.”

Casey Cizikas had opened the scoring in the first period with his seventh goal of the year at 3:08 of the first. Anthony Beauvillier made it 2-0 Islanders when he scored at 2:59 of the second period.