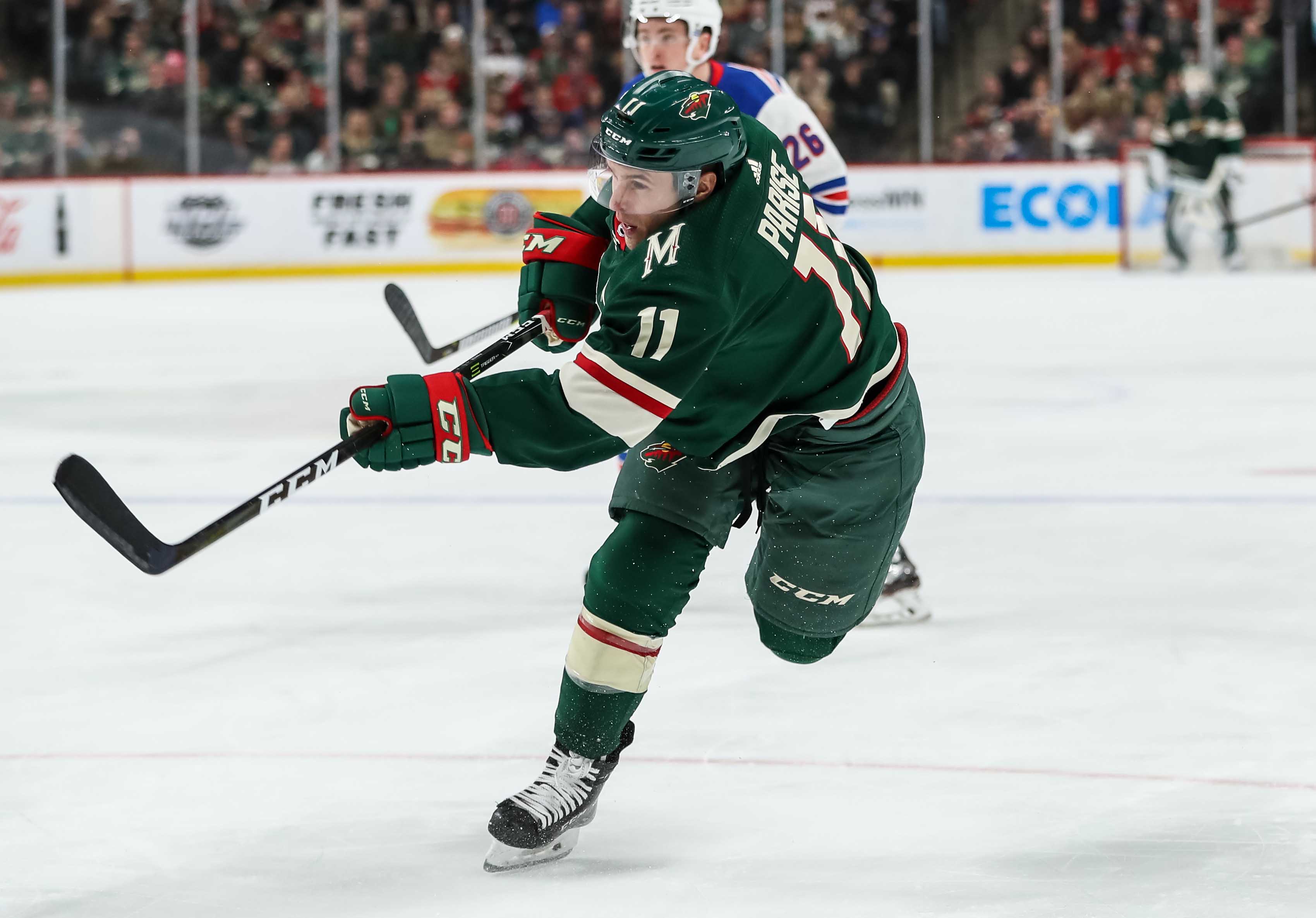 For some hockey fans they are bummed the NHL decided to stay out of the Olympics in Peyongchang, South Korea and have questioned whether its worthwhile hockey to watch as the Winter Games marquee team sport.  With all due respect to the ‘Miracle on Ice’ and the ‘Forgotten Miracle’ there are more reasons to pay attention to watch besides the victories.  At times an individual can distinguish themselves and earn the visibility that an international event like the Olympics can provide.  At the 2010 Winter Olympics games in Vancouver, Mats Zuccarello was a pesky forward for Team Norway who ambushed a few teams with their blue collar effort.  Zuccarello parlayed that strong performance into a contract with the New York Rangers where he has been one of their best players ever since he arrived.

So with a non-NHL attended Olympics it will let fans just enjoy hockey for what it is.  Besides, it gives fans a chance to watch prospects like Jordan Greenway and Kirill Kaprizov in another pressure-packed international tournament.  The Rangers persevered and earned a big road win over the Winnipeg Jets, so can the Wild rally to earn a victory against a loose New York squad?

1st Period Thoughts:  I must admit the opening 45-seconds made me wonder if the Wild were going to give another coasting type of effort.  Those fears would quickly dissipate as Minnesota would light the lamp early as a turnover in the neutral zone turned into a quick 2-on-1 for Eric Staal and Nino Niederreiter.  As Staal poked the puck past Josh Holden he’d skate down the wing as Anthony DeAngelo didn’t really commit to the pass or the shot and that left Henrik Lundqvist to guess and he’d guess wrong as Staal fired a bullet of a shot into the back of the net.  1-0 Wild.  Minnesota would add another just a little over a minute later as Rick Nash would cough up a puck to Zach Parise and the puck would skitter towards the goal and sneak off the goal pad and inside the post and in.  2-0 Wild as Lundqvist threw his hands up in frustration.  It would not get any easier for Lundqvist and the Rangers as Daniel Winnik did a great job of out battling Neal Pionk for a puck and he’d push it out into the slot where Marcus Foligno was left all alone to blast a one-timer by the New York goalie.  3-0 Wild as Lundqvist clearly berated the half-hearted effort in front of him.  The first few minutes after Foligno’s goal, the Wild continued to swarm and Joel Eriksson Ek would be left alone for a blast from the slot that Lundqvist gloved out of the air.  It was near this point the game would turn as Niederreiter sent a puck into the stands for a delay of game penalty.  The penalty gave the Rangers some much-needed relief and Minnesota’s penalty killers did not do a good job of challenging the puck carrier and instead let New York get comfortable and have a number of uncontested shots from the point.  The Rangers would strike on the power play as John Gilmour stepped into a slap shot that may have been partially deflected / screened by Parise that beat Devan Dubnyk.  3-1 Wild as it was Gilmour’s 1st NHL goal.  Considering the long distance of the shot I think the goal was a bit soft but I’m sure goalie apologists will tell me I’m being too tough on the Dubnyk.  The goal seemed to wake the Wild up a bit and late in the period the Wild started to move its feet more and generate more offensive chances.  Part of Minnesota’s issues through the middle part of the period were poor passing which really made it impossible for the Wild to enter the zone with any sort of cohesion.  The Wild would get a power play late, where they’d use 4 forwards and one defenseman which created a few nice shots for Matt Dumba but I’m not sure if I was feeling too confident about the ability to handle the puck near the blueline.  Still, the Wild had to feel pretty good about holding a 3-1 lead going into the 2nd.

2nd Period Thoughts:  If you vomited in your mouth, then you kind of know how things went for the Minnesota Wild in the 2nd.  Minnesota appeared to be a fog mentally and carried over into a series of boneheaded turnovers which meant they spent most of the 2nd chasing the Rangers in its own end of the ice.  It wasn’t just bad passes, but lazy and downright stupid passes that almost made one wonder if they were being given some kind of incentive to throw the puck away for little or no reason.  Devan Dubnyk had to have wondered if he had literally traded places with Henrik Lundqvist for how little support he was having in front of him.  The Rangers would cut the lead to one as Kevin Hayes scored on a counter attack goal after Minnesota blew a 4-on-2 the other way.  3-2 Wild and at this point you have to feel as though the Wild really don’t have a lead that anyone can count on.  The Wild were going to need at least another goal (if not more) to win this game but no one really seemed to want the puck on their stick.  Zach Parise had a decent chance that was stopped by Lundqvist but Matt Cullen couldn’t sweep in the rebound as he fanned on it instead.  Penalties also helped the Rangers gain confidence and momentum throughout the period.  Minnesota was giving the Rangers a lot of time and space on the power play and that is never a good thing as they were content to just wind up and blast uncontested shots from the point.  It was ridiculous.  The Rangers outshot the Wild 19-8 and Minnesota was very fortunate to still have a lead going into the 2nd intermission.

3rd Period Thoughts:  If the 2nd period was like throwing up in your mouth, the 3rd was like feeling like you were seconds away from needing to run to the toilet.  You didn’t feel comfortable at all as you feared the worst.  Minnesota didn’t just sit back and play rope-a-dope like they did throughout most of the 2nd, but they didn’t put much pressure on the Rangers offensively either.  Beyond a few token chances, most of the play was in the neutral zone as Minnesota clogged things up with a 1-2-2.  In the defensive zone, the Wild did a reasonable job of forcing the Rangers to the perimeter and getting sticks and bodies into shooting lanes which kept the Rangers to a remarkable 4 shots on goal.  I think everyone expected the team to squander its one-goal lead but the Rangers just couldn’t get their stick on the puck at the right time and Minnesota would hold on for a 3-2 victory.

Devan Dubnyk had 32 saves in the victory and he had to be good in order for the Wild to earn a win tonight.  I thought defensively the Wild were giving the Rangers too much time and space in the offensive zone, especially in the 2nd period.  Nick Seeler was ok in his debut but nothing special.  He is a lot like Nate Prosser; except I think the veteran is a better passer than Seeler.  This team really misses Jonas Brodin for the ability to make the accurate outlet pass to get the attack going the other way.

Offensively the Wild had a good burst to start the game, taking advantage of some atrocious defensive play by the Rangers.  Unfortunately the Wild took their foot off the gas mid-way through the 1st period and came dangerously close to throwing away another 3-0 lead.  Joel Eriksson Ek needs to be rewarded soon; as his effort continues to be among the best on the team each game but he just can’t buy a goal to save his life.  I thought Tyler Ennis was shifty and creative with the puck.  Parise’s goal was more fluke than skill, but good puck pressure created it and that is one of his trademarks.

This game was eerily similar to the Arizona game where the Wild just seemed to coast and the mental focus to simply finish off the Rangers with a few more goals in the 2nd and 3rd just didn’t seem to be there.  The victory helps give the Wild some separation especially with Anaheim and Los Angeles losing this evening.  Minnesota now has another challenge against another inconsistent team in the Washington Capitals on Thursday.  Hopefully the Wild recognize their mistakes and make sure they’re ready and focused to shut down Ovie, Oshie and Backstrom.

Iowa seems to be on the verge of a historic season where they find themselves in good position to qualify for the American Hockey League playoffs for the first time since moving to Des Moines in 2013.  It has been a long wait but Iowa fans are starting to pack the building more and more, especially as news of the Minnesota Sports & Entertainment (the parent company of both the Minnesota & Iowa Wild) renewed a 5-year lease to stay at Wells Fargo Arena.  While the big club played Chicago, Iowa played the Blackhawks’ AHL affiliate Rockford in a Central Division showdown.  Iowa would strike first as Kurtis Gabriel scored his 1st goal of the season (he’s been hurt most of the season) as he buried a rebound off a shot from the point by Brennan Mennell.  1-0 Wild.  Rockford would answer back a few minutes later as Tyler Sikura found the twine behind Niklas Svedberg.  With the game knotted at 1-1 at the end of the 1st, the game would open up in the 2nd period.  Svedberg and Rockford’s Jean-Francois Berube were solid and the game would remain tied going into the 3rd.  A high-sticking penalty on the Ice Hogs would give Iowa a golden opportunity to take the lead about halfway through the period and they would take advantage of it as Justin Kloos blasted a one-timer by Berube giving Iowa a 2-1 lead.  Svedberg was solid down the stretch and the Wild would prevail 2-1, he had 36 saves in the victory.

Iowa would follow up this win with another on Monday as they defeated San Antonio 3-2.  Luke Kunin had 2 goals and a helper in the victory.  Ryan Murphy had two assists.  Svedberg had 27 saves in the win.

D – Jack Sadek (Minnesota, Big 10) ~ the Gophers earned a big sweep this weekend over Wisconsin and the former Lakeville North star chipped in a helper in Minnesota’s 7-1 win over the Badgers on Saturday.  Sadek has 2 goals, 8 points, 32 PIM’s and is a +2 in 32 games.

D – Gustav Bouramman (Rapid City, ECHL) ~ the skilled defenseman is having a reasonable start to his professional career and he had a goal and an assist in the Rush’s 2-1 win over Utah on Saturday.  Bouramman has 5 goals, 20 points, 18 PIM’s and is a -10 in 37 games.