Isles Insights: Another high volume of shots given up in Isles' latest loss 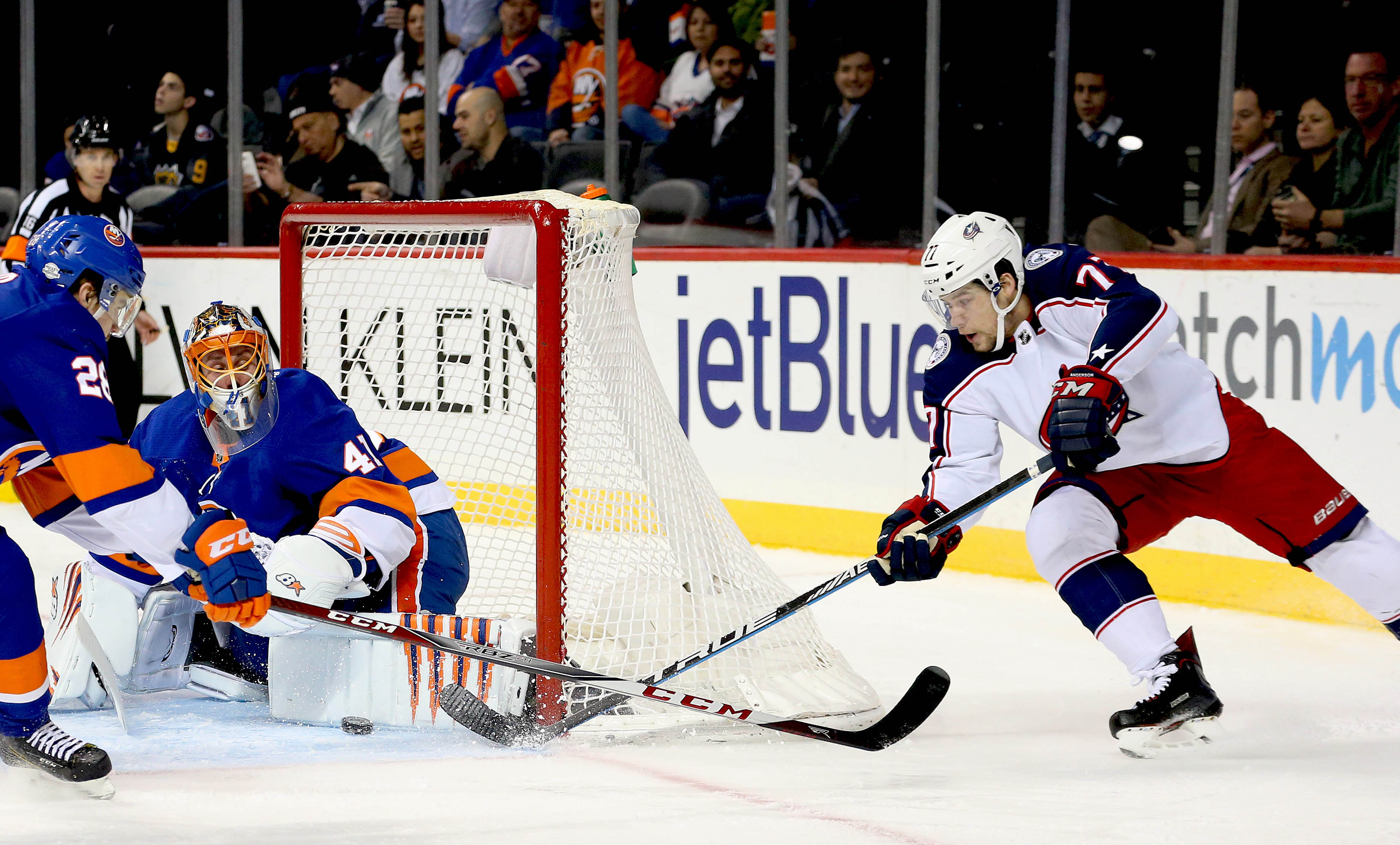 Isles Insights: Another high volume of shots given up in Isles' latest loss

NEW YORK — The Islanders surrendered four unanswered goals in the second and third periods and dropped an important game to the Columbus Blue Jackets, 4-1.

Oliver Bjorkstrand, Pierre-Luc Dubois, Brandon Dubinsky and Cam Atkinson all scored for the Blue Jackets. John Tavares had the only goal for the Islanders in the loss.

The Islanders had a 1-0 lead to open the second period, but that disappeared after a power-play goal by Bjorkstrand at 6:02 of the second period. From there the visiting Blue Jackets added three more goals before the final buzzer.

The Islanders continue their division heavy week with a Thursday matchup against the New York Rangers.

1. The Islanders don’t seem to have an answer for how to stop the exorbitant amount of shots they continue to give up. The 51 shots against on Tuesday was the second highest volume of shots they have given this season, with the highest being the 56 they surrendered against Toronto. Following the Islanders latest loss, they have now surrendered 30 or more shots in 23 of their last 24 games.

Still, there doesn’t seem to be an answer on how to curtail the continuing problem. The team knows what they need to do to bring down the level of shots, but their execution just hasn’t been there. Even Islanders head coach Doug Weight said there was no execution on Tuesday night. His only answer was that the team needs to “be better” and they have to try to get the players going.

3. The Islanders had given up 41 shots by the end of the second period. It was the ninth time this season that has occurred at home, which was a franchise record… Not the good kind.

4. Doug Weight had an interesting answer to a question from Stan Fischler during the postgame press conference. Stan asked the Islanders coach if the leaders were leading, which Weight replied, “They’re trying to it’s just a tough time. A couple guys have hit some lulls and they’re trying and it’s not working.” It’s hard to make out exactly what or who Weight was indicating as far as team leadership goes, but considering the turn the season has taken the answer raises a few questions.

5. As far as a possible call-up or trade to spark the team, Weight deflected the question. “That’s not my question to answer,” he said.

6. Jaroslav Halak was not in net for the games the Islanders gave up 56 and 50 shots, but he has felt the brunt of the team’s inability to limit their opponent’s shots against. Halak has seen 33 or more shots in 14 of his last 15 starts for the blue and orange and in that same span he has faced 40 or more shots on six occasions.

Halak had to stop 26 shots in the first 20 minutes for the second time in 10 days after doing the same thing in the Islanders earlier meeting with the Blue Jackets on February 3.

7. Halak may have had the most biting takeaway from Tuesday’s loss. The Islanders goalie has not been shy about sharing his feelings about his team’s performance. “I think we need more from everybody, that’s the bottom line,” Halak said. “That’s how we are going to win games and when we come up as a team we play the best that we can.”

8. “They got 25 shots in the first period. They got a couple power plays. They shot the puck on the power play and five on five. Everyone wants to make a story out of that, but at the end of the day it was a 1-1 hockey game with a couple minutes left in the second period. Scored on a power play and then they scored on a couple broken plays in the third period.”

9.  The fans were as restless as ever during and after Tuesday’s loss and certainly made their feelings known. Chants of “Snow Must Go” had been echoing through the building after goals in previous games, but they were at their loudest on Tuesday as the end of the game drew closer and an Islanders loss became all but certain. Hard to blame them for their angst towards the general manager considering the importance of this season.

10. A lot was made about Weight’s comments after the game when he referenced the energy in the building. The Islanders coach was answering a question from Arthur Staple of the Athletic about the staff has left to turn to when he mentioned the hope for a more exciting building on Thursday. The full quote reads:

“Well it’s been five minutes or 10 minutes since the game has ended and we have a day. We had two in three nights here and you 25 games, 24 games left. There’s points out. It doesn’t matter if you get eight points now or the eight points later, but we need to get better and improve. Whether that means doing a couple different things or personnel or whatever we have to figure it out. Have a real exciting, hopefully, a little more exciting building than it was from the start on Thursday.”

I’ll give Weight the benefit of the doubt here and say that his intention wasn’t to throw any shade at the fans for the atmosphere on Tuesday night. But given the whole context of the evenning, it’s easy to see how the comment could get blown out of proportion.