Your Morning Dump... Where the Celtics desperately need a jolt of Marcus Smart 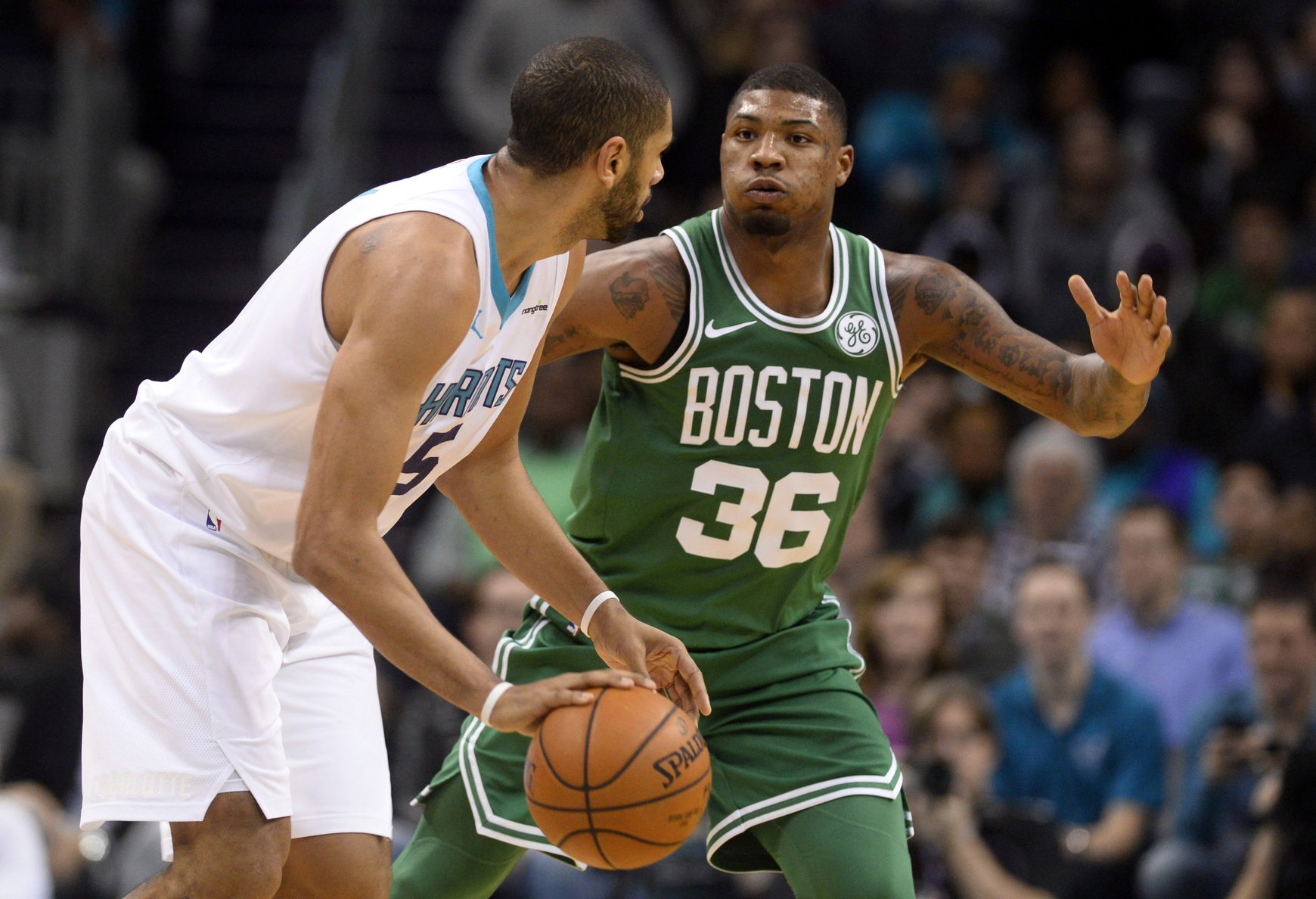 Your Morning Dump... Where the Celtics desperately need a jolt of Marcus Smart

Injured Celtics guards Marcus Smart and Shane Larkin will not play Wednesday night against the Los Angeles Clippers but appear on track to resume team activities when the All-Star break concludes, according to Stevens.

“Both of those guys are trending positively towards rejoining practice on the Wednesday after All-Star break,” Stevens said.

As practice ended, Larkin could be seen sitting on the sideline with a wrap on his knee. Smart (hand) did not participate in practice, but went through shooting drills afterward.

Reflecting on the last week of games, Stevens went out of his way to point out the Celtics missed Smart and Larkin especially during a loss to the Toronto Raptors.

“Against Toronto, we need to play fast,” Stevens said. “Obviously with Shane and Smart, they will play roles against those guys. Against Washington, I didn’t think we played as well and we won the game. Against Indiana, we played terrible out of the gate but then had one of the best third quarters we’ve played all year. And then Cleveland we followed that up with one of our best first quarters we’ve played on the offensive end. We just haven’t put it all together against really good teams. This was a stretch of games that you knew would be very tough, but we didn’t play as well as we’d like. That’s probably the most concerning thing. Not surprising, but concerning.”

“I think getting healthy after (the) break will help us greatly,” Stevens added. “But our team has done a good job of not leaning on that. We’ve covered for a lot of guys out all year, and we’re going to have to do it again tomorrow night.”

I’m not saying Marcus Smart and Shane Larkin are key to the Celtics’ success, but a team with little margin for error can’t be expected to thrive without two rotation guys. (Trust me, I still can’t believe Larkin is a rotation guy).

When a game plan stalls or a team loses its collective way, the coach often relies on energy guys to shake things up. Smart and Larkin are 2/3 (Rozier completes the troika) of Brad’s 5-hour energy cocktail.

I also realize there’s some hypocrisy in this post. I’m pretty sure I kicked Marcus to the curb after his off the court screw-up in LA.

But this team is struggling.  Everything was supposed to get easier (schedule wise) after the London trip.

Instead… look at these hideous numbers, courtesy NBC Sports Boston:

After tonight’s game vs the Clippers, the Celtics don’t play again until Friday, February 23 (vs Detroit). There’s plenty of time for the guys to get away, get some rest and come back for some hard practices.

On Page 2, the Truth says KG’s number is next to be retired.

“Without a doubt, KG’s number will be [the next one] retired in Boston,” said Pierce. “It’s going to happen.”

Celtics president of basketball operations Danny Ainge said the team has had informal discussions about retiring Garnett’s number, but that a final decision would come from ownership.

There is one opening on an eight-square banner that Pierce’s number joined Sunday. Brian Scalabrine, a reserve on the 2008 title team and now a TV analyst for the Celtics, said he thinks it’s only fitting that Garnett and Pierce share a banner together in the rafters.

“They go together. Those two guys are linked. That’s how it is,” said Scalabrine. “Even the fact that there’s one more spot on that banner, that spot is No. 5. He’s the guy. They hang out [together in Los Angeles], they also hang out right next to each other on the banner. There’s no argument out there that he does not belong on that banner. No one out there can make that argument.”

I’m 100% certain that Kevin Garnett is getting his number retired. It’s deserved. Period.

But I’m in no rush to see it up there. For some reason, the Cs felt the need to immediately launch #34 into the rafters.

Give me some time to miss these guys.

Ray Allen, a conspicuous absence from Pierce’s ceremony, offered nothing but love and the Truth obliged:

“Despite what you may have heard or read or what is rumored — there is nothing but love. Paul and I are more interested in building bridges than putting up walls,” wrote Allen. “To Paul, number 34, Congratulations on having your number raised up to the rafters. I salute you for your commitment to the city of Boston and to us the 2008 NBA Champions #thetruth.”

While Pierce’s No. 34 was raised into the TD Garden rafters, Allen went golfing with George Lopez. Several outlets commented on Allen’s absence, and ESPN’s Stephen A. Smith said that there was “no reason on Earth” why Allen should have skipped out on the ceremony.

Doc Rivers, Rajon Rondo and Kevin Garnett were all in attendance.

During an appearance on ESPN’s “The Jump” on Monday, Pierce said he’s not upset at Allen for skipping out on his jersey retirement.

“A lot of guys weren’t there. And he lives where, Miami? I don’t know,” said Pierce. “To each his own. I have no problem.”

Herald – Cs have squandered chance to seize Boston stage | Irving, Horford stress focus before break | Globe – Stevens once made GH, AH coaches for a day | NBC Sports – How Monroe is acclimating to Boston system | Mass Live – With Monroe, deep front court will depend on matchups