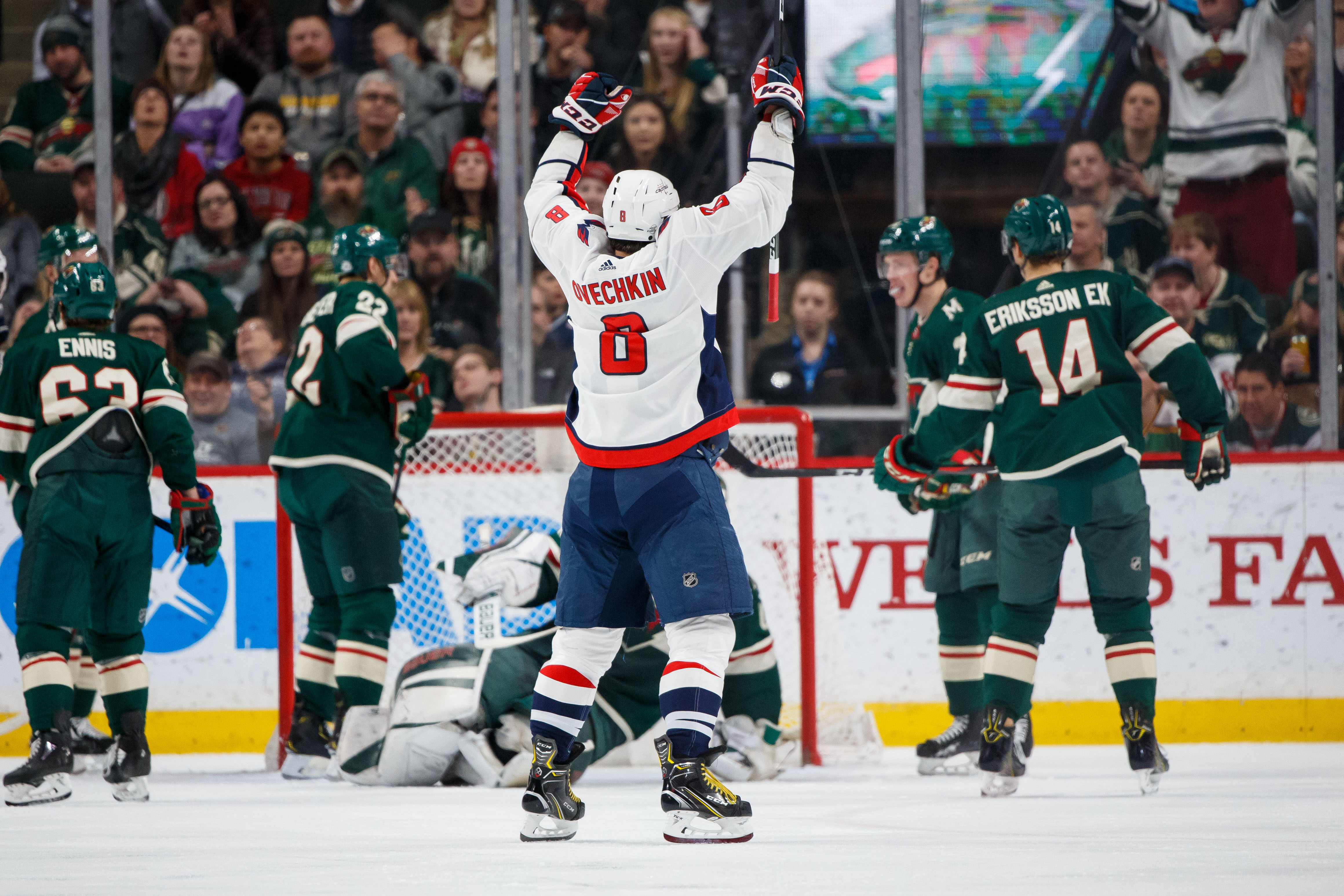 On Tuesday, there was news that the City of Seattle put in its official application for an NHL franchise.  While I am sure some markets (i.e. Vancouver) are likely applauding the news, others are probably a little apprehensive (Arizona).  The Capitals were once one of those expansion teams back during the mid-1970’s and if Vegas is supposedly the pinnacle of success, then Washington was its abyss with arguably the worst season in NHL history back in 1974 when they posted an 8-67-5 record.  They had just one road victory the entire season, how times have changed.

The Capitals are atop the Metropolitan division and while that may seem like they’re soaring, it might surprise people that the Wild (who currently sit in 5th in Central) are just 3 points behind them.  It just goes to show you how tough the Central really is.  Can Minnesota earn another important home win over the Capitals?

1st Period Thoughts:  The 1st period had good pace and was pretty even as both clubs played pretty responsibly in their own zone.  Minnesota was wise to not give Alexander Ovechkin much in the way of time and space and the Wild did a fair job at forcing the Capitals to settle for shots from the perimeter.  Devan Dubnyk appeared to be tracking the puck well and Minnesota was getting bodies on Capitals’ players to prevent them from getting to rebounds and allowing their goaltender to freeze the puck.  Offensively the Wild at times were strong on the cycle and setting up a few chances that came dangerously close to cashing in.  Their best chance was off a long pass by Mikko Koivu to Mikael Granlund for a partial breakaway and the shifty Finn lifted a forehand off the crossbar and out.  Philipp Grubauer had lots of activity in and around his crease and he had some good stops from in close.  I thought the line of Eric Staal, Nino Niederreiter and Tyler Ennis were particularly pesky on the forecheck and they were able to keep Washington bottled up in its own zone.  Penalties threatened to give the Capitals a chance to break the stalemate but Dubnyk was sharp as he got across his crease to deny Ovechkin on a few quality one-timers.  Shot blocking and hustle was able to get the big kill.  Minnesota’s defenseman were also being assertive at the right times whether it was with a deft poke check or a nice hit as the crowd cheered when Nick Seeler gave a forearm shiver to Ovechkin late in the period.  The Wild outshot the Capitals’ 8-6 and while it wasn’t the most wide-open period of hockey, Minnesota was moving its feet well.

2nd Period Thoughts:  The Capitals would strike early in the 2nd period as Tom Wilson used Jared Spurgeon as a screen as he ripped a wrist shot between the defenseman’s legs that caught Dubnyk by surprise as he was only able to get part of his arm on the shot but not enough to keep it out of his goal.  1-0 Washington.  The goal seemed to shake Dubnyk’s confidence a bit as he fought off a Nicklas Backstrom bid which trickled through the pads and went just wide.  The Capitals kept applying pressure and Minnesota started to handle the puck like it was a live hand grenade.  Washington would add to its lead a few minutes later as Andre Burakovsky drew the Wild defense down deep and he’d send a pass back into the slot to a wide open Ovechkin who settled the puck before letting go a wrist shot which snuck through the pads and in.  2-0 Washington.  Minnesota almost seemed to get its own way as they tried to move up the ice with the puck and that meant they were wasting a lot of energy and accomplishing very little with it.  It seemed like an eternity before Jason Zucker was able to use his speed to track down a puck and set up Granlund for a quick shot that was denied by Grubauer.  There were some small sliver linings in the period as Minnesota’s penalty kill shut down the Capitals a 2nd time but Minnesota wasn’t able to capitalize on its potential chances as a point shot by Ryan Suter created a rebound that was just out of the reach of a pinching Spurgeon and the Wild would exit the 2nd trailing by 2.  It was an ugly, disjointed period for the Wild where you didn’t see nearly enough fight and no cohesion.  Fortunately they only trail by two at this point.

3rd Period Thoughts:  The Wild seemed to want to rally early on in the period as they were cycling well and getting closer to generating some scoring chances but the Capitals would counter attack and Andre Burakovsky would score on a weak shot off the wing that seemed to surprise Dubnyk.  3-0 Capitals.  Minnesota would answer back as Niederreiter would cash in through hard work near the crease as he jammed at the puck 3 times before willing the puck over the goal line to cut the Capitals’ lead back to two, 3-1.  Were the Wild on the verge of a comeback?  Minnesota went to work trying to slice the lead to one, but the Wild couldn’t get enough pucks on goal and the Capitals were getting sticks on puck and really making Minnesota work for every little race for the biscuit.  The Capitals would get backbreaker late in the period as a bad turnover by Suter went right to stick of Ovechkin for a quick shot from the slot that he blasted on Dubnyk that he stopped but an alert Backstrom was there to bury the rebound.  4-1 Capitals and you could see the fans make their way for the exits with just over 4 minutes left to play.  The game started to get a bit chippy and Tyler Ennis gave Brooks Orpik a bit of a shot that he felt was to the back of the head and the former Pittsburgh Penguin would go after Ennis after the play.  Luckily for Ennis, Suter tied up Orpik before he ended up being mauled.  Orpik was the only one that was sent to the box and it gave the Wild a power play.  Minnesota would take just 13 seconds to strike on the man advantage as Eric Staal gathered up a puck beneath the goal line and he’d work a puck out front that went off a defenseman and by Grubauer to cut the Capitals’ lead back to two, 4-2.  The Wild were feeling lucky so they’d pull Dubnyk with about 3 minutes left in the game.  Unfortunately the Wild chose the wrong player to try to set up for the shot as they set up Koivu for a shot from the slot and he fanned on the puck which turned into an easy empty netter for Tom Wilson instead sealing a 5-2 win for the Capitals.

Dubnyk wasn’t good enough, giving up at least 2 suspect goals (Bruce Boudreau said 4 soft goals and I’ll agree with him) that never really allowed the Wild to get close to taking the lead in this one.  He had 22 saves in the loss.  I thought the Wild’s defense struggled working the puck out of their own end almost all night.  Suter and Spurgeon were even sloppy and with Brodin out of the lineup that can’t happen if Minnesota are to have a chance.  The only bright spot was the fact we kept the Capitals from scoring on the power play.

Offensively the Wild didn’t play with enough urgency to really outwork and outbattle the Capitals for the pucks.  The Wild have been fortunate in some of their most recent games that their opponents haven’t made the Wild pay for its turnovers, but Minnesota paid dearly for those errors this evening.  Minnesota has to be better if they expect to beat an equally desperate Anaheim squad on Saturday afternoon.

C – Jordan Greenway (Team USA, Olympics) ~ the big power forward is making his presence felt as he had a goal (4 shots on goal) and 2 PIM’s in Team USA’s unfortunate late-game collapse to lose its opening game to Slovenia 3-2 in overtime.

LW – Kirill Kaprizov (Team OAR, Olympics) ~ a similar result was had by the skilled winger as Kaprizov had a goal on a wicked redirection (1 shot on goal) as Russia’s entry into the Olympic games fell 3-2 at the hands of Slovakia.