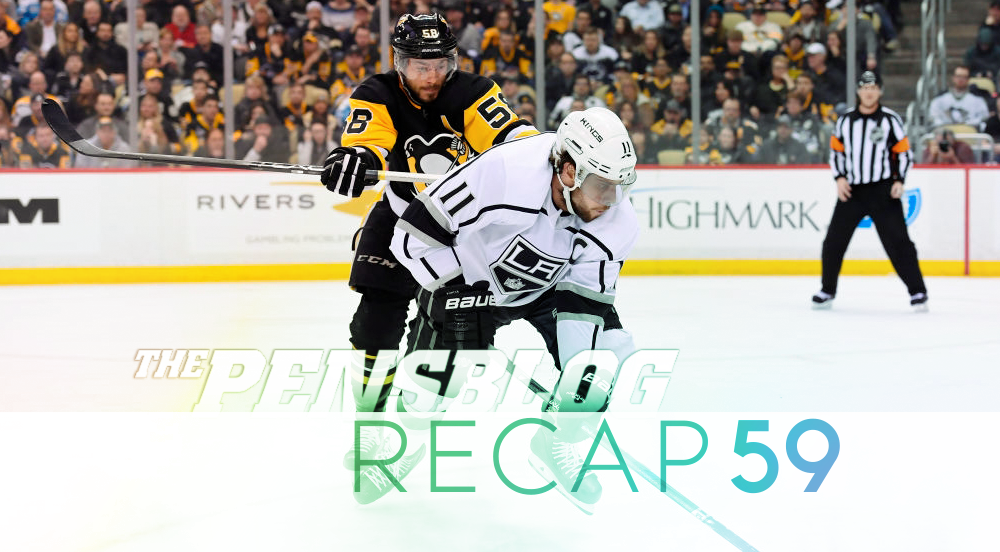 There is a trend developing with the Pittsburgh Penguins, folks.

No, it’s not that they seem to unbeatable on home ice, having won more games at home than any other team in the league, including 10 of the last 10.

That’s impressive in itself, but what’s been more remarkable, particularly the last two games, has been the absolute dismantling of their opposition in the 3rd period.  Over the course of the season, the Pens have generally been good in the final 20 minutes of games, having scored 70 3rd period goals (3rd most behind LA’s 73 and NYI’s 72) and have given up just 51 (7th best).

With spreads like that, it stands to reason that the Penguins could have and should have scored 5+ goals, but a PPG and ENG were the only things that separated these two squads on the scoreboard.

Because we had a goalie showdown on our hands.  As arbitrary and subjective as the 3 Stars of the Game awards are, they painted the picture last night.  Matt Murray was the best player on the ice.  Jon Quick was the 2nd best.  In doing so, the two netminders were forced to make 34 and 36 saves respectively, many of which were of the spectacular variety.

But then again, low scoring affairs are exactly what we’ve come to expect out of games between these two teams, so that probably should come with minimal surprise.

Looking ahead and getting into the final stretch of the season, the Penguins are finally starting to look like what we all expected them to be at this point of the season with an important stretch coming up.  Almost as if the bullshit panic and burn everything to the ground mentality in the first 2 months was wasted effort, but over the next 23+ games, we’ll really get to see where this team’s balls are.

After tonight, just two of the #Pens’ 23 remaining games will be against Western teams. Twelve of those 23 games against Metro teams.

Last night’s victory gives them a stranglehold of #2 in the Metro, just 3 points behind Washington with 2 more games played.  But in particular, this good run of form and blasting up the standings locks them into 2nd regardless of whether Philly or Jersey win the 2 games in hand they have.  Both teams sit 4 points behind the Pens with the tiebreaker currently giving the Penguins the edge.

After seeing some success with 87 against the Sens, ZAR got to stick with the Cap’n, flipping with Simon.  Got a little Phil! action with Sheahan as well as Rust getting Malkin duties.

After a first 20 minutes that saw both goalies standing on their heads, including Quick robbing Reeve’s on a breakaway and Crosby/ZAR on a 2v0 and both teams trading off PP chances, we entered the 2nd period with bagels on the board.

The Pens aforementioned first period PP carried over to the 2nd 20, and while those ~50 seconds were killed off, the league’s most lethal peep got another one just 84 seconds into the 2nd, bringing about another Quick burglary on Phil! on the doorstep.  Had to think at that point that nothing was getting behind him.

But there are some things you just cannot account for.  One of those is Ryan Reeve’s being actually good of late.  The other is the Dion Phaneuf Effect on teams.

For the second game in a row, that Gary Busey looking mafukka was out there gifting goals for the Pens.  Again, he was unable to do shit in terms of clearing the puck after some fine work by Reaves to chip it into the zone, then just kinda stood there like the trashcan he is as Reeve’s walked in and snipped Quick after Alec Martinez inexplicably gave the puck right to 75 on a piss poor clearing attempt to make the big man look like goddamn Phil!.

However, just over a minute later, the Kings would get a chance to draw level on a PP chance after Cole was sent to the box for high sticking Anze Kopitar.  It took LA just 10 seconds after the initial puck drop to equalize and give Phaneuf a little redemption, even if 1 goal doesn’t make up for being at least partially responsible for 3 against over the last 2 games.  After Phaneuf and Martinez played a little catch at the point, Phaneuf was able to sneak in behind Rust and Letang on the right side of the Pens box.  There was just enough of a seam created with Amadio preventing Rust from really getting his stick in the passing lane, allowing Kempe to through a cross-ice feed through to Phaneuf to get a bit of luck with a Letang deflection through Murr to give him his first as a King.

Both teams would go on to trade off 2nd period penalties in the second half of the period, but to no avail until the Pens were afforded the final powerplay of the game 3:45 into the 3rd period with Brown throwing the puck over the glass.

LA had to feel like they were close to surviving it, but with about 21 seconds left on the man-advantage, Letang would get credit for the GWG.  With the Pens 2nd unit working the perimeter, it allowed Aston-Reese and Simon to get in Letang’s shooting lane to screen Quick.  The 3 Kings PKers down low did that same thing, giving Letang all the time and space in the world to wind one up and find a piece of someone or something in front.

UPDATE (11:20 AM): Looked like the puck may have deflected off a LAK player and not ZAR, so give Letang 5G on the year now.

Penguins have announced that the Penguins' second goal last night goes to Kris Letang and not Zach Aston-Reese.

The flightless ones would keep the pressure on the Kings in search of that killer blow, but it would take a vacant net to finally grab it as Gene and Rust were the ones entrusted to see the game out with 87 between them.  Great work from Gene to drive straight to the corner and stop up to wait for reinforcements, but even better from Rust to beat Muzzin to the loose puck and eventually have it work it self to 87 and 71 for the gimme.

The Penguanos finish up their 3 game homestand as they play host to the Leaves on Saturday night before embarking on a 3 game road trip that starts Sunday in Columbus and ends with a Friday/Saturday back to back in Carolina and Sunrise.  LGP.