Your Morning Dump... Where no All Stars are writing Boston off 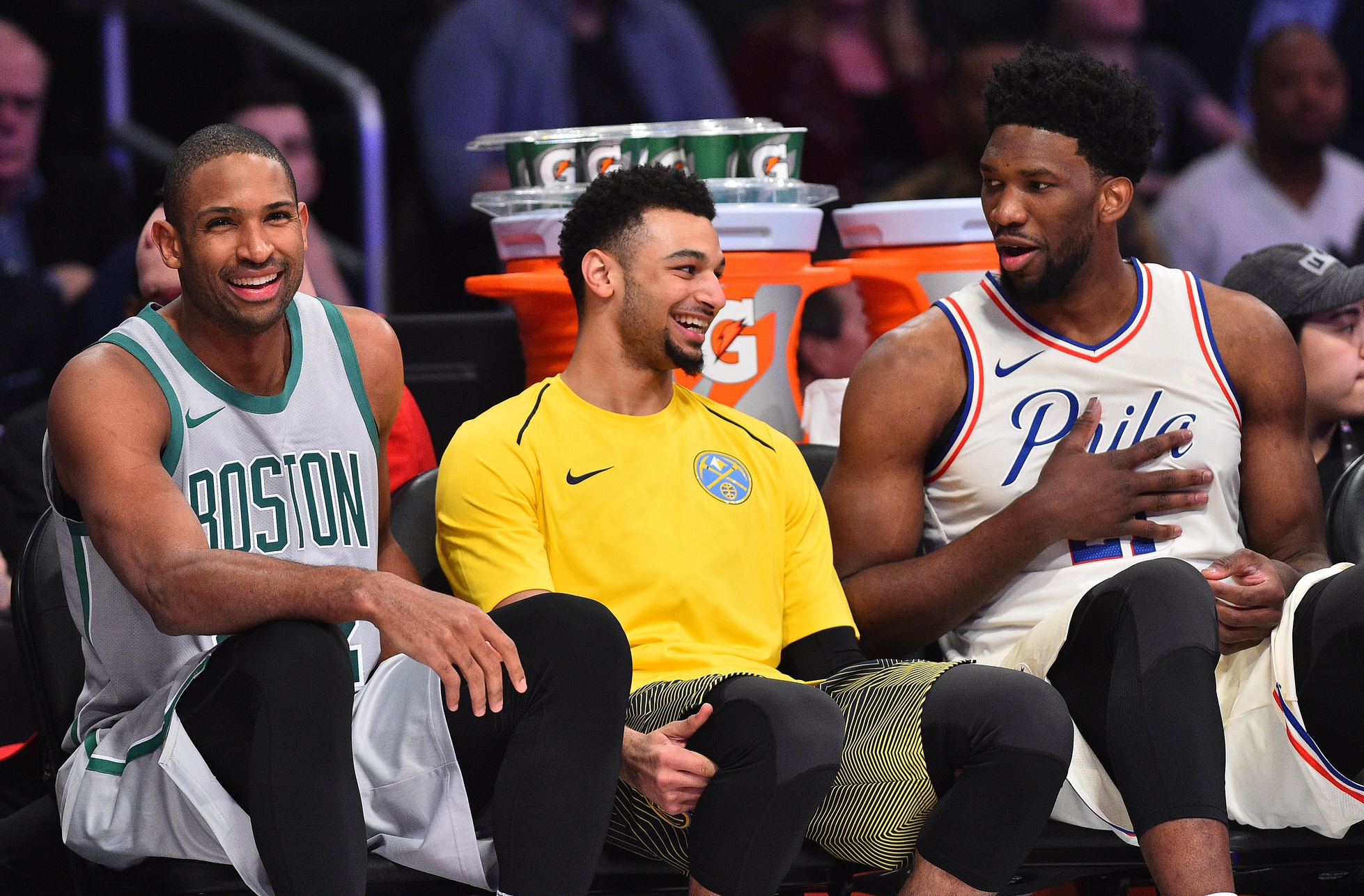 Your Morning Dump... Where no All Stars are writing Boston off

“It’s a long year,” Kevin Durant said yesterday. “Kyrie (Irving) is asked to do a lot out there to score for that team, and as a point guard that can be tiring. But they’ve got a lot of young guys that are still figuring out their way.

[…] Then Draymond dug in, saying, “I think they went from going into the season with Kyrie and Gordon (Hayward) and Al kind of expected to be really good. With young guys like Jaylen, Jayson Tatum, they were expected to be really good. Then Gordon went down, and then there were kind of no expectations for them, and they completely outplayed that. So then it’s a different thing. All of a sudden, everyone is gunning for you and that takes some adjusting to.

“So I think they’re just adjusting to it and they’ll be fine. Everyone hits that rough patch in the season, and I think that’s what they’re going through right now.”

[…]Added Steph Curry: “There’s ups and downs. You have good stretches; you have bad stretches. For different reasons — Boston being kind of a brand new team that had a great start to the season, has hit a rough patch, but I’m sure will be better because of it.

Those are a select few quotes and there are many more in the piece so I highly suggest you click on over to the Herald to read them all.

You get the point, though.

We have a strong tendency to zoom so far into a season that we lose sight of the bigger picture. The last few games have been very frustrating and the Celtics don’t look like themselves, but players around the league understand that rough patches happen. There is mental and physical fatigue and sometimes that manifests itself as a sluggish losing streak.

A lot of the frustration comes from our own expectations of the team. We project our own excitement for a “big” game onto the players and then get upset when they don’t seem to mirror our own enthusiasm. We look at the schedule and think “this is a chance to send a message” and build a stretch of games up to be something bigger than the players might think.

Of course, that’s the beauty of being a fan. Basketball is an 82-episode drama and sometimes those characters don’t do what we want them to do. No good show will just progress exactly how you expect. People will stop watching.

The NBA’s daily performances are filled with human error and unexpected twists. We project our own emotions where they may not belong and we get surprised, positively and negatively, by the results. This time around, we got blindsided by a team that did not match any of our expectations.

But there is a lot of time left, and everyone around the league understands that. There is ample opportunity to put these struggles in the past. No one in the league is writing off the Celtics. Anyone who is beginning to now does so at his or her own peril.

“I think the accessibility from the outside view will probably seem as though it’s a little more,” he said. “Internally, where I am in my profession and where it’s come with has been a lot, it’s been a true adjustment for me because as a kid you want it but when you get it, this is it. This is what everybody kind of is so crazy about. When I have a great chance to be authentic, being in front of people and showcase some of the talents that I’ve had for a while, and I’m not saying I’m the best actor but I’ve always wanted to act, always wanted to be a creator and influencer. But for me, I always wanted to necessarily not put my name on it. I’ve always had that attitude since I was kid.

“I don’t necessarily want to be in the front of everyone. I love being in the back just observing. I feel like that’s the best way to learn. For me now it’s great for my family. I think about the multiple legacies I want to leave before I’m done playing basketball, before I’m done on this Earth. Uncle Drew is part of that lineage now. I just love putting a great stamp of something I can be proud of and then leaving out of it with a great feeling about it.”

Globe: Kyrie Irving is just being himself

Kyrie is promoting his new movie (side note: The trailer looks just ridiculous enough that it might be an amusing movie) and with it kind of opening up about himself a little.

Some people call him weird… others call him brilliant. Wherever you fall on that spectrum, we can all agree that he’s a unique cat. He’s been talking a lot this weekend, and this piece on him and his relationship with his dad is pretty good.

Irving was 4 when his mother Elizabeth died from a sudden illness. Drederick Irving, who had played professionally in Australia, moved the family back to the New York area, took a job on Wall Street, focused on raising Kyrie and his older sister Asia, and began tracing his old basketball roots.

Kyrie Irving came along and shot on the side as his father played in pickup games. When an extra player was needed, Dred called over his son.

“They were in a rec complex in the South Bronx — Ky was going into the seventh grade — and he was off on the side shooting during the game,” Spinelli said. “Dred says, ‘Come on, Ky.’ And he goes in against an older, very good player, and Ky made a couple of his vintage moves. He embarrassed one older guy, who then tried to go back at him.

“He used that hesitation, went through his legs, around his back, did a hard crossover. Then he pulled up for a jumper. When the game was over we went out to dinner. I told Dred that the best player on that floor was Ky. Things are going to happen quickly for him.”

There’s a lot in this piece... I highly recommend it.

Here’s Al at the skills competition….

Here is Al Horford's Skills Challenge heat with Joel Embiid. The 3-point shot – which he has made at a 43.6% rate this season – was his kryptonite. pic.twitter.com/bsUCpM0dwU

Nice pace… nice job. Completed all the skills in a good time… and then he got to sit down and not put tax himself any more. I like how it all went down.

Afterwards, he retired from the event.

“It happens,” he said, “but me and him were having a good talk before, so it was fun.”

[…] Horford said that he can now scratch the Skills Challenge off of his bucket list and that he will not participate in the event again, but he noted that he enjoyed the experience. He also joked that had he run a pick-and-pop and caught a pass from teammate and co-All-Star Kyrie Irving, he would have drained his first attempt from 3-point range.

I don’t take this stuff too seriously and the skills competition is ok… but they can’t have guys winning it when they can’t make the pass. This is a competition that showcases dribbling, passing, and shooting skills. If you can’t complete one of the skills… then you shouldn’t win.

If you’re going to just let guys miss passes, then they should time the event and each missed pass becomes a deduction off your final time.

I have a couple of other ideas that I tweeted out last night.

Or create a rack on an incline on front of the player so he can grab the ball and go right up into a natural shooting motion rather than reach to the side? Just grab the ball in front of you, shoot, next ball is cued

I think it’d be fun to have had Steph Curry throwing passes to Klay Thompson so he can catch and shoot in rhythm. Tack on a few extra seconds and have guys go to their spots with the teammate right in the middle and let the teammate pull balls out of a bin or off the rack. It’s much more natural that way and the teammate element is a fun twist.

Oh, and don’t give me “he could make a bad pass.” An NBA player is perfectly capable of tossing a chest pass to a guy on the perimeter. If he can’t catch and shoot, then that’s his own fault.

As for the dunk contest… HORSE would eliminate people getting two and three cracks at a dunk. If Oladipo wants to wear the Black Panther mask and he misses… he can try it again sometime down the line if he has the chance.

Maybe five dunks is too many and you shorten it to “DUNK”… a guy still has to whip off at least four FIRE dunks. We eliminate DJ Khaled and other stupid judges, and you have the possibility or two guys with D-U-N whipping off a frenzy of dunks and matching each other time and time again to build up the suspense.

I think these things can make it all more fun. I think the event has gotten a little stale and this could be a fun way to get people more interested again.

Globe: Ryan: The 3-pointer has taken over the NBA  |  Antoine Walker wonders what life would have been like had he stayed with the Celtics  |  LeBron James fires back at Laura Ingraham