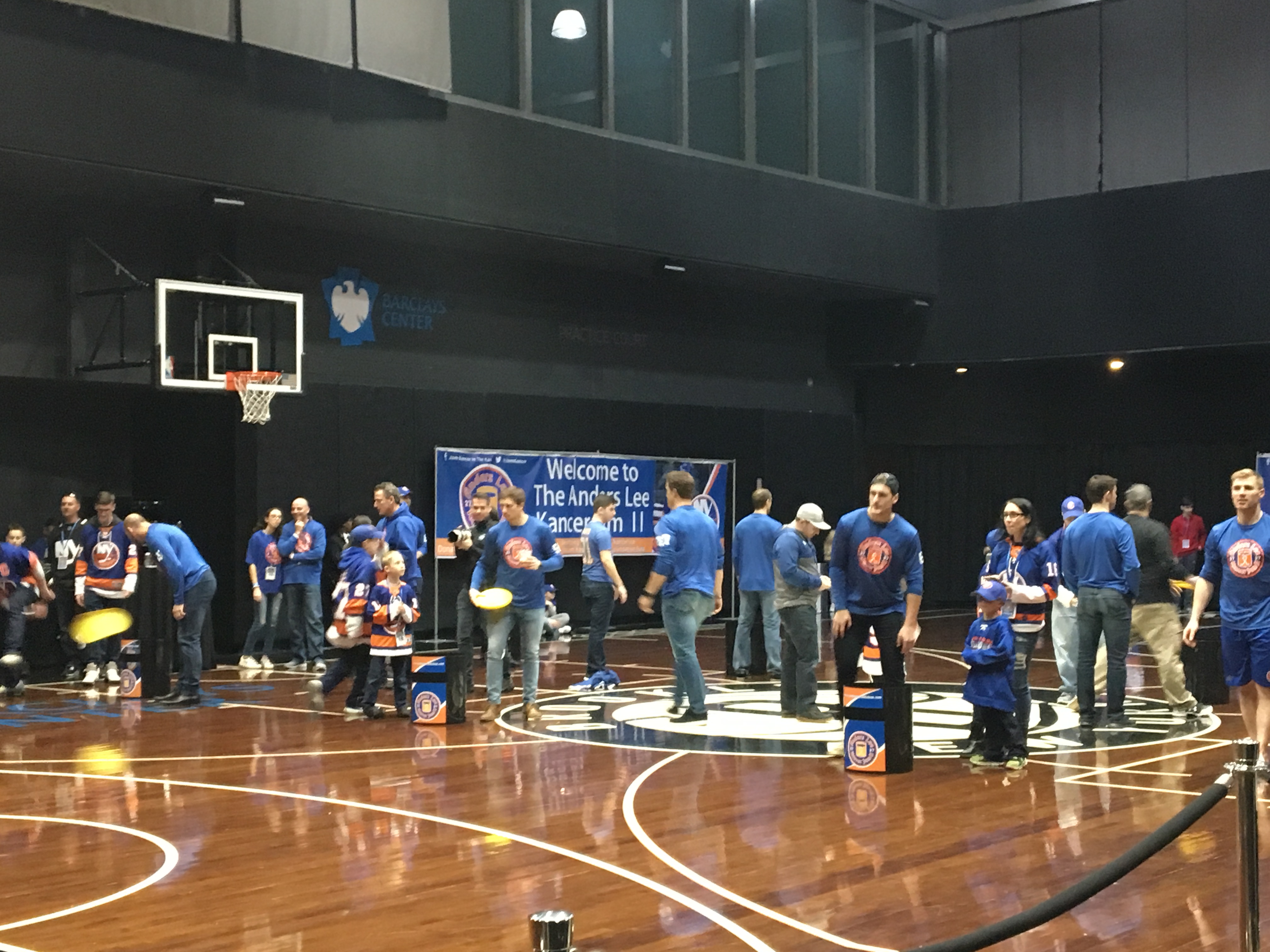 NEW YORK — The music blared over the loudspeakers and the smiles were seen across the room in the gymnasium at the Barclay Center.

The Islanders were only a few hours removed from a frustrating loss to the Minnesota Wild, but they were fighting a much more important battle Monday afternoon and Anders Lee was leading the charge. For the second year in a row, Lee hosted his Kancer Jam, a Kan Jam tournament to raise money for research to cure pediatric cancer.

“It really so awesome,” Lee said. “The Islanders community, the guys in the room and the organization being able to have the support that we’ve had. To be able to put on an event like this is special.”

The #Isles are joining together after today's game for a greater cause. Helping @leeberr09 as he raises money and awareness for pediatric cancer patients at his @jamkancer event. pic.twitter.com/SmYeeGwLgK

The event was Lee’s brainchild last season and raised $90,000 for Cohen Children’s Medical Center during the first-ever Kancer Jam at Barclays Center. The idea originated after Lee had seen a video of 16-year-old Fenov Pierre-Louis speaking at a Jam Kancer in the Kan Foundation event

Pierre-Louis had Stage IV neuroblastoma and has been battling cancer since he was 9 years old. The two have since become friends and Pierre-Louis has been on hand for both events put together by Lee.

“It’s inspiring to me to see so many people coming together for a noble cause,” Pierre-Louis said, via the Islanders website. “It means so much to me as a cancer survivor myself, to see all these people coming together, raising money and not only that, but smiling and having fun at the same time.”

The tournament format remained the same as last year, with 32 teams made up of fans who raised money and players. Nick Leddy and his teammate Nick took home the title in this year’s tournament, edging out John Tavares and his teammate in the final game of the night.

“It’s fun. Obviously, you come to support a great cause,” Brock Nelson said. “To come out here, to give back and mingle with a lot of people who have helped that cause it’s fun.”

The afternoon was not only an opportunity for the Lee and his teammates to help a good cause, it was also a chance for them to mingle with their fans in a unique setting. Unlike some team events, the fans and players had the chance to spend a more significant amount of time interacting with one another.

And it was an event that everyone could be a part of. Islanders co-owner Jon Ledecky made an appearance, as he did last year as well, Islanders alumni Bryan Trottier was there, and the players’ wives, girlfriends and families were also on hand.

“The thing I look forward to the most is you just get this interaction with the fans,” Josh Bailey said. “This is the perfect way to do it. I think everyone is out here just having a good time and no one is taking it too seriously. Really it’s just putting in that time with the fans and people who donated their money and time to come out here.”

This year’s Kancer Jam gained some increased attention last week when fans, who had raised money through GoFundMe for a “Fire Garth Snow” billboard in Brooklyn, wanted to donate the excess funds to Lee’s charity event. The Islanders forward declined to accept the funds via social media, which drew the attention of the local New York media.

Your 2018 Anders Lee Kancer Jam champions are @ledpipe08 and his teammate Nick!

The success of Lee’s Kancer Jam inspired a crosstown rival to host one of his own. Kevin Shattenkirk is hosting a Kancer Jam of his own next weekend and had reached out to Lee on twitter to ask for advice.

“I think it’s really cool,” Lee said about the idea spreading to another team. “It is a simple event at heart. It’s just a simple tournament and for them to pick it up and for Kevin to pick it up and run with it is awesome. I hope his event does really well and it’s exciting to see. It brings communities together.”

So could we see an Islanders-Rangers Kan Jam even in the future?

“I’m sure there’s going to be one,” Lee responded with a smile. “I think we’ll demand it to be out on the Island that’s for sure. We’ll host it out there somewhere.”