Your Morning Dump... Where we give Jaylen Brown the love he deserves 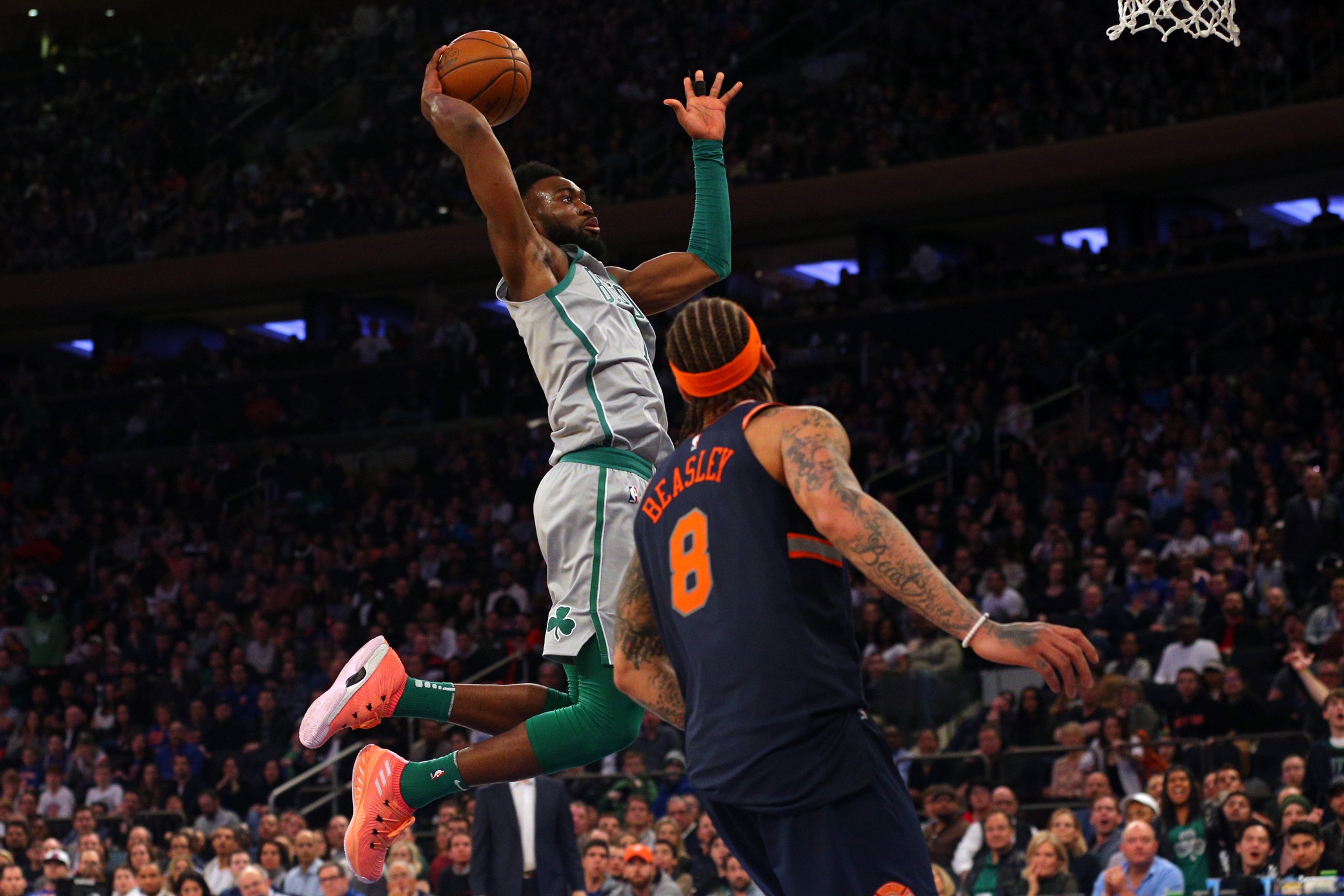 Your Morning Dump... Where we give Jaylen Brown the love he deserves

We’ll end with Brown, who posted 24 points on 10-for-17 shooting. Brown’s development is coming in steps, and watching him climb throughout the season has been endlessly interesting. He immediately started shooting pretty well from behind the arc, and that has largely continued, with a drop-off in January that mirrored the rest of the team’s drop-off. But he hasn’t stopped there — the second-year wing is started to show a lot more control in the paint, getting to his spots and elevating for shots over the defense.

And, of course, there are the dunks — Brown has started looking to bring the hammer down on anyone and everyone when he gets a step into the paint.

That kind of two-way excellence in a second-year player — particularly from a second-year player with Brown’s physical attributes — bodes extremely well for the future. However the Celtics look to build their team going forward, one has to assume Brown’s combination of skills make him the type of player a team would be very hesitant to give up.

“This is one of my favorite places to play. Just the aroma, the smoke. Every time I play here at Madison Square Garden, there’s just a stoic type of feel here,” he said. “The history, the atmosphere is fantastic. It’s amazing to come out and there’s like a misty, mystified court. The crowd is cheering. It’s almost like you’re playing in a throwback game 20 years ago.”

Kyrie Irving is the clear lead story out of last night’s game. He nearly dropped a triple double and spent a lot of the night toying with Knicks defenders.

But along the way, Jaylen Brown had himself a very nice game as well. He was aggressive and efficient, shooting 59% on his way to a 24 point night. He also only got 36 touches, 7th on the team last night, so he definitely made the most of them.

What got into Jaylen last night? Is it just loving to play at MSG? Or is there more to it… like a renewed energy he discusses at the end of his behind the scenes All Star video for The Undefeated.

After the Rising Stars game and in Malibu he talks about needing a mental break. That’s not something people consider a lot when they think about basketball but the grind of the season can definitely take a toll on people mentally. When we think about a slump heading into the All Star break, we think “oh these guys are just tired.” We rarely consider how mentally fried these guys can get.

Just watching him on the court last night it looks like the break re-energized him. Whatever it is, it was nice to see.

By the way I found it very interesting he said Marco Belinelli is his least favorite person to guard. Just like everything else, Jaylen gives a thoughtful answer as to why.

Page 2: Zaza is a dirty punk and everyone (including Kyrie) knows it

Paul George took a similar approach to Westbrook, though he included some more color.

“I’ll take the Russ approach to this. Did you see it?…You know Zaza,” he said. “You know his history. You know nobody pushed him. He aimed where he was gonna fall. That’s Zaza making a Zaza play. He’s on the end of hurting a lot of guys.”

Let’s look at the replay. Notice how there’s minimal contact with Pachulia, how slowly he falls, and how he chooses his path down.

What Pachulia is great at is achieving plausible deniability… where he can say “hey, I just lost my balance and look, I tried to stop myself but I slipped!”

That, of course, is all bullshit. Kyrie knows it.

Kyrie Irving has thoughts on Pachulia falling on Westbrook’s leg: “that s*** is ridiculous” pic.twitter.com/fPJayhbzT4

It is ridiculous, Kyrie. Pachulia’s only skill now is intentionally hurting opposing stars. He’s barely useful as a player anymore.

Steve Kerr fights for what’s morally right on a nearly daily basis. This play isn’t basketball, this is an intent to injure and it’s not his first time. I’m all for in-game trash talk… even some elbows and grabbing to get guys off their game… but intent to injure crosses a line and Kerr needs to address this immediately. He loses a lot of the moral high ground if he willfully employs and deploys a goon who tries to hurt other players whenever the opportunity presents itself.

The league needs to look at this too. How much longer are they going to let Zaza try to take out players? Who’s next?

Marcus Smart did not attempt a 3-pointer tonight for the first time all season.

Smart has returned from his fight with a picture frame to reinvigorate the Celtics, shooting 9-14 (64%) over two games. Last night he took good shots (INCLUDING TWO DUNKS!) and got to the line without launching a single 3 (HE EVEN PASSED UP AN END OF HALF HEAVE!)… which, as the tweet says, is a complete aberration.

He did this all while providing his signature defense. Look how many different players he guarded in this game.

Did nearly ruining the end of his season snap some sense in to Smart? Whatever it is, let’s keep doing it because, as suggested in yesterday morning’s dump and after the game last night, Smart is kind of important.

“Well, yeah. It’s just the appreciation of Marcus Smart there,” Irving said. “Just implementing him, and him just putting his stamp and identity on our team as well, it just makes a lot of other guys’ jobs a lot easier because he covers up a lot of our mistakes as well as playing with unbelievable awareness on both ends of the floor. He understands spacing. He understands the little things that matter in putting a full 48-minute game together.”

Funny thing is (maybe not so funny for Smart) is that while this really highlights his value to the Celtics, it’s probably not going to increase how much money he gets because there are so few teams with money to spend. This all could just lead to the Celtics keeping a really important guy off the bench at a bit of a discounted price.

Globe: Aron Baynes sat out against Knicks because of sprained elbow  |  Garden party for Kyrie Irving as Celtics hold off Knicks  |  Athletes shouldn’t just ‘shut up and dribble’  |  James Harden focused on winning a championship