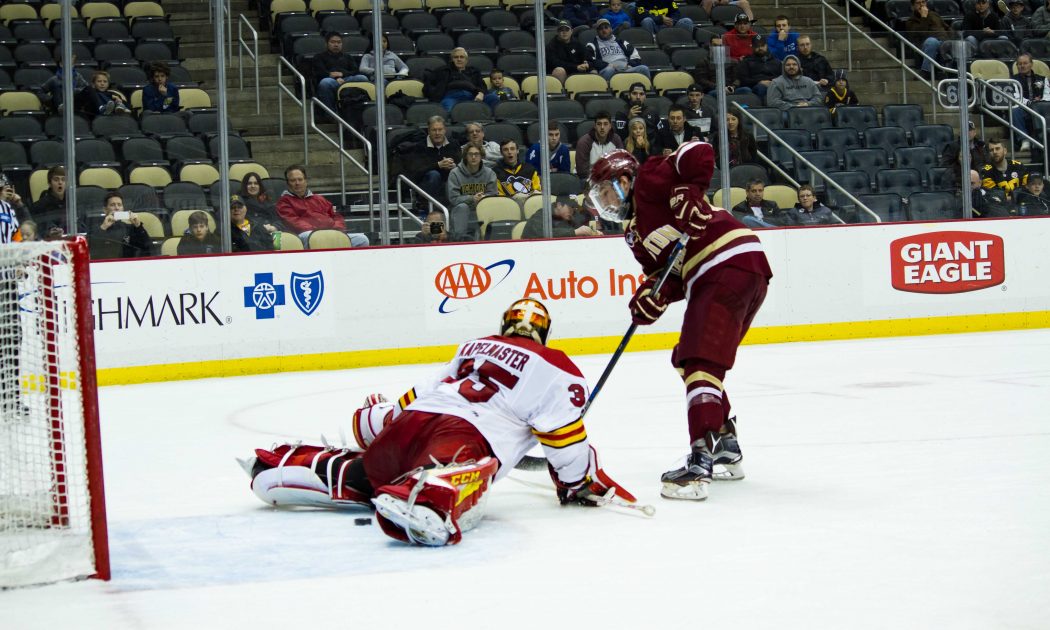 It came and went with only one trade to report on for the Edmonton Oilers. On the third deadline day of Peter Chiarelli’s tenure with the Oilers, the veteran GM traded away pending UFA forward Patrick Maroon to the New Jersey Devils. In exchange, Edmonton acquired a 3rd round pick in the 2019 NHL draft and prospect forward J.D. Dudek. Dudek is currently a junior at Boston College of the NCAA.

This comes after a weekend that saw Edmonton deal Brandon Davidson to the New York Islanders for a 3rd round pick in 2019, and Mark Letestu to Nashville for Pontus Aberg, who is slated to join the team for tomorrow’s tilt in San Jose against the Sharks and new forward Evander Kane.

This was, to put it in frank terms, a very underwhelming return for a player who scored 27 goals a year ago and had another 14 this season. The rumors in the lead-up to the deadline had Edmonton hoping for a late first round pick and had as many as seven teams bidding on the player. This return is extremely disappointing when you look back at the verbal leading up to today.

That said, it shouldn’t come as much of a surprise when you look around the rest of the NHL. This was a buyer’s market, there were a number of teams selling and not a lot of teams buying. With Boston (Rick Nash), Tampa Bay (JT Miller), Winnipeg (Paul Stastny), St. Louis (selling) and Columbus (Thomas Vanek) all filing their needs elsewhere, Chiarelli was left with nearly no options.

Disappointingly, he had to take the best offer, and this was it. The Edmonton GM even stopped short of saying he was disappointed with the return at his post-deadline press conference. If you want to get on Chiarelli here, you should be getting on him for waiting too long and the market essentially crumbling beneath him.

The pick gives Edmonton three choices in the 3rd round of the 2019 selection process, meaning that Edmonton will have some ammo to buy this summer or at the deadline next year should they right the ship this summer.

As for Dudek, he leaves a lot to be desired as a prospect. The New Hampshire native is currently a junior right winger for Boston College has registered 6-11-17 in 33 games this season. Dudek’s regular season is over, as Boston College embarks on the Hockey East playoffs next weekend after an opening round bye this week.

Here’s a scouting report on Dudek from Dobber Prospects:

Dudek has promise as a hockey-smart offensive threat with a solid work ethic. In a few years may develop as a contributing member of a scoring line at the NHL level. While not overly physical, Dudek is adept at protecting and fighting for the puck along the boards and in corners.

From March 2017: His increased playing time, including a move to the Eagles’ point on the power play resulting in two PP goals vs. Vermont in the quarterfinals, show the program’s faith in him and should lead to an even greater role in 2017-18.

Dudek could turn pro after the season and sign with the Oilers, but odds are the club will let him return to Chestnut Hill next season for his senior year with the Eagles. He’s not a game breaking prospect and in my viewings hasn’t looked ready to take the next step to pro hockey.

Quick note on Maroon before moving on, I’m going to miss him in an Oiler uniform. He played a style that everyone could get behind and was a key piece of the best Oilers season I’ve witnessed. He played hard, loved Edmonton and was loved by just about everyone who rooted for this team. It was fun having him on the club, and I wish him the best moving forward.

I also wouldn’t be shocked to see him circle back and re-sign with the Oilers come July 1st. I always thought this was a possibility, but am now convinced it could happen after listening to him speak today. Elliotte Friedman of Sportsnet had the same observation on Twitter.

Pat Maroon in SJ says he may circle back to EDM on July 1: "Nothing but good things to say about this organization."

IF the contract is right, and there is a reason ‘if’ is in all caps, then I’d be more than okay with Maroon coming back in the summer. That said, even if he does return, the Oilers will need to find a speedy left winger to play with Connor McDavid moving forward.

Overall, it was a quiet and disappointing day for Oiler fans. That said, it wasn’t a surprising outcome. Edmonton moved Mark Letestu on Sunday and Brandon Davidson on Saturday, so the options for rentals were minimal from this club. We knew Patrick Maroon would be moved and he was, although for a disappointingly low return.

I was a little surprised that Mike Cammalleri didn’t get dealt, but Chiarelli noted that there wasn’t a ton of interest in him and that he really wasn’t shopping him. I wouldn’t be stunned if Cammalleri got a veteran’s minimum contract this summer to stick around as depth. The club could certainly do worse than a veteran that can help a bit and wants to be here.

I thought Chiarelli could have gotten more for Maroon, but judging by what I heard he misread the market. Now, the focus will turn to the final 20 games where the Oilers hope to show some progress and finish strong. Me? I’d like to see the team win twelve of its final 20 games. That would represent a strong finish in my mind.