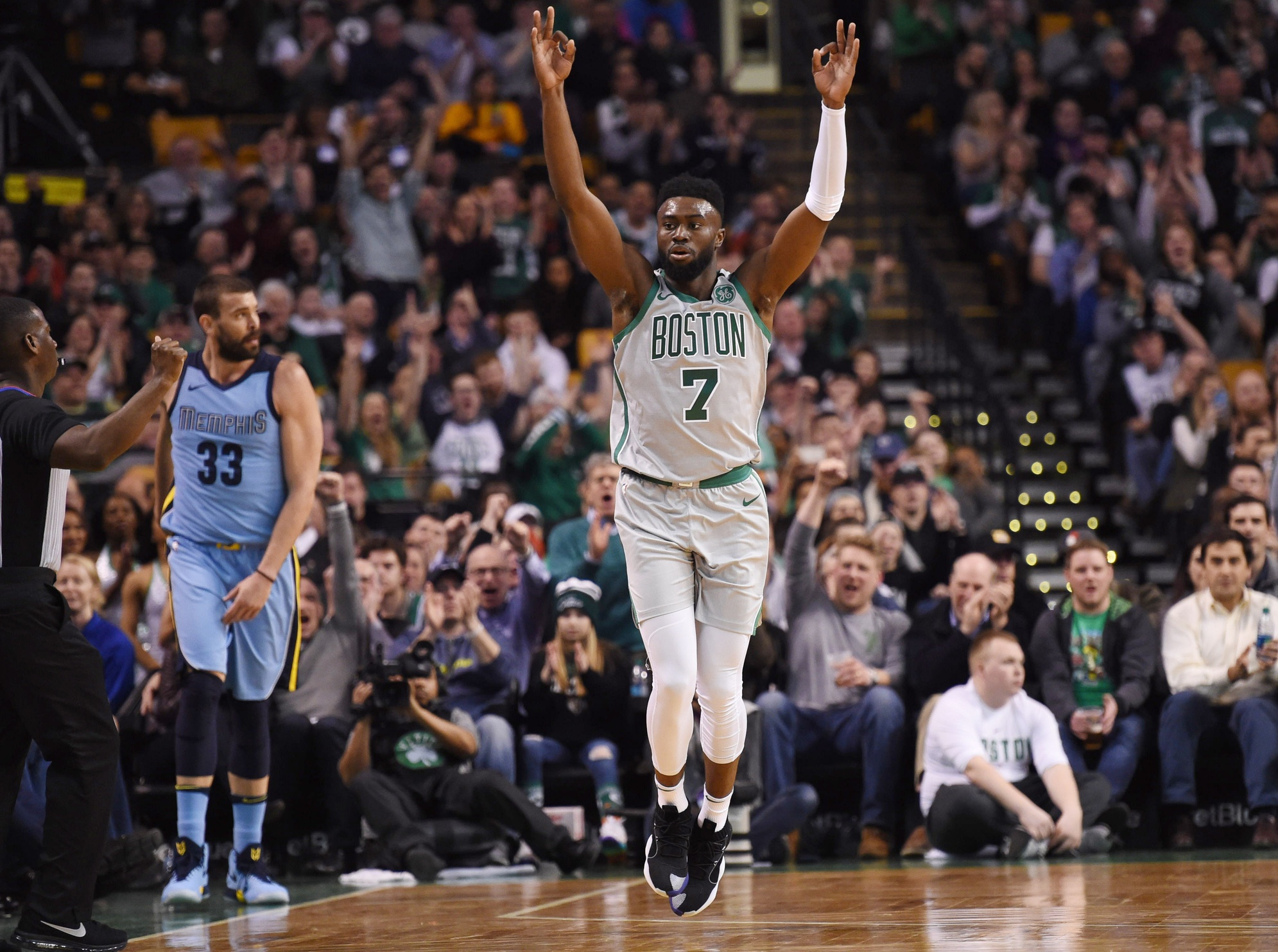 With his hands in the air calling for louder cheers, Marcus Smart bellowed toward the Boston Celtics’ home crowd.

And why not? His all-bench unit was busting open a game against the Memphis Grizzlies. Semi Ojeleye had just jetted into the passing lane for a steal, then set up Terry Rozier for a high-flying dunk. It was just the second quarter, but the Celtics were well on their way to a 109-98 win, their third straight after a pre-All Star break funk.

Do the Grizzlies count as top competition? No. Absolutely not. But the Celtics handled their business Monday night, drilling eight 3-pointers in the first quarter, dominating the second quarter thanks to the aforementioned all-bench lineup, and cruising to a mature victory. Kyrie Irving dazzled with 25 points, including 21 before halftime; Terry Rozier made his first four shots en route to 15 points off the bench; and the Celtics pounded the Grizzlies almost from the start.

“Overall, this team has been pretty darn good at bringing it,” Celtics coach Brad Stevens said, “being focused, doing the right things. But without question we were not as good post-London, prior to the All-Star break (a 6-9 stretch), for whatever reason.

“So we’re just trying to get a little bit better. I feel like our offense has grown quite a bit even though our second half wasn’t great tonight. Defensively, we were OK for the majority of the night. But we were great in the second quarter.”

The competition hasn’t exactly been on par with the gauntlet of Eastern Conference contenders the Celtics matched up with before the break. The Detroit Pistons are drifting on the outskirts of the Eastern Conference playoff picture, while the New York Knicks and Grizzlies are playing for draft lottery balls. But with mostly strong efforts in all three victories, they are three wins the Celtics will happily bank with 20 games left in the regular season.

“It’s our focus,” said Celtics All-Star Kyrie Irving, who scored 25 points in 25 minutes on Monday. “Knowing what we’re trying to get ready for.”

After a couple of bumpy wins against the Pistons & the Knicks, the Celtics got good and healthy last night, trouncing (don’t let the final score fool you) the Tyreke-less Grizzlies.

The C’s stumbled into the All Star break looking like Jackie Gleason at this point in The Hustler:

But that week off really seems to have done the trick. Now they’re looking more like Jackie Gleason a few minutes later–after he’s stepped out for a moment–and right before he finishes off Paul Newman:

We all thought that the Celtics would kind of get back in the groove after the London trip–and I think the players themselves kind of bought into that, and didn’t use the downtime appropriately; they came back, looked messy, Marcus decided to simultaneously impersonate Keith Moon and Pete Townshend, and then they really hit the skids.

They’re back now–and, while there’s bound to be one or two bumps along the way, I think they’re going to finish the season really strong.

Page 2: Where Isaiah Thomas thinks the Cavs were in panic mode

“I didn’t think they would pull the trigger that fast, 15 games,” Thomas told ESPN. “But again, it’s a business. And the Cavs were, I mean, they were in panic mode. We were losing—a lot. And I think they felt like they needed to make a move, and they, they basically cleared house.”

Thomas, who missed most of the season as he recovered from a hip injury, added that with him trying to get acclimated to the team in the middle of the season and the amount of new players on the roster, it was going to take time for the Cavaliers to figure it out.

“People don’t put in there that we had eight or nine new players,” Thomas told ESPN. “So it was basically a brand new team. … I’m in a new system. New team, new coach, new players. And then I’ve been off for seven months. So I got to get—individually, I got to for the most part get my rhythm back, get my timing back.”

IT’s about right. That wholesale change in the Cavs roster was as crazy of a midseason maneuver as I’ve ever seen. I mean, that was like deciding to rotate the tires on your car–while doing 75 on the interstate (or 80 in Montana, South Dakota and Texas).

Of course we all know that the Cavs gamble really paid off!

When people talk about LeBron being ‘the GOAT’, I wonder what their basis is for ignoring the nonstop chaos that follows him from one team to another.

Because, to me, at some point, someone has to bring that up. I mean, this isn’t tennis or golf. This is still–individual showmanship notwithstanding–a team game. And LeBron has never been a very good team player, and as he moves farther into the Norma Desmond phase of his career, he seems likely to become an even worse one.

Knicks fans can only dream Irving will bring his talents to the Garden when he’s a free agent in 2019 and the Knicks next have cap space. Irving put the Knicks (24-37) on his short wish list over the summer and said during All-Star weekend he told Kristaps Porzingis he’d “love to play with a big like you.”

Chuck touched on this article yesterday, but it really does merit another look, and some detailed analysis by Porky Pig and Daffy Duck.

Let’s turn to Porky and see if he has any additional thoughts on the subject:

NBC Sports: C’s back to playing elite D | C’s stay hot and make it three straight | Smart makes the Celtics great again | Brown: We are one of the best defensive teams in the league