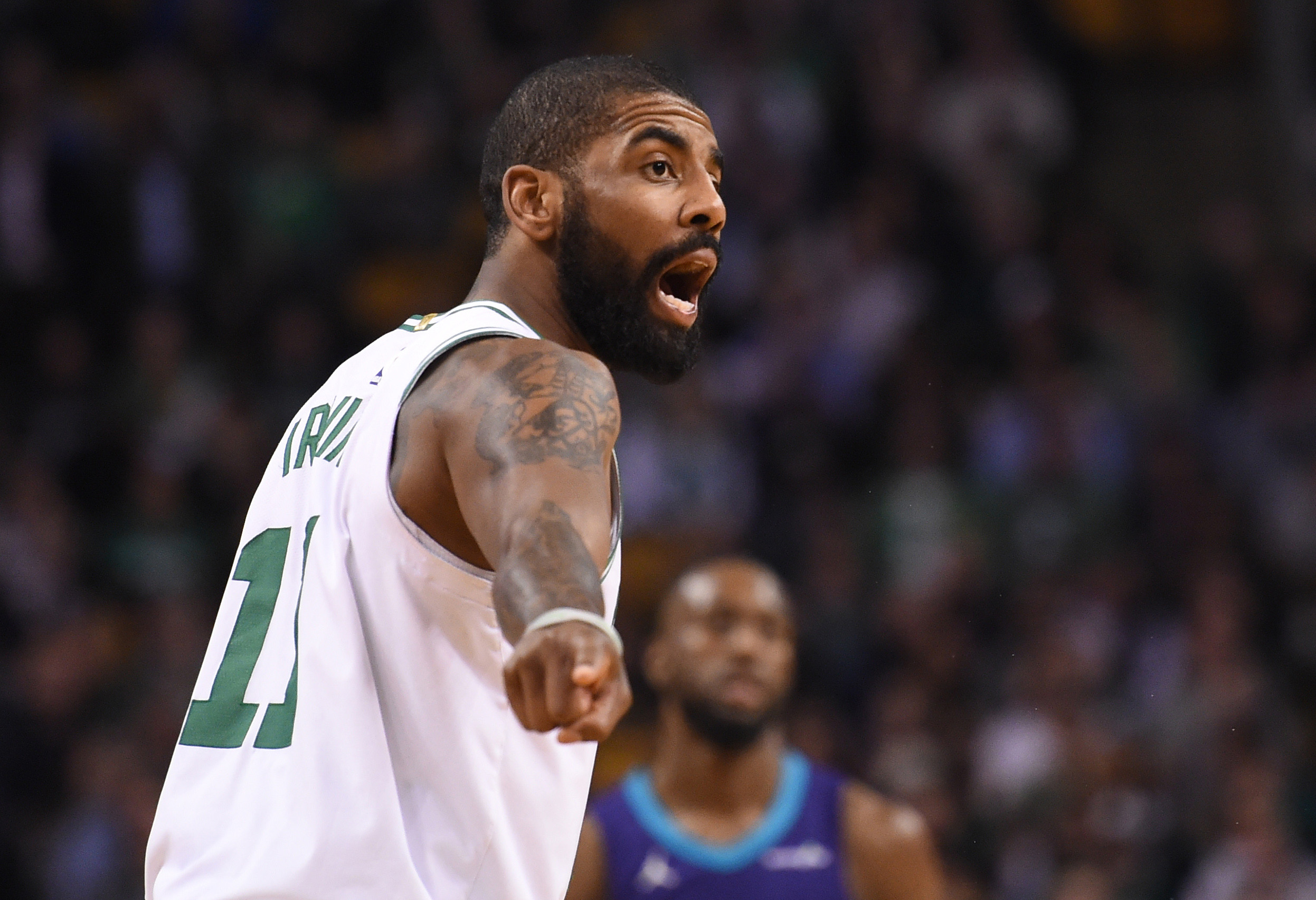 The Celtics and Hornets each entered tonight’s game bound to end or extend a streak, as the Hornets had rattled off five wins in a row vs. the Celtics three in a row heading into Wednesday night.

The two teams each shot the lights out over the course of the game, but the Celtics held the lead for the full forty-eight minutes, and Boston ultimately pulled away in the second half to extend their win streak to four. The Celtics had seven players score in double figures and were led, once again, by Kyrie Irving’s 34 points scored in just 24 minutes of game-time due to the commanding lead for Boston. Final Score: 134-106

It became clear that we were in for a shootout around four minutes in, when the Celtics had already scored 15 points. Kyrie came out guns blazing and made 3/4 within the first five minutes of the game and finished the half with 24 points on 10/14 shooting from the field. Not only was he wet from deep but he consistently fed off of switches to Frank Kaminsky and the like, which was as entertaining as it sounds.

In addition to Irving, Aron Baynes took advantage of the seemingly wide open hoop and porous opposing defense tonight as he finished 5/5 from the field for a quick 10 points at half. He defended admirably against Dwight Howard, too; though Howard finished with 15 points through two quarters himself (and at one point drove into Baynes’ chest so hard his groan was audible).

Al Horford, unfortunately, was on the other side of the spectrum to start the game tonight. Horford was a non-factor through out the first half and finished with 0 points on just two attempts from the field. On the plus side, though, those that watch Al night in and night out knew this wasn’t going to last much longer.

The Celtics bench deserve credit for the great start to tonight’s game, too. They were led first by an aggressive Greg Monroe, who consistently used his patented spin move to maneuver himself to the rim for an easy bucket. At one point the Celtics fed Monroe FOUR STRAIGHT TIMES, as the Hornets refused to adjust or get Hernangomez any help. When the Celtics fed Monroe for the fourth time in the same spot against the same opponent, Hernangomez became so frustrated he kicked the ball out of bounds before he could pull the spin move.

The tweet below isn’t that video, but it’s a good example of how Monroe succeeded tonight. It was officially his coming out party.

The Moose is loose! pic.twitter.com/KZ3wpfdNxh

Personally, I wouldn’t want an opposing player to feast against one of my own, but I’m just a blogger so what do I know.

In hindsight the kickball was a good idea anyway, since the Celts then in-bounded to Marcus Morris who – you guessed it! – shot the ball right away and bricked the shot. That was just the beginning for Mook, though. It wound up being one of Morris’ finest halves of the season when he finished the half 4/7 for 9 points, along with 4 rebounds and 2 assists. You know the entire team is locked in when Mook is on the floor scraping up rebounds and displaying the wherewithal to call a timeout instead of getting called for a travel.

In total the Celtics bench had scored 23 points and played a vital role in extending the lead for the Celtics at key moments. On the other hand, the contrarians out there will be happy to hear that Boston was straight up absent when it came to paint presence in the half. They scored exactly half as much as they gave up when the Magic scored 36 (THIRTY SIX!) points and C’s only scored 18 themselves through two quarters.

The Hornets were kept afloat with success in the paint and Kemba Walker scoring. He finished a perfect 8/8 from the field, including four shots from deep, to finish with 21 points. At this point we had a flat out duel between Walker and Irving heading into the third quarter, with the Celtics leading by just eight points, 67-59.

After outscoring the hornets by 6 and then 2, respectively, each of the first two quarters; the Celtics straight up bullied the Hornets in the third quarter to the tune of a 36-20 drubbing. The Kyrie and Kemba duel became more of a big brother/little brother situation, in which Kyrie big bro’d Kemba for another 10 points in the Q3, while Kemba only managed to score 2 points and missed his first shot of the game (plus three more). Kyrie was straight up playin’ with fools like it was the schoolyard out there.

Al Horford turned it on during the third – more on that in the highlights below – and it became a 32 point lead for the Celtics thanks to the defense finally stepping up their game and becoming somewhat respectable for twelve minutes, allowing just twenty points. When the third quarter ended the Celtics were shooting a remarkable 62% from the field and held a firm lead at 103-79; all you could ask for as a fan was a good start to the fourth.

And they got it. The Celtics IMPROVED upon their team FG% and at one point reached 68% efficiency from the field. Eventually, Stevens brought in all of the bottom-of-the-bench players and that dropped the stat back to 62% – but still! That’s unbelievable.

If you think I’m going to sit here and break down a complete stomping any longer than I already have, I’m sorry to say, you’re sadly mistaken. The starters got some extra rest and didn’t play the final frame. The bench played great and scored nearly half of the team’s points by the end of the game, finishing with 61. Suffice it to say, Boston as a team was locked in from the start as they scored from the tip and never lost their lead. Final Score: 134-106

The Celtics just shot 62% over the course of a full game, so you can rest assured that the Hornets coaches are asking this of their team right now. At some point it’s not about coaching anymore. That’s just a lack of effort.

Watching the Moose show us exactly what he’s capable of on the offensive end made tonight that much sweeter. He’d finish with 14 on 6/9 shooting to go along with his 4 rebounds and 2 assists in twenty minutes.

Monroe spins and finishes in the lane! pic.twitter.com/LD9iMWddsF

One of the many pretty J’s from Morris tonight. We love Good Mook. He’d finish with 15 points, while shooting 7/12 from the field, with 8 rebounds and 2 assists.

The defense wasn’t there for either team tonight, but this steal by Jaylen was well timed and beautifully finished. Jaylen had a hot start to the game but ended up playing just over twenty minutes and finished with 15 points on on 4/7 shooting, with 5 rebounds and 4 assists.

The steal and the slam by Jaylen! 💪 pic.twitter.com/pU86Kya05M

Al Horford came out and went a perfect 2/2 plus the foul for 5 points in the 3rd quarter after remaining scoreless for the first half. He also added a couple dimes during the 3rd, including this look to Tatum for a corner 3.

Tonight we learned it’s not always pretty, but Monroe can get the job done at times.

Monroe gets the and-one bucket to drop off glass! pic.twitter.com/LQL6ZVgom2