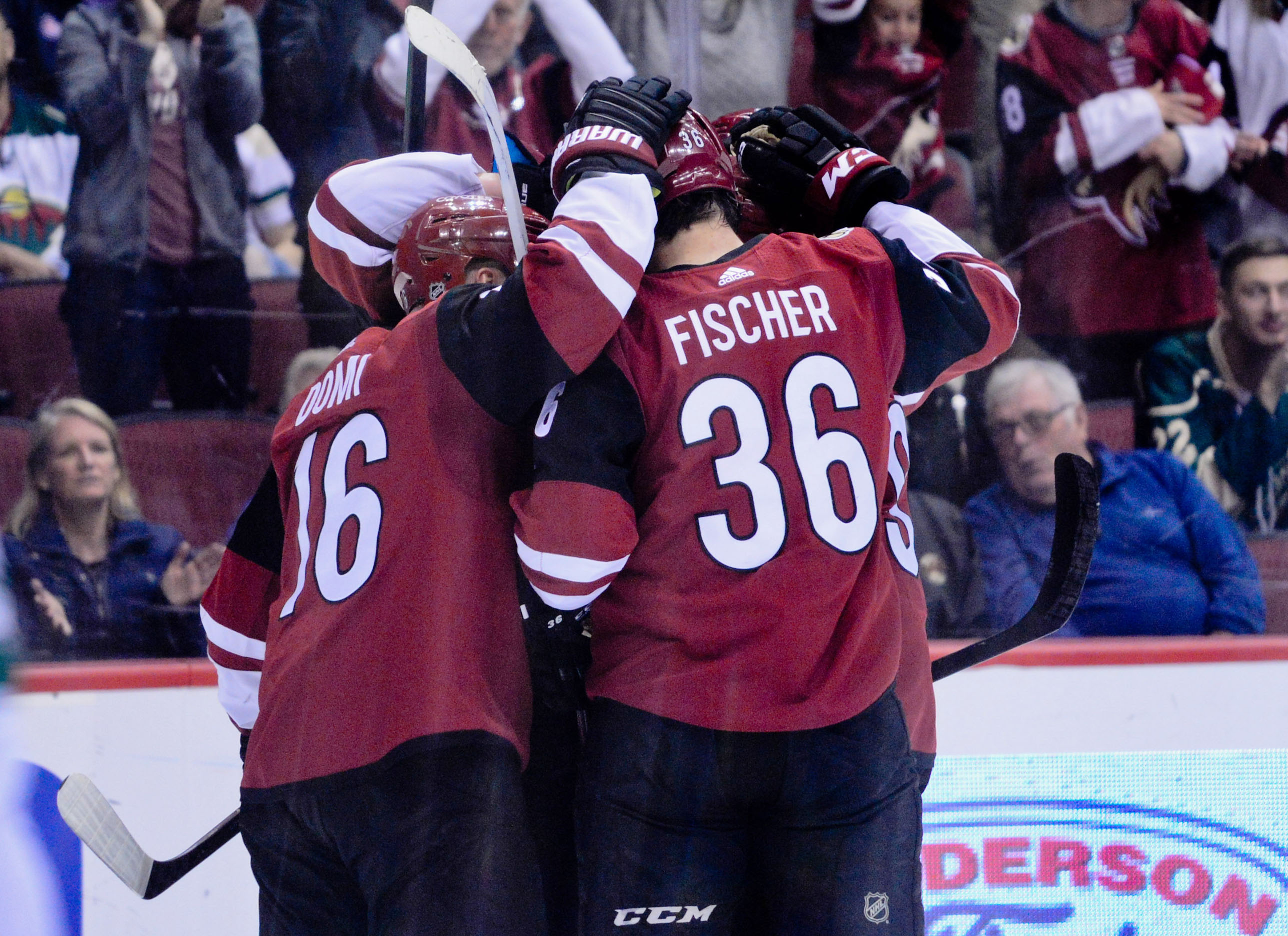 As High School Boys hockey teams across the state battle their way through the playoffs I was sort of caught off guard by a Tweet by the Moorhead Spuds hockey team.  It was a short video of Moorhead’s dramatic double overtime win over Elk River back in 1995 score by none other than the Spuds’ Matt Cullen.  I remember watching that game at National Hockey Center in St. Cloud.  It was a total heartbreaker and for a long while when my school (Elk River) was in Section 7AA, Moorhead was our nemesis.  We would eventually get our revenge in the form of an 8-1 rout in the state championship in 2001.  I wonder if the Minnesota Wild will have revenge on their minds when they face Arizona tonight, a team which embarrassed them in St. Paul as the team squandered a late game lead to lose 4-3 in overtime.

The Coyotes didn’t do much at the trade deadline either as not many clubs felt they had anything worth acquiring and Arizona wasn’t interested in parting with some of its young talent.  Minnesota is playing some of its best hockey where they’ve earned wins against clubs that are trying to scratch and claw their way into the post season; can the Wild put the boots to the Desert Dogs?

1st Period Thoughts:  The opening period had a good pace to it with the Wild looking sharp and focused to not give the Coyotes much in the way of time and space.  The Wild were physical in their own end and being very deliberate as they exited the zone as they didn’t want to give Arizona anything to pounce on by being careless with the puck.  The Wild’s top line of Eric Staal, Mikael Granlund and Jason Zucker would put on a clinic nearly every shift they took as they’d race into the offensive zone and then create all kinds of quality opportunities to shoot the puck.  Antti Raanta was getting peppered with shots on goal and Minnesota kept swarming all over the Arizona zone as the Wild were weathering checks and working pucks behind the Coyotes’ defense.  Minnesota was trying to get some of its other lines more involved; especially the line of Mikko Koivu, Zach Parise and Charlie Coyle.  Parise would weather a check by Jason Demers and he’d swing a pass up to Koivu who drove down the slot and then tried to feed Coyle with a backhand pass but he’d push a shot wide on what looked like an easy tap in.  Parise drew a penalty on the sequence and the team kept out that same forward group for the 1st half of the power play.  The early portion of the power play was only able to generate shots from the perimeter.  Minnesota wouldn’t get much done on the man advantage but Arizona wasn’t able to turn the momentum of a successful kill into much in the way of offensive pressure.  Derek Stepan had a chance to shoot the puck from within 6 feet of the goal but he hesitated and the puck was knocked off his stick by Jonas Brodin and he didn’t manage to get a shot off.  In fact, the Coyotes first shot didn’t come until 16 minutes into the period which drew a Bronx cheer from a mostly hostile ‘home’ crowd.  Minnesota would break the stalemate as Daniel Winnik was tripped up by Jordan Martinook who slowed down in frustration as soon as he saw the officials arm go up and Joel Eriksson Ek alertly skated down the puck and swooped behind the Coyotes goal buying time for the Wild to pull their goaltender for an extra attacker on the delayed call.  That extra attacker was Parise who Eriksson Ek found Nino Niederreiter with a crisp pass and he swung it over to the veteran who moved in and sniped it by Raanta.  1-0 Wild.  The goal seemed to finally spark the Coyotes to finally start skating and they managed to have a few shots in the last few minutes of the period and Minnesota had to feel pretty good about its start, outshooting Arizona 13 to 5.

2nd Period Thoughts:  Arizona started the 2nd with a lot more energy after its sluggish start.  Minnesota still carried a business-like attitude as the Koivu, Coyle and Parise line nearly connected early as Koivu was set up in the slot only to fan on a backhander.  Minnesota continued to give the Coyotes fits as Granlund would dangle around Niklas Hjalmarsson who slashed at the smooth skating Finn as he lost the handle of the puck as he looked to cash in from in close but it still resulted in a Wild power play.  Minnesota wouldn’t create much with the 1st half of the power play as again they gave Niederreiter, Parise, Koivu most of the ice time to try to get them going offensively.  The 2nd power play unit of Zucker, Staal and Granlund was marginally more successful as they set up Jared Spurgeon 3 times but each time he blasted it high and wide of the goal.  It seemed to me like the Wild were forcing more and more shifts to its snakebitten lines and that allowed momentum to slowly shift towards the Coyotes favor.  The Wild would get tagged with a hooking call late in the period and it would prove costly.  As the official dropped the puck for the faceoff it would just sort of sit on the dot before Jacob Chychrun moved in and fired a laser by Alex Stalock to tie the game at 1-1.  The Wild continued to deploy its snakebit players back on the ice for the closing minutes and with a goal giving Arizona a chance to win, they skated with more energy and passion and Minnesota kind of held on to keep it tied going into the 2nd intermission.  I understand what the team is trying to do.  Its try to ignite some offense from dormant players; but at what cost?  The Wild have let the Coyotes hang around and now have jeopardized a great opportunity at earning another 2 points.  How much longer is the coaching staff going to let this farce continue?  The truth is, the Wild are in 3rd place in the Central Division.  We’re not at the top with an 8-point lead and games in hand.  We’re in 3rd with a few points separating us from those scratching and clawing at us.  Points are too important to squander them with foolish experiments.

3rd Period Thoughts:  The Wild continued to soldier on with their ill-advised experiment.  The Coyotes would start to amp up their puck pressure and their forecheck would catch Minnesota standing and reaching and Christian Dvorak would score as he hammered one shot on goal that Stalock couldn’t contain and then shoveled it home.  2-1 Arizona.  Minnesota clearly was not happy so they sent out their top line (Staal, Granlund, Zucker) and they would draw a penalty in the process.  The top line again was kept on the first part of the power play which certainly revealed the urgency the Wild had for this point in the game.  The skilled group again would cause trouble and force a clear of the zone that ended up in the stands to give Minnesota a 5-on-3.  With a 2-man advantage, Bruce Boudreau opted for the snakebit group and they would tie the game back up as Mikko Koivu took the puck to the net and beat Raanta from in close.  2-2.  The relief would be short-lived as a horrible turnover near the blueline would result in long pass to Richard Panik who wired a shot by Stalock.  3-2 Coyotes.  The pain continued as the Coyotes would add to their lead as Kevin Connauton bombed a shot from the right circle that beat Stalock cleanly who seemed to be struggling to track the puck.  4-2 Coyotes.  Minnesota would add some drama late as Matt Cullen scored on kind of a fluke goal late to cut the Arizona lead back to one.  4-3 Coyotes.  Minnesota tried desperately to press for the equalizer as they pulled Stalock (who wasn’t stopping much of anything late in this game anyways) with 2 minutes left.  It wasn’t meant to be as Spurgeon pinched and fired a shot right into Coyle’s mouth instead of the goal that had the Wild forward bleeding all over the place.  Arizona would score an empty netter to seal a 5-3 victory.

This game was a self-inflicted wound waiting to happen from the start.  The dogged and lame insistence on getting the Koivu, Coyle, Parise line started.  Someone may say hey it worked, they scored two goals.  But did it really?  How many times did they fail to score on prime opportunities?  The Wild allowed Arizona to hang around and believe that it had a chance to win and they knew that was exactly what the Coyotes would be hoping for.  Instead of beating up the worst team in the NHL the Wild found a way to lose to this club a 2nd time this season.  That’s right, we’ve given up a chance at 4 points to the worst team in the league.

I put this loss squarely on the shoulders of Bruce Boudreau in sticking with this failed experiment far too long.  At some point you have to cut your losses and let your horses carry you to a victory.  The Wild are not nearly good enough to throw away opportunities to earn points.  They didn’t do that on their eastern road trip last week; but for whatever reason they had their minds on Colorado and decided to turn this game into a glorified exhibition for its higher paid snakebitten players and they got bit big time.  They should feel ashamed of themselves and now they will have a far tougher challenge tomorrow against a very motivated Colorado squad who knows its a little bit closer to catching up to us.  Pathetic.

In the past I’ve occasionally mentioned how various players who attended the Wild’s summer prospect camp have faired because at times they’ve gone on to become some pretty special players.  For example, Tyler Johnson, Matt Read, Alex Iafallo and J.T. Brown have gone on to play for other NHL clubs after participating in multiple prospect camps with the Wild.

LW – Jared Bethune (Prince George, WHL) ~ the former Warroad star has been at Wild prospect the last few seasons and is in his overage season with the Cougars.  He’s really taken off this year as he had a goal and an assist and was a +3 (4 shots on goal) in Prince George’s come-from-behind 7-6 win over Kelowna on Wednesday night.  The 6’0″, 187lbs left-shooting winger has 21 goals, 62 points, 60 PIM’s and is a -8 in 62 games.