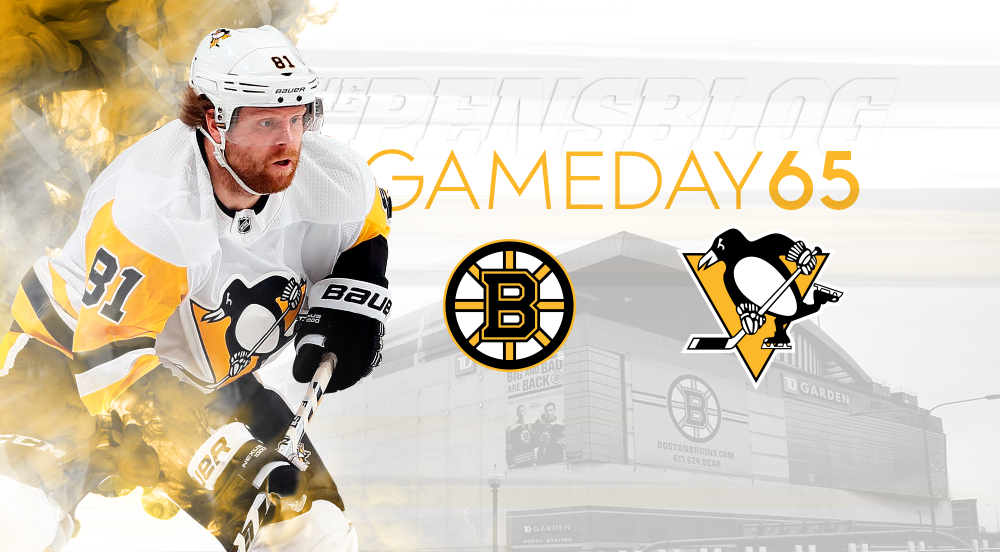 After a lackluster effort against the Devils the Penguins start the last full month of the regular season tonight against newly acquired Rick Nash and the Bruins. Rick Nash, new uniform, same amount of trash. The Penguins put together a successful February by most people’s definition of success, the team went 8-3-1 in the month while acquiring center depth in Derick Brassard. The Bruins know a thing or two about successful February’s after posting a 9-3-0 record in the month to add on to their ridiculous 8-1-2 January. Since the start of 2018 the Bruins are 17-4-2 and the Penguins are 17-6-1 making tonight one of the best Thursday night matchups of the season and surprisingly enough it is actually on national television (NBCSN).

The last time these two faced off it was a wild 6-5 overtime victory for the Penguins back on January 7th, you will recall it as the moment we started thinking that the Pens may not be dead yet. That game featured a 3-1 Pens lead after the first followed by four unanswered Boston goals in the second before Malkin scored as time expired to stop the bleeding. All of that offense was on display at what is now the beginning of the hot streaks these two teams are on so look out for tonight.

One thing that the Bruins have been associated with for pretty much all of Zdeno Chara’s existence in a strong penalty kill. The unit currently sits 13th in the league at 82.2%, just 0.2% “worse” than the Penguins 11th place 82.4%. When we look at the heat maps from Micah’s hockeyviz.com we can immediately see that the Bruins do not let opposing powerplays get to the center of the ice:

The Bruins love closing in the box on the penalty kill which could potentially cause problems for the Penguins powerplay. If you recall the final minutes of the previous game when the Pens pulled their goalie they failed to get many good looks at the net because they were trying to make the cross ice feed through the closed box that wasn’t there. The Pens looked that way because that is what their powerplay revolves around and their heat map shows that:

The Bruins shut down the exact area where the Pens like to work. This of course doesn’t matter too much considering the Penguins averaged 2 powerplay opportunities per game in the month of February but in a battle of top teams special teams can play a big role. I took the Penguins graph and fit it to the Bruins along with transparency to show where the Penguins hotspot lines up with the Bruins weaker area:

Now we see it, the weakness in the system is right where Phil Kessel loves to snipe, that is if his wrist is 100%.

The Bruins went out of their way to acquire Rick Nash from the Rangers at the deadline in an attempt to give them the scoring depth they felt necessary to compete in the East. Is Rick Nash enough for the Bruins to compete against the Lightning and Penguins in a seven game series? Like assessing Derick Brassard after one game it is way too early to answer that. Speaking of Brassard tonight should be his second game with the same linemates as he attempts to acclimate himself to the Penguins system, as a rule I try to hold all judgements of a player for at least the first 8-10 games with constant linemates, especially considering the guy has been playing the Ottawa 1-3-1 trap recently. Much like judging Guentzel on is ability to score earlier in the season while switching lines every other game, it wouldn’t be fair to judge a new center if his cast of wingers is constantly revolving. Mike Sullivan announced yesterday that Zach Aston-Reese was not a healthy scratch on Monday night and instead is out with a “longer term” injury that he suffered during the same practice that left Matt Murray concussed. The loss of ZAR put Rowney at 4th line winger which threw a wrench in Sullivan’s plans to start rolling 4 lines as Rowney was given just 1 shift in each of the final two periods for a grand total of 4:01 TOI.

Offensively the Penguins top three lines should be a handful for the Bruins defense and considering the way he is playing and the fact the Bruins have the last change at home I have to expect the Chara line to mostly match up against Malkin tonight. Either way you split it there is a potential mismatch for the Penguins if they can exploit it. There hasn’t been any news on the Matt Murray front as he has entered the standard concussion protocol, Casey DeSmith played really well against New Jersey but it wouldn’t surprise me to see Tristan Jarry take the crease tonight since he was originally reassigned to Wilkes-Barre in order to get more reps in following a sloppy performance in Florida.

Changing it up a bit today and giving five things I’m paying attention to in this game (in no particular order) instead of just one player from each team. I already talked at length about the powerplay vs pk above so that won’t make the list.

Both teams are calling this a measuring stick game which is pretty accurate. The Pens will be without their starting goaltender but everything else is pretty close to what it should be in the playoffs. Tonight we should get a chance to see if the performances against Florida and New Jersey were nothing more than the team overlooking those teams (which is what it looked like) as I suspect we will see a completely different team out there tonight. Prime time game against two teams steamrolling towards the playoffs, you couldn’t ask for a better Thursday night.