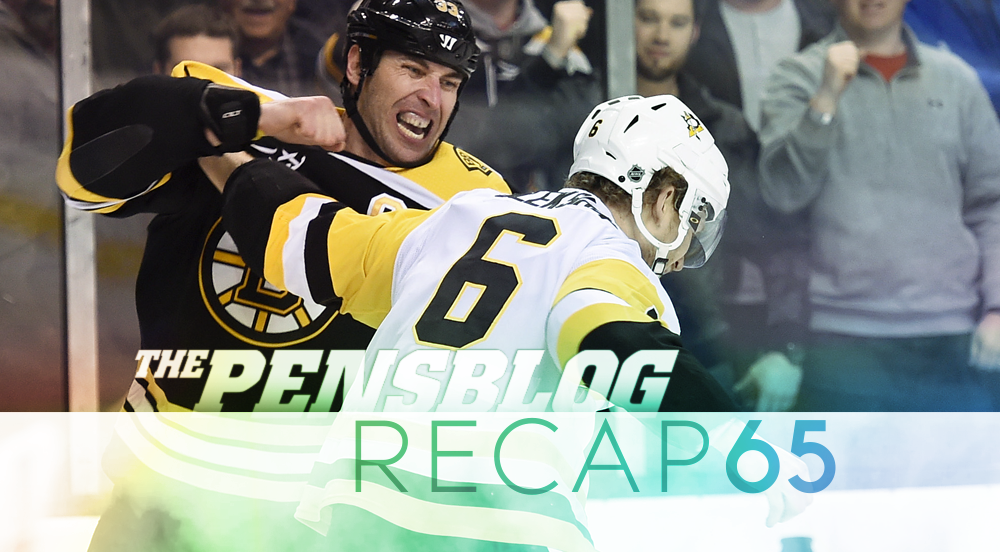 Prior to the absolute lawlessness that was this game, it was announced yesterday Aston-Reese is out “longer-term” with an LBI.

Evgeni Malkin was named the NHL’s 2nd Star of the Month:

Lineup the same as Tuesday:

Pensblog correspondent G-Off  had boots on the ground for this game and we’ll be checking in periodically throughout this recap.

Boots on the ground here in Boston for @Pensblog pic.twitter.com/TfcHjrHZxb

What looked like it was going to be a slow start by the Pens quickly turned positive…briefly. After giving up a grade A chance, the Penguins would get on the board less than a minute in after the red-hot Geno would feed Olli Maatta in the slot. Treat that excitement like a cold beer on a mid-July day, because it wouldn’t be lasting long.

Should’ve Tukka some more time lining up to that one, Rask.

With that pun, I would anger the goaltending gods and for that, I am deeply sorry.

The lead wouldn’t last very long as regular season hero Rick Nash threw a shot-pass in front and David Krejci would get a stick on it, deflecting it past DeSmith.

They say good things happen when you crash the net, welp.

In a moment flukier than the 1980 United States Men’s Hockey Team beating the Soviet Union, David Pastrnak would take a feed from Marchand and his shot would hit everything along the way…except Casey DeSmith…

DeSmith’s night would end quicker than your after prom experience. Geno was rung up for holding. On the ensuing power play, Rick Nash would tap home a gimmie.

If there’s one thing you can set your watch to, it’s your iPhone and the Kessel family stepping up when America needs a hero. Amanda Kessel’s brother would put the Guinos within one.

If you’re a goaltending coach, don’t bother with this game, this trio didn’t exactly bring it in the first ten minutes.

Make that the first fifteen. Tristan Jarry, showing solidarity to his goaltending partner, would let David Backes go far side, top-shelf from a piss-poor angle to restore the Bruins’ 2-goal lead.

Gord Miller with an unreal line on the broadcast prior to this goal, “This game’s going to end when mom calls them in for dinner!” He wasn’t wrong. This period resembled a game of shinny on the pond (with the good old Canadian boys, did you know how was played on ponds? I feel like NBC, TSN, CBC and Sportsnet don’t tell us enough) than it did an NHL game in 2018. Not complaining. It was strangely fun…if you were a Bruins fan or a fan of the other 29 teams.

A night of awful goaltending for the Penguins would continue. Jarry would give up an uncontested point goal from Torey Krug to make it 5-2 Bruins. Ugly, ugly, ugly.

The Penguins would seem to answer back, but it was all for not as Scapegoat #2 would kick the puck in and it would be disallowed. Pretty obvious stuff there, boys.

Following a very pedestrian power play – the fourth line would chip in. Riley Sheahan would streak down the wing with less than 10 seconds remaining and fire one past Tukka Rask.

Seriously, who put the NHL 18 goaltending controls on manual?

So, I said last recap there’s something to be said for a GM giving a struggling player a vote of confidence re: Hunwick. I’m in no way defending his poor play this season. He’s been bad. That said, the torches and pitchforks were out on Twitter dot com after DeSmith was pulled.

Listen, the only goal I can truly fault him for was the power play goal. He’s got to close the lane better so that pass doesn’t get through to Nash as easily. Eventually you need your goaltender to make a save. Hunwick absolutely needs to be better, the goaltending needs to have less leaks than the current White House. Both can exist on the same plane.

GOOD NEWS: That was only the first period.

BAD NEWS: That was only the first period.

The second period would pick up right where the first left off. MF Dumoulin would take an early penalty and as the first PK went, the Pens looked strong then collapsed late. Krejci gets his second of the night. Defense out to lunch earlier than your laziest coworker.

Surprisingly enough, we’d go an extended period of time without either goalie completely defecating all over their own bed. If you’re like me, you spent the last two weeks completely enthralled by the Winter Olympics. Unfortunately, we don’t get to see Olympic Diving during the Winter Games, but Brad Marchand got us in the mindset for the Summer Games.

The Pens would start to get some momentum back after dominating possession on a power play and after, we truly made this a game straight out of the 1980s. Jamie Oleksiak  and Zdeno Chara would drop the gloves, marking the first giraffe vs. giraffe matchup in NHL history.

That nod from Oleksiak, “Why not? Let’s do this.”

The fight would not invigorate the Penguins. Krejci on the power play, hat trick. That would be his first in four years. The Bruins power play would improve to 3-for-4 with that one.

Carter Rowney would improve his torrid pace on the evening, being on the ice for five of the seven goals scored by the Bruins! What a performance, you gotta respect it.

With just over two minutes left, it was time to turn the lights out. Pastrnak 8-3.

As is tradition, when one team is getting run out of the building the best answer is to get petulant, or as the traditionalists call it, “chippy.” There was a hip check by Krug that was called as interference, Sheahan had words with him and…I don’t even know. Get out of the damn period. Treat the rest of this game like your idiot friend that can’t hold their liquor. Give them water, pretend it’s vodka and get them home before they vomit all over the bartender.

I didn’t watch the third period. What I did do was watch the 1985 sci-fi classic, Back to the Future starring a young Michael J. Fox that must travel back to 1955 in order to save his own existence. A movie in which the hero seems downtrodden to begin with, but manages to find himself halfway through, facing his fears and bullies head on, defeating them in the process.

-Drown in cold ones, our “Boots on the Ground” segment with G-Off was cut short.
-Do I even need to go to Natural Stat Trick? The Penguins got caved the hell in in just about every aspect of the game. The forwards weren’t good, the defense was bad and the goaltending was somehow worse.
-Quiet two goal night for Olli Maatta, but then again, when your second goal puts you within four…
-Conor Sheary, once again, is a detriment to this forward corps. He can’t catch a pass, make a pass, hit the net and just seems to stymie any type of flow they have.
-Carter Rowney, yikes. Let’s hope ZAR’s injury isn’t too long term.
-Save us, Matt Murray. Jarry and DeSmith are perfectly fine stopgaps, but sans-Murray this could get ugly.
-Divisional matchup Saturday against the Islanders at the Paint Can.