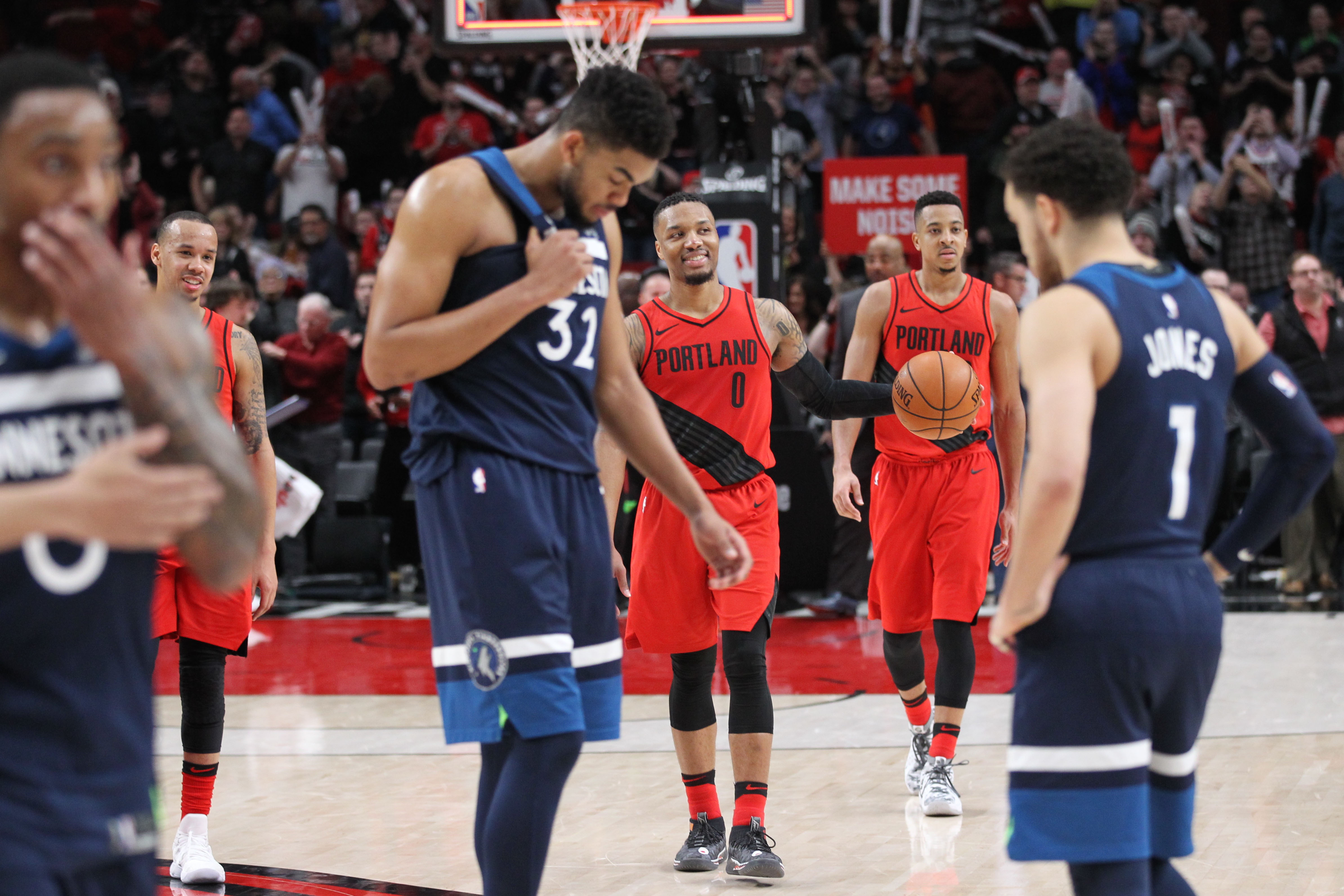 Tough one in Portland. pic.twitter.com/nuWAJK7iNB

16 PTS and 6 REB midway through the 2nd quarter! pic.twitter.com/vJzNXVz0r7

It's a final: After leading by as many as 11, Wolves lose 108-99 at Portland to a Blazers team that wasn't going to keep on missing 3s. And it didn't. Now on to Utah tomorrow night

Takeaways:
1) KAT is a stud
2) Playoff atmosphere
3) Portland's guards/shooting end up being too much
4) Wolves 3 point shooting non existent. Can't win consistently in NBA like this
5) Get Bejelica more 3PA
6) Not great PG play tonight for Wolves
7) This 7 game stretch is scary

Portland outscores Minnesota 33-21 in the 4th to win 108-99 in a game that felt much like a playoff game.#Twolves drop to 38-27 on the year (13-20 on the road now), with tomorrow night's game in Utah suddenly meaning a little bit more for Minnesota.

The Aminu 3 sparked the Blazers and everything got out of hand after. Dame came alive in the second half as expected. Wolves played excellent for 42 minutes. Not enough @ PDX. Hoping Gibson is ok after leaving the game hurt. Tomorrow night in Utah is going to be extremely tough.

1. Dear God Belly is WIDE OPEN for three pointers all damn game, and he never gets the pass. It's bordering on negligence.

2. Those refs were atrocious. Not even saying the Wolves were on the worse side of it, they were just terrible.

Wow guys, that was very disappointing. They decide to look away from Kat for no apparent reason. We have no 3 point shooter at all who can get hot ( Jamal is sometimes but is inconsistent) welp on to the next one……#AllEyesNorth

Nothing unexpected but no less frustrating because it was a collection of all of the avoidable dumb things: 8 man rotation, too much Crawford, passing up a dozen wide open 3’s, Towns getting completed iced out in the 4th quarter, etc.

Hell of a game. Final stretch of this season’s gonna put a few grey hairs on my head #AllEyesNorth

Damn shame the #Wolves wasted a bomb effort by Towns. Not enough touches in the 4th quarter, possible the back was a factor but why would he be on the court then? Gotta have a W tomorrow night #AllEyesNorth