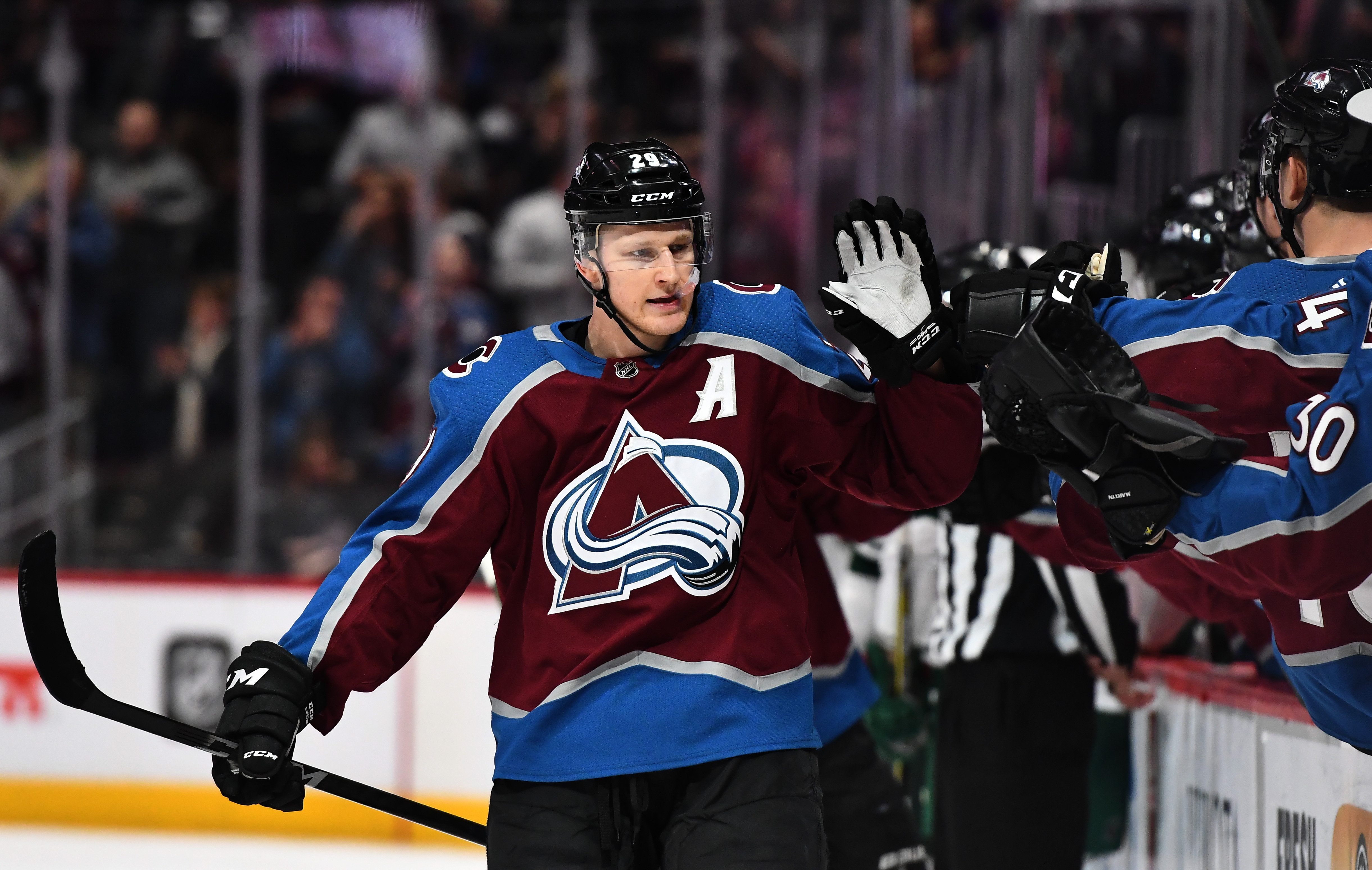 I know in previous blogs I’ve told you that I am a high school tennis coach (as well as football coach).  One of the basic truths of tennis; especially for younger and less developed errors is discussing ways to limit the amount of unforced errors they make.  That doesn’t mean you are playing so hesitantly that you are afraid of making a mistake, but rather playing under control in such a fashion where you are not taking foolish risks with your shots.  For example, when you are on the run the goal should probably be to get the ball back in play as opposed to trying to hit a winner (a shot that ends the point for those not familiar with tennis jargon).  A good player waits for that opportunity where they are able to set their feet properly before they go looking for that winner.  The result is usually less unforced errors and greater success.  Last night, the Minnesota Wild were reckless and making poor decisions and not as much on the ice as it was behind the bench.

Minnesota decided a game against the worst team in the NHL was a chance to try to ignite its 2nd line with lots of opportunities to score and while it didn’t make a ton of mistakes it didn’t capitalize on the chances it had.  That let Arizona hang around and believe they had a chance and the result was a loss that should’ve been prevented.  With wins from other clubs in the Central, the race has tightened up so can Minnesota bounce back in on the 2nd half of a back to back against Colorado?

1st Period Thoughts:  The Wild would start the game with its top line of Eric Staal, Jason Zucker and Mikael Granlund and it was obvious the team was not going to waste valuable time with trying to get Zach Parise, Charlie Coyle and Mikko Koivu.  The aforementioned line repaid their team with lots of ugly shifts which Colorado took full advantage of to go on the attack.  Colorado’s top line featuring Nathan MacKinnon was able to put Minnesota on their heels and the Wild had to scramble around in their own zone as Devan Dubnyk appeared to have his head on a swivel as pucks flew by him.  Minnesota had an opportunity early as Luke Kunin made a nice pass up to Nino Niederreiter for an opportunity from in close but he lost the handle on the puck before he could put a shot on Semyon Varlamov.  The Wild’s ‘Slow Money Line’ of Koivu, Coyle and Parise would get caught in their own zone and as they tried to skate the puck out it would be poke checked off their stick where it eventually reached Samuel Girard at the point who let go shot that deflected off Mikko Rantanen and Gabriel Landeskog before eluding Dubnyk.  1-0 Avalanche.  The goal got the Avalanche moving that much faster and they’d add to their lead a few minutes later on the man advantage as MacKinnon wired a shot by Dubnyk.  2-0 Avalanche.  Wild Head Coach Bruce Boudreau would call a timeout to re-focus his team but it didn’t seem to make much difference.  Minnesota would try to answer back with its top line and while they managed a few shots from the perimeter they didn’t seem willing to go to the crease to battle for rebounds and the Avalanche defense were able to escort pucks out of danger.  The Wild didn’t seem to have the speed or the want to and Minnesota found itself getting into little scrums and skirmishes after the whistle as Colorado’s psychological warfare was in full effect and it was working.  Not a promising sign for Minnesota’s chances this evening.

2nd Period Thoughts:  The sound of a car screeching its tires as if it is breaking and then a metallic crunch and the sound of glass shattering was way too mild to describe this trainwreck of a period.  Minnesota tried to get some energy from its youngsters Joel Eriksson Ek and Luke Kunin who the Avs stepped up and blasted with a few checks before counter attacking the other way.  Kunin didn’t skate all the way back which gave Tyson Barrie an opening and he’d snipe a shot by Dubnyk and it was 3-0 Colorado.  A few minutes later the Wild would turn the puck over in the neutral zone and Nathan MacKinnon would fly into the Minnesota zone and fire a shot that seemed to beat a surprised Devan Dubnyk to make it 4-0.  Minnesota decided to challenge the play as it looked as though Mikko Rantanen may have still be in the offensive zone when MacKinnon carried it in but the officials disagreed and the goal would stand, and to add insult to injury the Wild would be given a delay of game penalty for the bogus challenge.  The review looked pretty close to me to say one way or the other and I probably wouldnt’ve challenged it since it didn’t seem as though any member of the Wild really wanted to compete tonight.  Minnesota would manage to kill off the penalty but the pain continued as Carl Soderberg sort of spun and swung a shot on goal that caromed off the skate of Staal and by Dubnyk who was clearly not focused at all.  5-0 Colorado and Bruce Boudreau had seen enough and he’d pull Dubnyk in favor of Alex Stalock.  It didn’t really matter.  Minnesota would turn the puck over and then made only a lethargic effort to defend and Mikko Rantanen banged home a shot to give Colorado a 6-0 lead.  It was only after this goal that Colorado appeared to ease up and the Wild started to settle down and begin to create a few offensive opportunities.  Minnesota would prevent the shutout as Mikko Koivu buried a Zach Parise pass but the Wild had to feel thoroughly embarrassed with the way they were playing to this point.

3rd Period Thoughts:  So with absolutely nothing positive (beyond MacKinnon who is on my fantasy team, so keep piling up the points bud) to talk about I decided it’d be better to go and play Mutant League Hockey on Sega Genesis instead of watching this debacle of an effort.  (if you haven’t seen this game, here is a little sample of the game play)

You might say, its tough to take a game like that seriously.  How is that different from the Wild when they fail to compete after an embarrassing effort the previous night?  Not much, as Minnesota would give up another goal after more errant passes turned into an easy 2-on-1 from in close as Blake Comeau set up Matt Nieto for an east tap in.  7-1 Colorado.  The rest of the period was Minnesota playing mostly its bottom 6 forward lines and hoping to establish some positives for its 2nd line with some power play time late.  It didn’t work out too well as bad passes thwarted really any attempt to establish any sort of sustained offensive attack.  Minnesota’s lack of execution typified what was another embarrassing road effort.

Its not worth talking about goaltending since Dubnyk was so atrocious and Stalock wasn’t much better.  The team didn’t show up to really compete in back-to-back games.  Minnesota was missing on passes all night and this gave Colorado plenty of times to generate chances via transition through the neutral zone.  The Wild have a hard enough time keeping up with the speedy Colorado squad as it is.  MacKinnon had a 5-point night and Mikko Rantanen had a 4-point night.

Offensively the Wild seemed out of sync all game long and it was almost like the Wild were just hoping to kill time.  Nino Niederreiter is clearly injured as he hobbled around the ice and often would just sort of turn in place and reach for the puck instead of skating which tells me he’s still suffering from some kind of lower body injury.  If he can’t change directions and chase after pucks he’s worthless at both ends of the ice.

Minnesota’s lack of focus was self-inflicted after a truly poor and foolish decision to give elevate the egos of some struggling players over its team’s goals.  The Wild now have tightened the playoff race and can clearly hear footsteps as the cushion they once had is virtually gone.  This was an opportunity to gain some space against the those clubs like Colorado scratching and clawing for a chance at a wildcard spot.  Instead we decide to take this back to back off and get blown out in Colorado for a 2nd time this season.  The road sweep seems like eons ago now.  Pathetic.