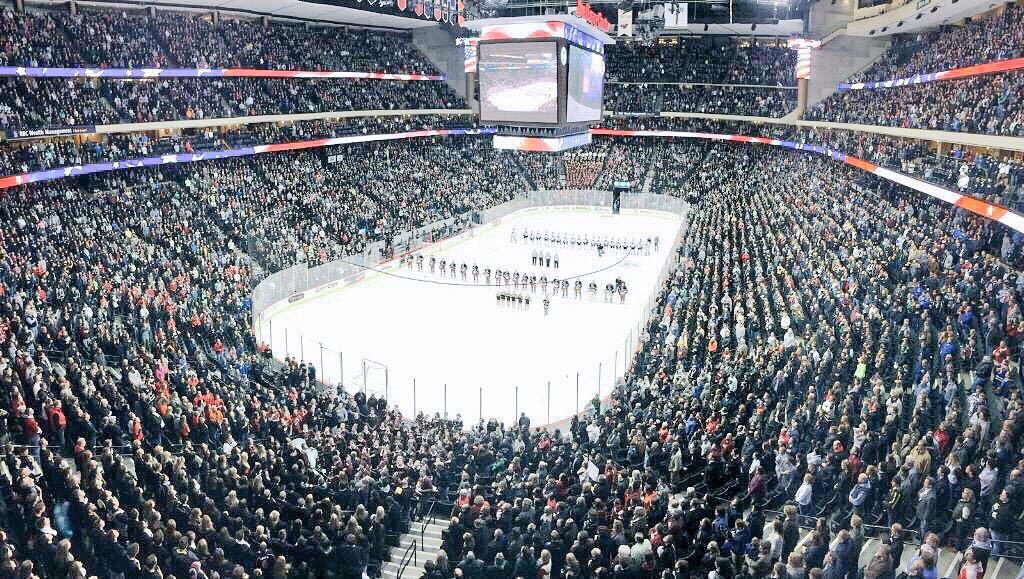 On almost any nationally broadcast NHL game on NBC or by any of the Canadian TV Networks which involves the Minnesota Wild, inevitably they will make a reference to the continuing phenomenon that is the Minnesota State Boys High School Hockey Tournament.  ‘The Tourney’ as its is simply called among those in the Minnesota hockey community is really what gets the state buzzing for one tail end of a random week in March.  Like the Olympics, once anonymous teens can become instant celebrities if they carry their team to a coveted state title.

Fans make their annual pilgrimage to St. Paul to watch it all unfold and if they’re lucky, it may be their alma mater or current high school battling it out on the ice.  You can bet NHL scouts will be there too as they want to see something special and in most tournaments they realize there is a strong possibility they will see future NHL players.  Even a quick look at last year’s tournament had 8 players that had played in at least one State Tourney get drafted last summer.  Casey Mittlestadt (8th Overall, Buffalo), Ryan Poehling (25th Overall, Montreal), Jake Oettinger (26th Overall, Dallas), Dylan Samberg (43rd Overall, Winnipeg), Noah Cates (137th Overall, Philadelphia), Nick Lievermann (187th Overall, Colorado), Robbie Stucker (210th Overall, Columbus) and Josh Ess (215th Overall, Chicago).  Just scanning over some all tournament teams the last ten years you’ll see plenty of players that are now playing for NHL clubs, players like Dom Toninato (Colorado), Nick Seeler (Minnesota), Charlie Lindgren (Montreal), Nick Bjugstad (Florida), Nick Leddy (NY Islanders), Brock Nelson (NY Islanders), Nate Schmidt (Vegas), and Neal Pionk (NY Rangers).   Not too shabby for an entity that supposedly isn’t what it used to be, eh?

During the tournament; especially during the quarterfinals where they have the full-team introductions all of the talk will be about the hair.  John King‘s annual homage to the ‘Flowetry’ will no doubt have another cast of memorable mullets and other hair trick’s (see what I did there?!?!).  Some may see this as a side show, but if looking good is feeling good, most of these kids grew a wicked salad because they wanted to and if it gives them an additional 5-minutes of fame then why the heck not?

The playoffs are over, and the Minnesota State High School League has released its seedings of the Class A & Class AA tournament which will begin this Wednesday at Xcel Energy Center.  Oh and one last night, if you’re not already giving @KarlEast and @FollowthePuck a follow on Twitter you’re missing out on lots of great High School hockey talk.  They do fantastic work, stick tap to them both!

#1 Hermantown  Hawks (20-6-2) vs. Monticello-Maple Lake Moose (19-7-2) at 6PM ~ strangely enough this is a rematch from last season when MAML was the talk of the tournament with their surprising run to the championship and pushing favorite Hermantown to its limits.  Hermantown survived a scare from Greenway, but they’ll be determined to make a statement by demolishing Monticello to let the rest of the field know they are the team to beat.  Tyler Watkins, Blake Biondi (Minnesota-Duluth recruit) and Jacob Herter bring experience and plenty of firepower to the Hawks attack.  Troy Dalheimer returns for Monticello as their leading scorer but I don’t think it will be enough.  Bruce Plante may not be behind the Hawks’ bench anymore as head coach (he retired) but I think Hermantown wins this one in a rout.

#2 Mahtomedi Zephyrs (21-6-1) vs. Mankato East Cougars (16-10-2) at 11AM ~ this one is going to get ugly.  It has been a while since the Cougars have been to the tourney and the Zephyrs avoided a scare by Northfield in the section semifinals and Mankato East beat an ‘ok’ Rochester Lourdes squad to represent Section 1A will be in over their head.  The Zephyrs are a pretty well-rounded team that can score and defend well with junior goaltender Bailey Huber as one of the state’s best in Class A.  I just don’t see Mankato East being able to overcome that, not unless senior goaltender Jack Cusey stands on his head as he’s been a 4-year workhorse between the pipes.  No doubt the Northfield scare will give the Cougars some hope.  I think this one will be won by the well-rounded and physical Zephyr squad by 4-goals or more.

#3 Orono Spartans (20-7-1) vs. Litchfield / Dassel-Cokato Dragons (16-11-1) at 1PM ~ The Spartans who knocked off a plucky Minneapolis team will take on a Dragons squad that upset Luverne.  Jack Suchy leads the way offensively for the Spartans while goaltender Evan Bakebuhl has been a wall for most the season.  LDC is carried by junior Brandt Pedersen.  The Dragons were in a the tourney two years ago so I don’t think they’ll arrive as starry-eyed as they did then and expect this to be a fast and physical game from the start.  If memory serves me correctly, Orono blitzed LDC earlier in the season and while I don’t think this will be a blowout I think the Spartans will win by two.

#4 Alexandria Cardinals (17-10-1) vs. #5 Thief River Falls Prowlers (16-10-2) at 8PM ~ This will be a battle of two Western Minnesota teams that are no doubt familiar with one another.  Alexandria ambushed a tough St. Cloud Cathedral squad to get here while the Prowlers knocked off Warroad.  Senior forward Aaron Myers along with sophomore Tucker Skime leads the way for Thief River Falls.  The Cardinals are not a team that jumps off the page statistically but it is no small feat to take down a star studded team in St. Cloud Cathedral.  I think Alexandria’s road to state was tougher and while I know Warroad is a traditional power house, they’re not what they used to be.  This should be a great game but I think Alexandria will prevail in a close one.

My Class A State Tournament Pick:  Hermantown – This might seem like a lame pick, but the truth is no team can match the Hawks experience and battle-tested nature.  Sure, Hermantown got a scare in the section playoffs but that is a testament to a strong section than weakness on the part of the Hawks.  I think they’ll prevail in a close game to Mahtomedi.

#1 Minnetonka Skippers (24-2-2) vs. Hill-Murray Pioneers (13-11-4) at 6PM ~ the Skippers bring a lot of depth which they used to get by a dangerous Holy Family squad against a battle-tested Pioneers team who upset White Bear Lake to punch their ticket to state.  Denver University commit Bobby Brink, Joe Molenaar, Luke Loheit (Minnesota-Duluth) and Jack Bayless.  Wisconsin commit Ben Helgeson is very talented and has performed well in the clutch for the Pioneers all season but it just won’t be enough.  While I know Hill-Murray will not be intimidated by the Skippers, I think they’ll be too much for the Pioneers and they’ll win by 2-3 goals.

#2 Edina Hornets (26-2-0) vs. Lakeville North Panthers (16-10-2) at 11AM ~ the Hornets have depth and firepower and they will face the Panthers who defeated cross-town rival Lakeville South to make it to the X.  I think NHL draftee and Gophers recruit Sam Walker (200th Overall, Tampa Bay in 2017), Mason Nevers, Jett Jungels (Northern Michigan recruit) Demetrios Kouzmontis (Arizona State recruit) and Lewis Crosby along with Gopher recruit Ben Brinkman on defense will be more than enough firepower to overwhelm just about anyone.  Curt Giles’ team is fast and rolls 4 lines and early in the season it seemed like they were putting up 9-10 goals on just about everyone.  The Panthers do have a few good scorers in juniors Spencer Schneider and Shane Griffin but I think Edina will win this one by 4 or 5 goals at least and while junior goaltender Will Johnson has been solid he’ll have to channel his inner Jim Craig if they are to have a chance.

#3 Duluth East Greyhounds (23-2-3) vs. St. Michael-Albertville Knights (23-5-0) at 1PM ~ The Greyhounds survived a big time scare by Andover and St. Michael-Albertville upset section 8AA favorite Moorhead.  However the Knights have good firepower led by sophomore Adam Flammang and Blake Spetz.  Senior goaltender Justin Damon will be busy.  Unfotunately for them the Greyhounds are fast, physical and deep and with Mr. Hockey candidate Garrett Worth, Ian Mageau and Ryder Donovan (North Dakota recruit) and stud defenseman and Wisconsin commit Luke LaMaster will make the Knights first trip to St. Paul is going to be a painful one.  I think the Knights might keep this one close for a little while, but Mike Randolph‘s club will prevail by 2-3 goals.

#4 St. Thomas Academy Cadets (25-2-1) vs. #5 Centennial Cougars (19-6-3) at 8PM ~ this should be a tremendous battle.  St. Thomas Academy didn’t have too much trouble with Eastview to make it while Centennial rolled to a win over Maple Grove to reach St. Paul.  I think the Cougars, led by Mr. Hockey candidate Lucas McGregor, Carter Wagner, Jack Menne and Hayden Brickner will be too much for forwards Payton Matsui and Colorado College recruits Rob Christy and stud defenseman Chase Foley.  Frank Brimsek Award (for top goalie) candidate Atticus Kelly is certainly gifted to stop by himself and this might be the best game of the quarterfinals in either Class A or AA.

My Class AA State Tournament Pick:  Duluth East – While the sexy pick is the star studded Edina team I think we will see two northern schools win it all this season.  Mike Randolph’s squad has the firepower and depth to beat Minnetonka and Edina and I see the Greyounds winning by two over the Skippers in the championship.