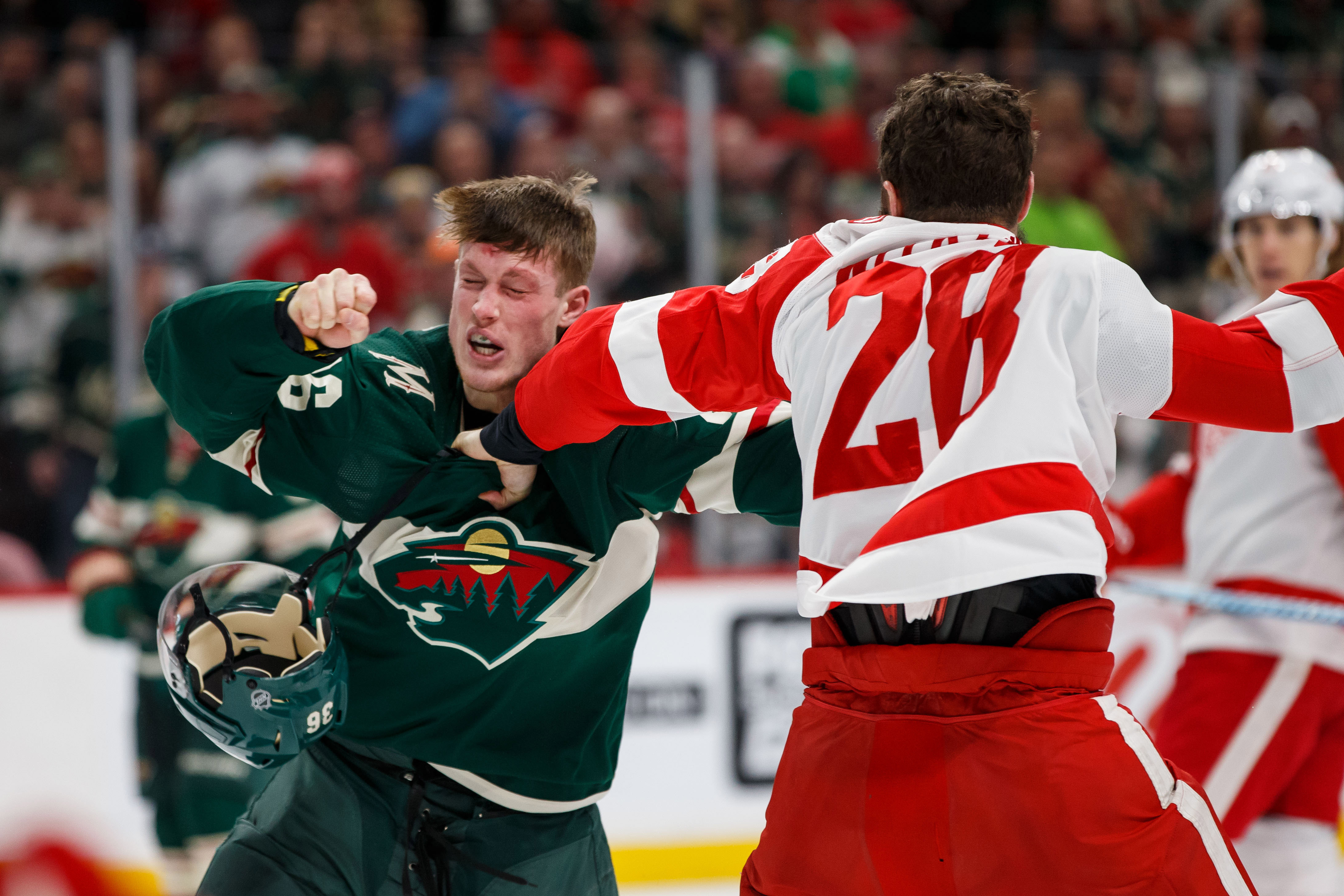 Something coaches often tell athletes is to have a short memory.  They want their athlete to not dwell on mistakes and let one string of unfortunate events create a whole new (and often times worse) set of problems down the road.  However that is easier said than done as a player dwells on what happened last time.  Its tough to put those bad feelings behind you and focus on the next game, the next shift, especially if the tough times have lingered for a while.  Minnesota certainly has felt the burn of two awful efforts in a row in back-to-back losses to Arizona and Colorado respectively.

On the flip side, Detroit has had its own challenges.  The team is on the outside of the Eastern Conference playoffs as of right now, but its trying to make a push with its roster full of young forwards.  The losses and poor play have the State of Hockey in a frenzy, can Minnesota rebound with a win over the Red Wings?

1st Period Thoughts:  Detroit seemed to be loose and energetic to start the game, winning many of the small races for loose pucks and outworking Minnesota along the boards.  The Wild seemed to be a half step slow and spent most of the first few minutes scrambling about their own end.  Home fans gave an appreciative cheer as Nate Prosser stood up Dylan Larkin with a check, but the good feelings would be short-lived later in that shift.  The Wild’s forwards were a bit too eager to leave the zone and as their defenseman tried to help out Devan Dubnyk, no one came back for the puck and it was gathered up by Justin Abdelkader who wired it in.  1-0 Detroit.  Minnesota would try to answer back and it was Zach Parise being denied on a diving save by Jimmy Howard.  The Wild would have an even better opportunity a few minutes later as Mikael Granlund set up Eric Staal for a breakaway chance but he was denied by an alert Howard and all the leading scorer for the Wild could say was ‘wow’ at the remarkable stop.  The Wild would take a cross-checking penalty as Matt Dumba knocked down Tyler Bertuzzi with a check near the Minnesota crease.  Minnesota’s penalty kill wasn’t particularly aggressive and instead used shot blocking as its primary method to keep pucks from reaching Dubnyk.  After the killed penalty, a long pass from Granlund reached Jason Zucker who turned on the jets to get a step on Trevor Daley for a backhand chance that was dismissed by Howard.  Later in the shift, Zucker would back check and knock David Booth off balance that drew the ire of Darren Helm who went after Zucker and the two speedy forwards would end up in the box for roughing and cross checking respectively.  After a little 4-on-4 play where it was spent chasing the faster Red Wings forwards around the Wild end, Minnesota was fortunate Detroit would get tagged with an elbowing call.  The Wild do little to nothing with the man advantage and Minnesota only managed a few shots in the perimeter and you could feel the anxiety of the home crowd as the period ended with their team trailing 1-0 to Detroit.  Not enough urgency as Minnesota was outshot 11-5 by the Red Wings.

2nd Period Thoughts:  Predictably the Wild seemed to have a bit more jump in their skates and the ice would tilt into the Detroit zone.  Minnesota was taking more chances to send shots on goal and Howard found himself a lot busier.  The game was still a bit flat and it would be a fight that would change the momentum of the game.  Luke Witkowski took a mild run at Parise.  Nick Seeler would skate over to Witkowski to let him know that wasn’t ok and the two would drop the gloves.  In most fights its part wrestling and dancing as fighters wait for the chance to toss a few punches; not this fracas as both pugilists were just leaning in and throwing punches with no regard to their own defense the way Bob Probert used to do so back in the 1980’s.  Both Seeler and Witkowski landed some nice haymakers but they were also taking their share of bombs in the process before the officials moved in to break it up.  The fight got the home crowd into the game and while the Detroit bench was infuriated by what they felt should’ve been an instigator on Seeler it was the Wild who went on the power play as Booth hooked Coyle before the fight broke out.  If you want to know what the fight really looked like, just fast forward to 3:22 of this clip of NHL 2001, it really didn’t look much different from this fight other than this one involves Dallas / Pittsburgh.

On the ensuing power play the Wild were all business and it was Jared Spurgeon sending a shot pass from the point that caromed off the skate of Staal and in.  1-1 game.  Minnesota would light the lamp a few minutes later as the Red Wings narrowly missed on a scoring chance and Minnesota would counter attack as Mikko Koivu pushed a puck up to Nino Niederreiter who found Parise with a pass and he’d sneak a shot just inside the right post and in.  2-1 Wild on what was a soft goal given up by Howard as he seemed to have the post covered when Parise took the shot.  The Wild started to skate with more purpose and they were able to generate better quality chances, but at times were still a bit loose in their own zone defensively and Detroit got dangerously close to tying the game.  Dubnyk had to make a bit save late in the period on Andreas Athanasiou to keep Minnesota’s 2-1 lead intact.  Overall, it was a better effort with the Wild outshooting Detroit 14-9.

3rd Period Thoughts:  The Wild spent most of the first half of the 3rd period sitting back in a very passive 1-2-2, not wanting to get caught defensively.  It was a prevent-type of strategy and the Red Wings couldn’t seem to get much of anything offensively going against Minnesota.  Nick Seeler and Nate Prosser had some great shifts, being physical at the right times and frustrating the Red Wings in their few jouneys into the Wild zone.  Minnesota would take a delay of game penalty as Luke Kunin batted a puck out of mid air and even though the puck struck the top of the glass the officials didn’t care and the Wild found themselves on the penalty kill.  On the penalty kill, the Wild would get their legs moving and the team seemed to realize it need to put Detroit on its heels.  Minnesota’s persistence would pay off as Mikael Granlund won a race for the puck into the corner and he’d send a low lying shot on goal that was just barely tipped by Zucker that ended up beating Howard 5-hole.  3-1 Wild.  The Red Wings felt like the game was slipping away so they’d pull Howard for an extra attacker a little inside 4-minutes left in the period but the bold move would backfire big time as the Wild intercept a pass in the neutral zone and Zucker would bury an empty netter and seal a 4-1 victory.

Devan Dubnyk was good, making 28 saves in the victory.  He got fortunate a few times as the Red Wings missed wide a few times down the stretch, but most importantly he kept it close early at a time when the Wild weren’t moving their feet and Detroit was dominating most of the play.  Defensively I was impressed by Seeler whose physical style really makes him standout and I’m not even talking about the fight.  He gives the blueline another dose of sandpaper to go along with Prosser who may not be a great possession player; keeps it simple in his own end and is miserable to play against.

Offensively the Wild still tried using the Parise, Koivu and Niederreiter on the power play, but the Staal, Zucker, Granlund line really carried the day with 3 goals this evening.  I realize the team wants to get another line going to take pressure off the Staal line, but points are too precious to put them at risk as they found out against the Coyotes.  Tonight they let the Staal line do its thing and they rewarded the club with a victory.

This was a big win to give the Wild a little breathing room in the playoff race after their recent 2-game stumble.  Playoff teams have to earn wins against clubs like Detroit and tonight the Wild took care of business and it probably didn’t hurt there wasn’t a divisional opponent in a back-to-back that may have drew their focus a bit.  Now the team needs to rest up for what will be another battle against a plucky Hurricanes team on Tuesday.

As the Minnesota Wild find themselves in the homestretch for the post-season, the Iowa Wild are in a nearly identical predicament.  After a solid January and February the team was in its best position to make the playoffs in franchise history but March has the club facing some of the AHL’s best teams so needless to say they will have to dig deep in order to survive the gauntlet.  On Saturday, Iowa traveled north to play one of the best clubs in the AHL in Manitoba and got off to a rough start as Michael Spacek and Brendan Lemieux found the back of the net behind Niklas Svedberg to give the Moose a 2-0 lead going into the 2nd period.  Tensions would rise in the 2nd period as both clubs ramped up their physical play, and Iowa would cut the Moose lead to one when Ryan White buried his 4th goal of the season.  Unfortunately, Manitoba would answer with another goal from Spacek and a shorthanded tally from Cam Maclise to give the Moose a 4-1 advantage going into the 3rd.  Iowa would make a game of it with 3 goals in the 3rd period from Zack Mitchell, Cal O’Reilly and Sam Anas to send the game to overtime.  The Wild couldn’t find a way to solve Steve Mason in overtime and it was Lemieux lighting the lamp with 9 seconds left in overtime on the power play to give the Moose a 5-4 victory.  Svedberg had 28 saves in the loss.

LW – Kirill Kaprizov (CSKA Moscow, KHL) ~ the playoffs have begun in the KHL, and the talented winger had two helpers in CSKA Moscow’s 6-0 rout of Spartak Moscow to give them a 1-0 series lead.

G – Dereck Baribeau (Quebec, QMJHL) ~ the big goaltender had 32 saves to earn a 5-0 shutout over Shawinigan on Sunday afternoon.  Baribeau has a 20-15 record, 2.92 goals against average and an .896% save percentage with 3 shutouts on the season.