10 MLB Players Primed for Regression in 2018 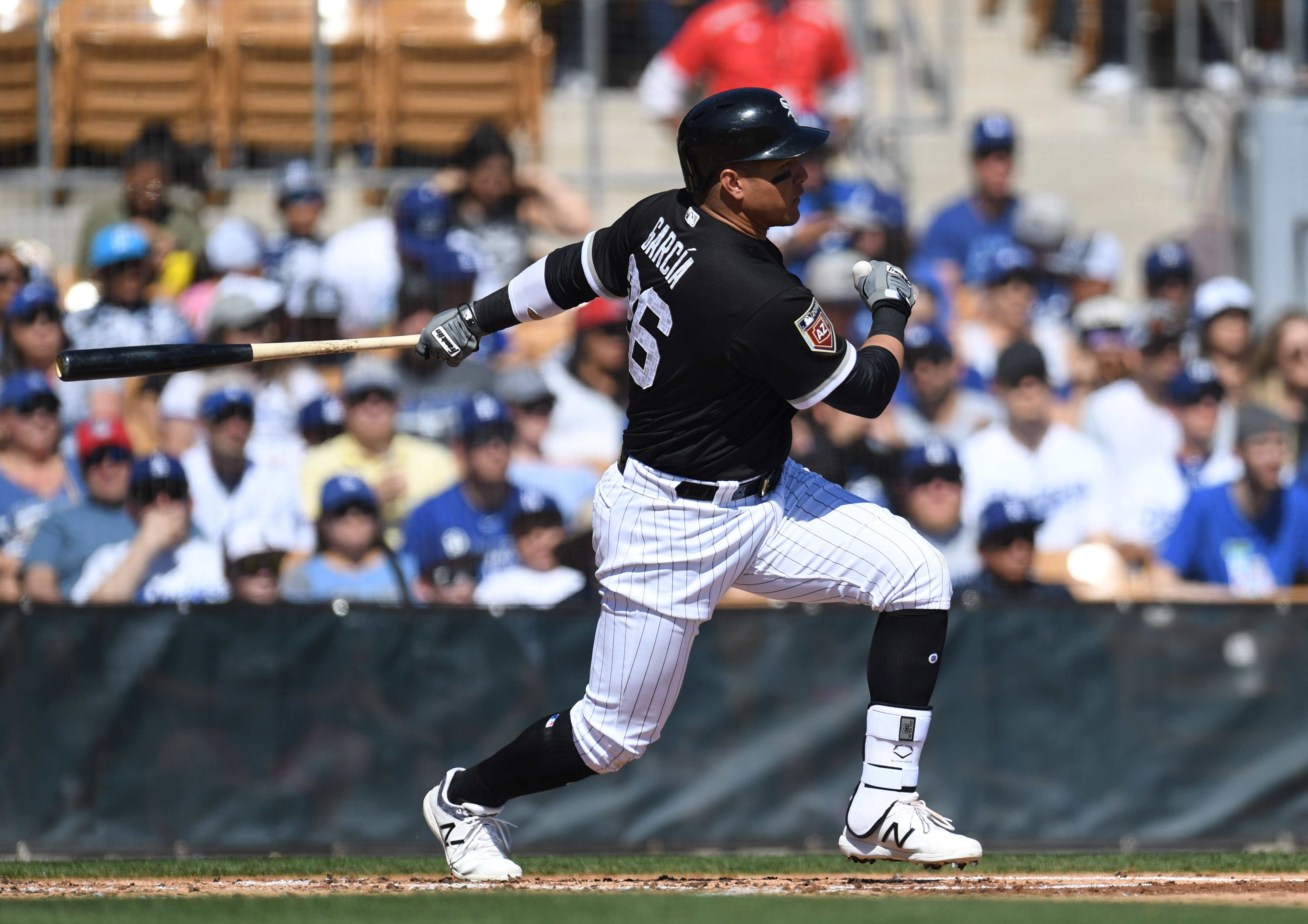 10 MLB Players Primed for Regression in 2018

Every ballplayer has their own set of personal goals for an upcoming season. While those may be very specific and unique to each person, it’s usually based off one thing — how they performed the year prior.

If a player had themselves a great year, they likely spent the entire winter trying to keep that momentum going so they could use it once Opening Day rolls around. For those how endured a tough campaign, they probably spent most of the winter trying to get that bad taste out of their mouth in order to start fresh the following spring.

The concept of regression is almost always viewed as a negative thing, but it’s also used in a positive sense. A player can regress back to the norm after a career-best year, as well as a career-worst year. The following 10 players fall into either of these two categories.

Entering 2017, Avisail Garcia was the not-so-proud owner of a 90 wRC+, .304 wOBA, and .695 OPS through 1,551 plate appearances. He only produced one season with a positive fWAR and compiled a cumulative -1.2 mark up until his breakout campaign happened, which included his first All-Star selection while seting new career-highs in just about everything.

Maybe, but it’s hard to feel confident when seeing he produced a league-high .392 BABIP despite a 52.2% ground-ball rate that didn’t look much different than the rest of his career (53.2% entering ’17). Garcia did post a career-high 35.2% hard-hit rate last year, but with a chase rate (39.8%) and swinging-strike rate (16.2%) also in line with the rest of his career, he’s got his work cut out for him to replicate that performance.

The Arizona Diamondbacks posted the third-best rotation ERA (3.61) and the second-highest fWAR (18.8) in baseball last season. They needed production from all areas of the starting staff, and Robbie Ray’s performance was a huge part of that.

The southpaw was worth a career-high 3.2 fWAR thanks to an eye-popping 32.8% strikeout rate and 2.89 ERA that was supported by a 3.53 SIERA. While some of his peripheral stats make this even more impressive, it should also help temper expectations for 2018.

Arizona installing a humidor to store baseballs could help Ray’s 1.28 homers allowed per nine innings from last year decrease, but that won’t help him walk fewer hitters — his walk rate was a career-worst 10.7%. And despite allowing hard contact a league-high 40.4% of the time, his .267 BABIP allowed was one of the 10 best marks among qualified pitchers, and only Clayton Kershaw posted a strand rate (87.4%) better than Ray’s 84.5% mark.

The problem is that his deal is with the San Diego Padres, where his new home stadium — Petco Park — is one of the few places in baseball that’s less hitter-friendly than Kauffman Stadium. Hosmer’s .351 BABIP is also worth noting because he accomplished it despite a 55.6% ground-ball rate and a 29.5% hard-hit rate that hadn’t been that low since his rookie season.

He has enjoyed consecutive years with 25 homers, but he’s the only player since 2002 to hit at least 25 taters with a ground-ball rate above 55% and a hard-hit rate south of 30%. Moving to a stadium that should be even worse for offense, expecting him hit those cumulative numbers again wouldn’t be realistic unless something changes in his approach.

The Washington Nationals also had one of baseball’s best starting rotations — their 3.63 ERA and 17.3 fWAR both finished among the league leaders. Having guys like Max Scherzer and Stephen Strasburg lead the way helps, but it was a bounce-back season from Gonzalez that contributed greatly to the cause.

With a fastball that’s continuing to decline in velocity, he’ll have to continue depending on his secondary pitches to keep this up.

One of Jose Urena’s best qualities is his ability to pump a fastball into the zone that registers in the mid- to upper-90s. So far, the bummer is that it hasn’t helped him rack up strikeouts at a high rate yet (14.5% strikeout rate, 8.3% swinging-strike rate for his career).

Unless he can use his pitch mix to keep hitters off balance more often, it’ll be tough to replicate these numbers with a much different kind of team behind him in the field.

Well, his plate discipline has remained consistent, and he hit the ball harder than ever in 2017. His line-drive rate has decreased each of the last three years, but it still settled in at 20.6%, while his ground-ball rate (32.9%) and fly-ball rate (46.5%) were both better than the league average. So you’d expect someone with batted-ball numbers like that and a career-high 37.0% hard-hit rate to produce a BABIP much higher than .244.

Although his 4.25 ERA was the highest of his three-year big league career, Lance McCullers’ 3.41 SIERA was the best it’s ever been in 2017. That can at least be partly attributed to a 7.8% walk rate that was also a personal best, but his 3.0-fWAR season that included just 118 innings was on track to be much more impactful based off the start he had.

Through McCullers’ first 91.1 innings, he owned a 3.05 ERA and .274 wOBA allowed to go along with a 28.0% strikeout rate, 7.1% walk rate, 63.0% ground-ball rate, and 24.2% hard-hit rate allowed. Back discomfort landed him on the disabled list multiple times, which not only robbed him from being on the mound, but it also skewed his overall numbers.

The biggest key for the young right-hander this year is to stay healthy. If he can do that, positive regression is bound to find him.

While Betts’ line-drive rate fell to a career-low 16.8%, his career-low .268 BABIP still doesn’t fit when considering the 42.8% fly-ball rate and 35.7% hard-hit rate he also produced. His 22.1% chase rate led to a walk rate (10.8%) that nearly outpaced his strikeout rate (11.1%), and his already-low swinging-strike rate decreased for the third consecutive season.

If the young outfielder can get more aggressive in the strike zone — his swing rate in this situation went down nearly five percentage points between 2016 and 2017 — then he should “bounce back” without a problem.

When looking at the difference between ERA and SIERA, Jeff Samardzija’s 0.79 discrepancy was the 10th-highest among qualified pitchers. Although he went 9-15 in 207.2 innings, his 3.8 fWAR was the second-highest mark of his career. He can thank his improved control for that — his 24.2% strikeout rate is above his career norm, but it was his 3.8% walk rate that really stuck out, especially since it was the best in baseball by nearly a full percentage point.

Two things that didn’t help him was his inability to strand runners (his 67.5% strand rate was a top-10 worst mark) and keep the ball in the park (his 1.30 homers per nine innings was one of the 20 worst marks in the league).

Both of those statistics were worse than his career norms, so we can hope he brings that improved control with him while rebounding in other areas. Pitching at AT&T Park can help, and hopefully the humidor in Arizona will help for his starts at Chase Field, too.

We’ve talked about Miggy’s 2017 on a couple different occasions, but this drum will keep beating until we see the decline continue.

Cabrera had the worst year of his career in just about every statistical category you can think of. However, it’s worth noting that his .292 BABIP is awfully low for someone that posted a 27.3% line-drive rate and 42.5% hard-hit rate. He actually generated hard contact more often than he did in 2015 or 2016, and it’s been above the 40% mark for seven of the past eight seasons, including the last six in a row.

While he certainly needs to stay healthy and probably get the ball up in the air a little more, Cabrera is due for some positive regression. We shouldn’t expect the elite production he’s provided throughout his career now as a 35-year-old, but it’s hard to believe he’s totally done with quality-of-contact numbers like that.

Hall of Very Good 11m ago