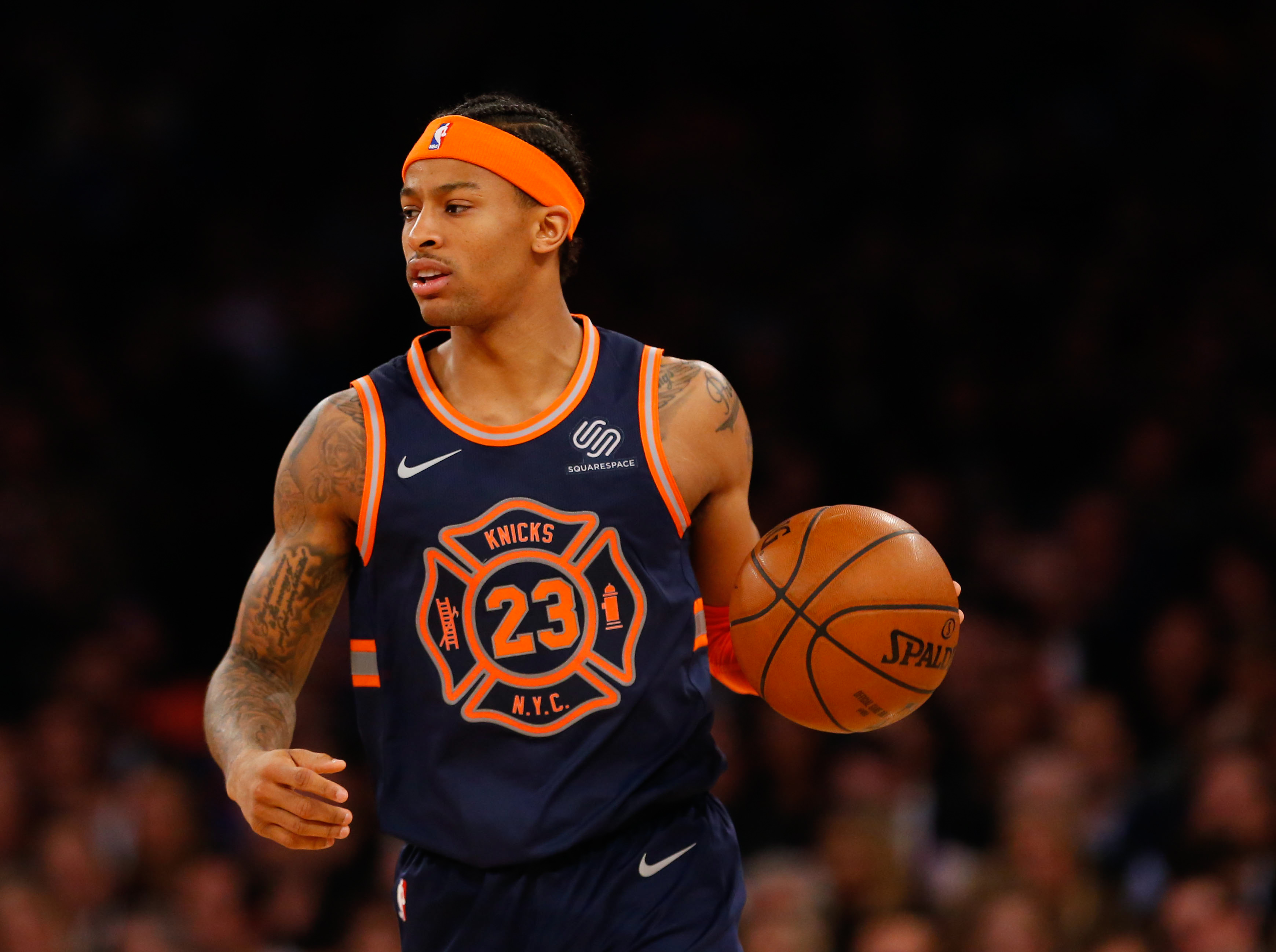 The Knicks are struggling right now, but given the promise of point guard trio Emmanuel Mudiay, Trey Burke, and Frank Ntilikina, there may very well be some light at the end of the tunnel when Kristaps Porzingis eventually returns. Until then, these floor general prospects are tasked with building chemistry as each one becomes more exposed to the professional game. With four seasons under his belt, Burke is the most tenured of the three, but given his career inconsistencies, it’s safe to say each one has much to learn.

How can they work together to continue bridging the gap so that New York can inch closer to a competitive future? Former Knicks floor general Charlie Ward, who spent nine and a half years in orange and blue, has some insight.

“[Chris Childs] and I played well together because we fed off one another. Neither one of us was a superstar, but we complemented each other. We were both tough guys who made things happen and played with energy,” Ward told KnicksJournal.com. “As a point guard, I needed to distribute the ball, play good team defense, and dive for loose balls. Whether we started or came off the bench, it didn’t matter. We wanted to win. When you’re winning championships or trying to compete for one, that’s what you need.”

For the record, Ward did start throughout his team’s run to the NBA Finals in 1999. Over the course of his tenure, the Knicks made the playoffs seven times and he was at the heart of spirited postseason rivalries with opponents like the Heat and Pacers. He knew how to win, compete, and perform on the grandest stage with something of meaning at stake.

Not discounting Jarrett Jack (and even the injured combo guard Ron Baker), the Knicks employ five players who can play the point guard position. Ward related to the current situation, recalling that he spent time on a roster that also included Doc Rivers, Derek Harper, and Greg Anthony, among others. As a rookie, Ward didn’t play much, but worked hard and soaked in all he could from the veterans so that when he received his chance, he was ready to go. At the same time, he credited those around him for all they had to give. That’s why it’s so crucial, he says, that the Knicks kept Jarrett Jack around past the trade and playoff eligibility deadlines.

“I think Jarrett Jack understands his role. He played a lot earlier in the season, so I believe he knows he’s expected to provide that veteran presence. The young guys need to learn how to be professional, take care of their bodies, and do little things that add to long term success,” Ward said, adding that such guidance was something that he received along the way.

Veterans like Harper and Herb Williams taught Ward “how to have a family and balance that with basketball by taking care of your body, eating right, and working hard. I was able to develop good habits. When I received an opportunity to play, we developed chemistry because everyone accepted their role.”

Speaking of good habits, the veteran of 11 NBA seasons and an array of locker room cultures added that developing a certain level of camaraderie and trust off the court will correlate to the success a team like the Knicks has when they hit the hardwood.

“We did bible studies and a few guys came. The presence we had in the locker room and the culture we developed meant a lot to players. It helps when you’re able to hold each other accountable on the road. It holds you accountable when you may be struggling, whether that’s on or off the court. You develop trust and people realize they can confide in you,” he shared. “We had a few families that hung out with one another off the court. What you do off the court can correlate to your progress on the court. You can do community events or team trips. The more you hang out, it can pay dividends.”

Ward also praised Coach Jeff Van Gundy and his staff for balancing the varied personalities. That’s something Jeff Hornacek can look to do with his respective squad. So what else do the Knicks need to be successful? While this team has been highly criticized for their defensive effort, Ward sees opportunities for improvement on the offensive end. He praised the recent emergence of Trey Burke, but says the team could still use another consistent scorer or two.

“The Knicks need more scorers. I like the new guy, Trey Burke. They need more guys that can consistently put the ball in the basket, especially now that Kristaps Porzingis is out. Tim Hardaway Jr. is a scorer, but I think he needs more time since he missed games this season. The Knicks need one more guy in order to compete with the top teams in the East,” he added.

Currently coaching high school football, perhaps Ward could impart the current Knicks squad with some wisdom if asked. He says he’d be interested in getting back in basketball. The veteran’s new biography features perspective from Jeff Van Gundy, who added that the former point guard was on his way to becoming an NBA head coach after spending two seasons on his Rockets staff as an assistant. Ward took a different path, but such potential likely remains given his storied career and demonstrated leadership.