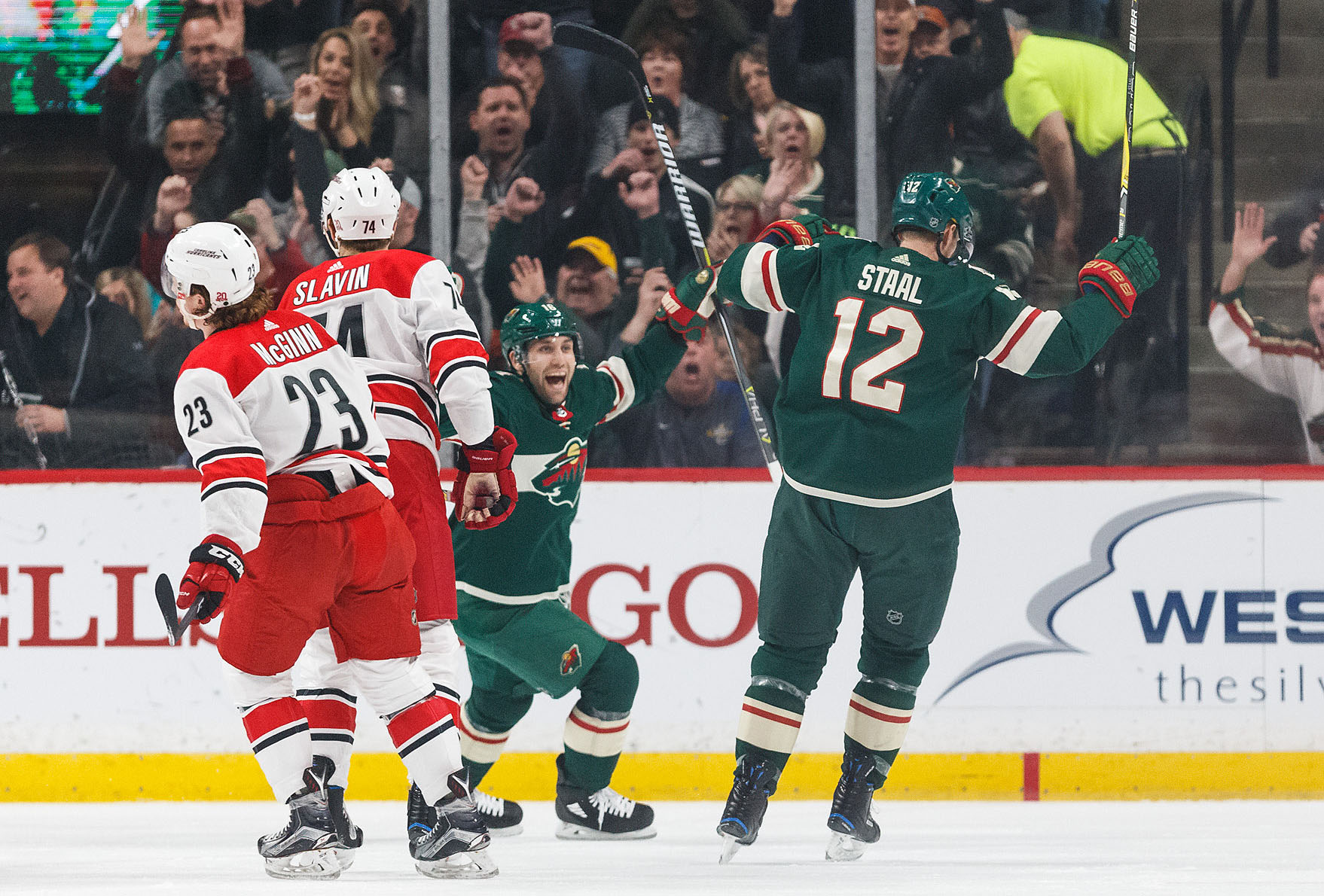 The Oscar Awards for the year of movies in 2017 have been handed out.  Performances were honored, words of inspiration and an absolute ton of thank you’s dealt out despite the offer of a brand new Kawasaki Jet Ski for the shortest acceptance speech.  It was a noble attempt to speed along an awards show that is notorious for going late.

Minnesota might wish they could offer a Jet Ski to teams to fast-forward to the end of the season with a fairly healthy (knock on wood) team that is currently sitting in the ever-tight Western Conference playoff picture.  The Carolina Hurricanes beat Minnesota in a shootout (5-4) in the 2nd game of the season but currently are sitting well out of the playoff race.  Can the Wild earn another important 2 points at home against a non-playoff team?

1st Period Thoughts:  With a quiet crowd in attendance tonight, perhaps from shoveling and snowblowing the last two days the Wild would try to play an up-tempo game against Carolina.  Minnesota was leaning on its top line of Eric Staal, Jason Zucker and Mikael Granlund right away and they were causing havoc in the Hurricanes’ zone and Cam Ward appeared to have trouble seeing the puck.  Minnesota would draw a tripping call on Viktor Rask giving the Wild an early power play.  Minnesota again kept its top line on the ice and with good crisp, quick passes they were able to open up a shooting opportunity for Eric Staal who took advantage of the traffic near the crease and he’d snipe a wrist shot by Ward.  1-0 Wild.  Minnesota had a few opportunities to add to their lead as the top line again was causing Carolina fits down low with the puck as Granlund set up Zucker from close range who chipped a shot that Ward got just enough of to keep it out.  Moments later the Wild had another great opportunity as Daniel Winnik had a tap in goal all wrapped up but he’d shovel the shot into the leg pad of Cam Ward instead.  After that it was mostly Carolina due to some careless turnovers in the offensive zone.  Matt Dumba had a horrific turnover in his own zone as he had plenty of time and space to make a good play instead fanned on the pass which set up a breakaway chance for Sebastien Aho and luckily for him he was denied by a sensational save by Devan Dubnyk.  Dubnyk was the story of the period as he made a number of great saves on chances from in close as he denied Justin Williams and Haydn Fleury.  Minnesota’s defensive coverage would best be described as static as the Wild stopped moving its feet and penalties also gave Carolina additional changes and Justin Faulk seemed to be on a mission to score as the South St. Paul-native was pinching with regularity and Minnesota seemed to have difficulty in accounting for him.  The Wild had to feel as though it escaped being ahead 1-0 as Carolina had enough quality chances to be up by two or three if not for Dubnyk’s strong play.

2nd Period Thoughts:  The Wild would strike with four quick goals to start the 2nd period.  The first came just 23 seconds in as Jared Spurgeon flung a wrist shot that deflected off the stick of Nino Niederreiter and fluttered over the shoulder of Ward and into the back of the net.  2-0 Wild.  The pain continued for Carolina as Brett Pesce hooked Granlund for a penalty.  Minnesota wasted little time on the power play as Mikko Koivu sent a pass into the slot for an easy redirection goal by Zach Parise who was parked about 7 feet in front of the Carolina crease.  3-0 Wild.  Ward and the Hurricanes were clearly demoralized as Minnesota would add another goal just a minute later as Winnik skated in off the rush and he’d wire a wrist shot top cheese by Ward.  4-0 Wild, and Ward’s night would come to a conclusion as Bill Peters had seen enough and he sent out Scott Darling in relief.  If it was only for relief as Minnesota would strike a little over 20 seconds later as Eric Staal took a long pass for a breakaway and he’d get Darling to commit before lifting a forehand shot over the sprawling goalie.  5-0 Wild.  Minnesota would ease up its offensive pressure a bit, but they continued to create the majority of quality scoring chances for the rest of the period and if not for a few clutch stops by Darling the game could’ve easily been 8-0 or 9-0.  Defensively the Wild had also tightened up its game, giving Carolina little in the way of time and space and Minnesota was forcing turnovers and quickly transitioning back into offense.  Dubnyk didn’t have to make nearly as many save as he did in the 1st period, but he made a few more nice stops with the Hurricanes crashing and looking for a rebound and Minnesota had to be feeling pretty good carrying its 5-0 lead into the 3rd period.

3rd Period Thoughts:  With the pressure off it is predictable the Wild would ease up its offensive pressure and simply try to play responsible hockey with its 5-goal lead.  The goal was to try to preserve a shutout for Dubnyk who had played so well earlier in the game.  Minnesota was also looking for a few opportunities to give Staal a chance at a hat trick early on in the 3rd but thought better of it and gave more shifts to its 3rd and 4th lines instead.  The Wild was more concerned with working pucks deep than it was scoring so it was inevitable they’d find the back of the net and break the shutout bid.  It came on a floating shot from the point by Trevor van Riemsdyk that was redirected by Phil DiGiuseppe and by Dubnyk who agonized at the loss of the shutout, 5-1 Wild.  Minnesota would answer back with some good puck pressure in the offensive zone as Matt Cullen seemed to be a bit snarly as he swept up a puck and rifled it by Darling to give Minnesota at 6-1 lead.  Carolina would score one more time as Rask netted a power play goal but that was as close as it got with the Wild skating away with a 6-2 victory.

Manitoba would get out to a fast start when Pete Stoykewych blasted a shot from the point that beat Steve Michalek.  1-0 Moose.  Iowa would answer back a few minutes later on the power play as Zach Palmquist let go a bomb from the point tying it up at 1-1.  The Moose would answer back with a blast of their own as Sami Niku blistered a shot though traffic that Michalek never saw.  2-1 Moose going into the 2nd period.  In the 2nd period Iowa would respond with two goals as team captain Pat Cannone scored from in close and then a few minutes later it was Ryan White sweeping up a rebound and shoveling it home to give the Wild a 3-2 lead.  Iowa would add another goal early in the 3rd as Viktor Loov sent a pass up to Zack Mitchell for a breakaway and he’d wrap a shot around a sprawling Eric Comrie to give the Wild a 4-2 lead.  That goal would be important as a ‘too many men’ penalty led to a power play goal for Buddy Robinson but that was as close as the Moose would get as Michalek was able to make some huge stops in the closing minutes of the game.  Michalek would have 28 saves in the victory.