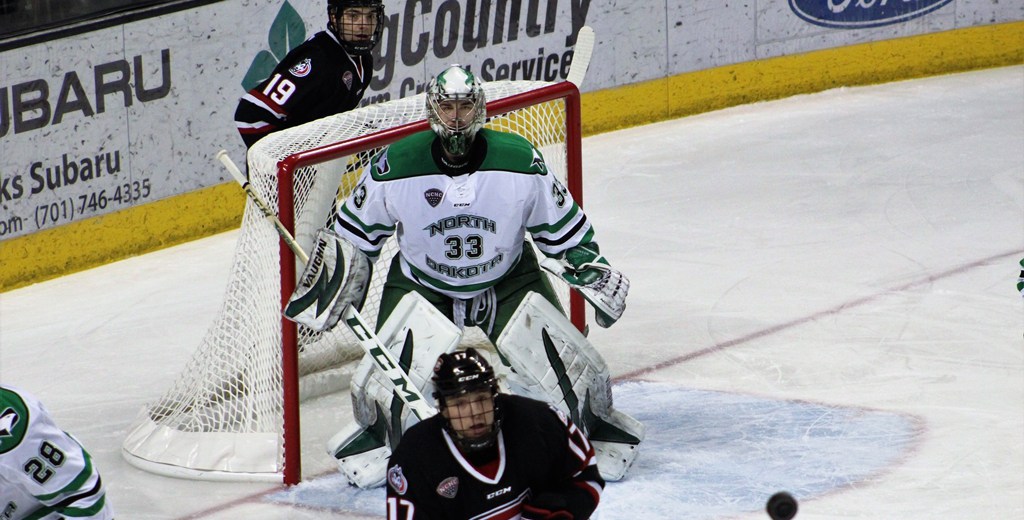 The playoffs are finally here for the University of North Dakota hockey team. Last week, during the Wednesday hockey press conference, head coach Brad Berry was in playoff mode. I can imagine the intensity will be upped another notch this week. UND is fighting for its life and could have its season ended this weekend if they don’t advance to the Frozen Faceoff. Brad Schlossman thinks UND has to sweep next weekend to make the NCAA tourney.  With the Pairwise Rankings, who knows?

During his three seasons here, junior defenseman Christian Wolanin has been great for quotes. After Saturday’s game, Wolanin said something that caught my ear.

“Everything about North Dakota is that you do it for the guys that were here before you,” Wolanin said. “You do it for the guys that have been through it all. Those four seniors have won a Penrose, have won a national championship and all of them have letters besides Cammer (Cam Johnson). They deserve all of the credit they’re getting and they’re deserve a win and home ice. They’re a great group of guys.”

After Friday’s game, I asked junior forward Nick Jones about the current mood in the UND locker room. Here’s what he said.

“We’re up right now,” Jones said “We’re obviously disappointed, but we’re up for tomorrow. We got four seniors in that locker room that have been here for four years and we want to send their last… their senior weekend on a good note. These guys won a national championship and we got a team in here that wants to play for those guys and everybody else in the locker room. We’re going to be completely invested in tomorrow night. It’s disappointing tonight, but we’ll come back tomorrow and give everything we got tomorrow.”

Jones continued. “It’s been an emotional roller coaster this season. We’re pretty used to highs and lows right now. We have a pretty good leadership core in here and I think we’re excited about the opportunity.”

UND fans may take for granted top-half finishes, but consider that UND's 16-year run is at least 10 years longer than everyone in the country outside of Boston College (9 years). And still seven years longer than BC.

Brad Schlossman from the Grand Forks Herald tweeted out an interesting tweet after Friday’s game. It’s something to think about. Seriously, UND hockey fans are lucky. During the last 16 years, UND has had home ice for the conference playoffs. During the last 15 years, UND has advanced to the conference championship. Each time qualifying for the NCAA playoffs. That’s a remarkable feat. One day that feat is going to come to an end.

Moreover, since UND has been a member of the National Collegiate hockey conference, they’ve finished in the top four every season. There are teams that have never made the Frozen Faceoff. Not once. Colorado College and Nebraska-Omaha come to mind. Think about this, UNO hasn’t made a conference championship since they were a member of the CCHA (2004-05 season). The players think about these things. It’s on their minds.

“We don’t want to be the ones to ruin that,” Wolanin said. “Obviously, it’s got to end at some point, but we don’t plan on being that group.”

I don’t think any team will be overlooking their opponent this weekend. Any team in the NCHC can beat anyone on any given day.

Who’s Goes on the Milk Carton?

Scotty Wasilewski and I joke on twitter about who we’re going to put on the milk carton. Checking the numbers, sophomore forward Cole Smith has played in 33 games scoring (5g-4a–9pts). Since January 1, 2018, Smith has tallied a single goal, he had four during the first 20 games of the season. Smith last goal came on January 26, 2018, against the Denver Pioneers. Smith was suspended the next night.

Smith started the season with some momentum, during the first half of the season, Smith and his linemates Johnny Simonson and Trevor Olson had chemistry. Olson was injured and missed a significant number of games. Olson wasn’t alone, only five players (not counting goalies) played in all 36 games this season.

Injuries or not, Smith’s low goal total during the second half is puzzling. He’s a big rugged forward that gets to the dirty areas. Smith is an honest forward that play a 200-foot game. Here’s hoping Smith finds the twine again soon.

The Brackets are Set

The playoffs officially start this weekend, here are the matchups.