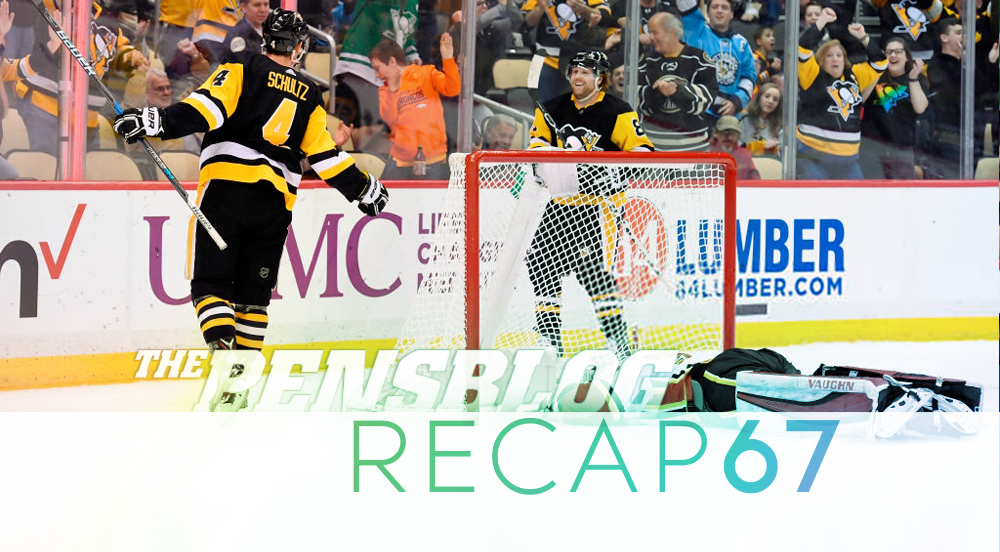 Same lineup as Saturday’s win against the Islanders.

Josh Yohe of The Athletic had a good report about Kris Letang’s early struggles.

For those of you just learning hockey, no worries, Bob Errey was here for from the hop.

“Get to the blue paint, that’s the top of the crease!” Dynamite drop in, Bob.

Peep, give us a breakdown of how the first three or so minutes would go:

Pens are going to scorch the Flames.

On a delayed penalty, The Best God Damn Sixth Defenseman in the National Hockey League, Chad Ruhwedel would send an innocent shot on net that would prove to be the back breaker for rookie goalie Jon Gillies.

Less than a minute later, to show solidarity to his fellow rookie goaltender Tristan Jarry, Gillies would forget how to play the puck behind the net and Geno picked his pocket quicker than a GOP Tax Bill. 2-0 Guins.

Much to the chagrin of the Penguins, Calgary didn’t go away. An extended shift by the Flames and a broken stick for Kris Letang led to a Mark Giordano goal. Jarry with several good saves in the lead up to the goal, but you can only do so much.

As former tPB contributor turned Capital J Journalist, Jesse Marshall pointed out pregame, the Flames play a similar style to the Penguins, fast. They generate scoring chances and shot opportunities well above the league average. This was evident early as their defense activated frequently and threw a lot of pucks at the cage.

Backlund would tie the game on a beautiful individual effort, walking Kris Letang in the process. Your jock can be picked up in Section 214, Tanger.

What we need to talk about is the sequence before the goal. The Flames sealed the walls and had a neutral zone forecheck that put the Penguins at a disadvantage. Credit to Backlund, but the overwhelming pressure in the neutral zone is what led to this game being tied.

Second half of the period would be all Jarry. Completely opposite from the first five minutes, the Pens got significantly out-shot and out-chanced up and down the ice. Jarry made some key saves and we headed to intermission tied at two.

0 Shot Attempts For
13 Against

That line alone accounts for the majority of the shot share discrepancy in this hockey game.

It’s time for Sheary to sit.

The first period was two heavyweight fighters looking to set a tone early. The second period was when they both realized their primes were ages ago.

An early power play for the Pengs came up empty and…well there wasn’t much else going on.

Highlight of the period was this save by Jarry:

With just about three minutes to go….

Geno with the assist, four points back of Kucherov.

Get out of the period, have a lead, sounds simple enough? Wrong. Troy Brouwer (still in the NHL, who knew?) would have a yawning cage with 2.4 seconds to go.

Ruhwedel can’t let that pass get through. To the third we went.

Third period was a microcosm of this game. The goaltenders were good, both teams had some good chances and the Penguins struggled to exit their own end.

I almost feel bad constantly bringing it up (second time this recap) but Sheary’s inability to handle passes as of late is a detriment to the team’s ability to breakout of the zone or cleanly enter the offensive zone. Not sure if a benching would do the trick, but it’s becoming very much a problem.

That said – the Penguins were very much relying on flipping the puck (a la Larry Murphy) high and hoping for someone to win the race. Calgary isn’t Anaheim, they’re fast and that’s not going to work. Luckily, last matchup with them this season.

The PK would come up huge with under 10 minutes to go, and brought us what was arguably the strangest moment of the season:

Imagine if that counts…

Penguins would come on strong late, but nothing doing. Three-on-three city.

-Ruhwedel, the Brouwer goal aside, with another very strong outing. Lead the team in shots after two periods, was mostly positionally sound and obviously had a goal.

-Despite all the contact, very solid night for Tristan Jarry. Kept the Penguins afloat at the end of the first period when Calgary had extended zone time.

-Oddly quiet night for Johnny Gadreau. Not that I’m complaining.

-Geno three points back of Kucherov.

-Flyers on Wednesday for a chance to take the top spot in the Metro.