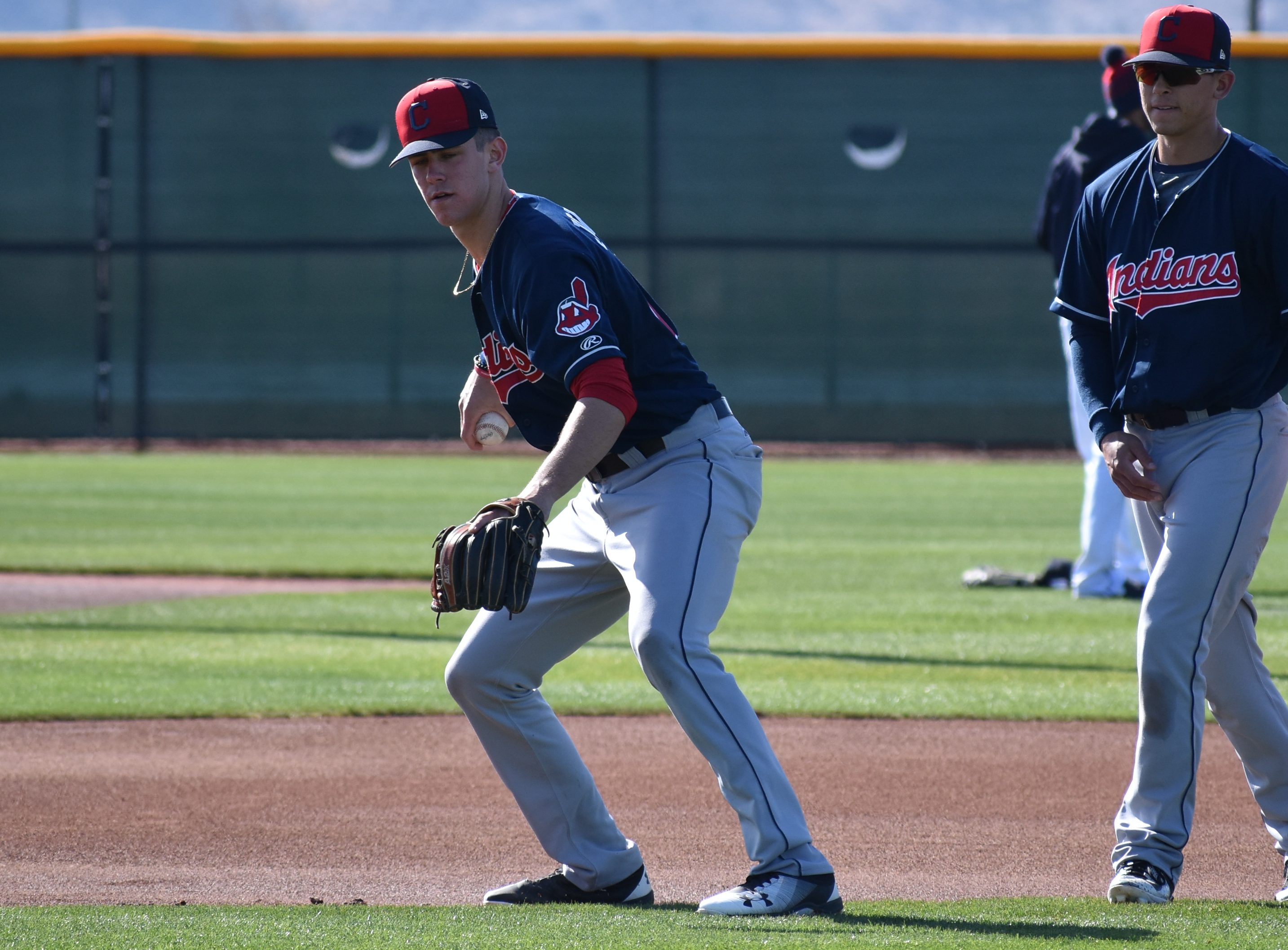 It’s getting very difficult to categorize Indians minor leaguers by position. Just a few years ago, we all knew Francisco Lindor was a short stop, Bradley Zimmer was a center fielder and Jose Ramirez was a second baseman, but now even the Indians top prospects are being moved around the diamond for what could be a multitude of reasons.

Beginning in the current MLB spring training camp, Francisco Mejia has been a catcher since he was signed in 2013, but last year he began an excursion to third base that has yet to be concluded. While it was only a few games in the Arizona Fall League, there was a concerted effort in this case to give him a clearer path to the Major Leagues. It is not that Mejia is a poor defensive catcher (he has a tremendous arm although some questions considering calling a game at the MLB level), but with Roberto Perez and Yan Gomes already in Cleveland, there is little room for another back-stop. In this case, the conversion may have come to late in his career to do him any good, but further down the farm the Indians are trying out all sorts of experiments this spring.

When moving a high end prospect, a quicker path to the Majors is likely the goal, but there are other reasons as well. One in particular that I’ve seen this spring is Joe Sever transitioning to catcher. You may not have heard of the 27 year old 21st round draft pick (2012) and he will likely never play in Cleveland, but his career has taken an interesting path. Originally drafted as a second baseman, he spent his first season largely at third, then played almost exclusively at first for the next three years. Playing alongside Nellie Rodriguez in 2016 and Bobby Bradley in 2017, Sever moved back to third, but also spent time in the outfield and at second base. Now, he has donned the tools of ignorance in an effort to keep playing baseball as the Indians upper levels become more and more dense.

Sever never hit well enough to be really considered as a first baseman, but he improved his OBP and his BB/K rate last year and, at a minimum, could now be a very useful utility man for Akron if not Columbus. With a constant train of players heading from Columbus to Cleveland and back again in most seasons as injuries wrack not only the Major League team, but the minors as well, having someone who can play five or more positions could be incredibly valuable. In addition, there should always be an emphasis on youth in minor league organizations as players like Sever still have a chance to break out while other options for a similar role, like Michael Martinez, have proven time and time again that they never will.

Sometimes these moves are made out of necessity. After three seasons in Lake County, Dorssys Paulino was at risk of becoming team mascot before a 2015 promotion to Lynchburg and transition to full time left fielder resurrected a bit of his potential. This is not to say that Paulino is now going to live up to his past billing as Indians top prospect, but it certainly extended his playing career and he could potentially be added to the Indians 40 man roster next November.

In similar fashion, the Indians appear to be trying out current top 10 prospect, Nolan Jones, out at first base. As a third baseman in the AZL in 2016 Jones had a very odd season as he came out of the gate looking like a gold glover, but that gold quickly turned to iron. His defensive faults followed him to Mahoning Valley last year where 22 errors drastically marred a .317/.430/.482 line. Jones still has tremendous potential as a left side of the infield player, but maybe a move to first will help him get his mind in a better place. Based on personal observation, I still see Jones as a third baseman for the long haul, but being able to play a less difficult defensive position could open up more options for him over the next few years. In fact, it wouldn’t be surprising to see him play in the outfield at some point as he has good speed and a very strong arm.

Of course, at some point the versatility doesn’t make much sense, such as moving Simeon Lucas to from catcher to first base. His bat has improved over the last two seasons, but no where near the point of what would be considered at first base (Bobby Bradley, Jesus Aguilar and Nellie Rodriguez created a pretty high standard for the low minors in recent years). Already 22 and never having played as high as Lake County, there seems little reason for the move, a feeling made more extreme after watching him take ground balls at first.

Looking towards the upcoming season, the Indians should be able to solve any injury related problem for the short term thanks to the increased versatility in seasons past. Last year in Columbus, Richie Shaffer played 3B and outfield, while Giovanny Urshela, Eric Stamets and Erik Gonzalez can play all three skill infield positions with Gonzalez playing some outfield as well. All four of these players should be considered at least MLB replacement level and Todd Hankins remains (likely well below MLB replacement level) with the team as well with more than 15 games played at all three outfield positions and every infield position except first base.

In Akron, Yu-Cheng Chang only played short stop last year, but has played plenty of 3B in the past while Tyler Krieger and Mark Mathias are both second basemen who could play short in a pinch (Mathias has also played a bit at 3B). Nearly all the Indians outfielders up and down the system have been moved around enough that they should be comfortable wherever they are most needed on a given day. In fact, it would appear that the Indians only real position player prospect who doesn’t have at least two fielding options is Bobby Bradley, who has cemented himself as the Indians first baseman of the future. This, however, is a case like Lindor and Zimmer before him where he is so effective both offensively and defensively at the position that there is no reason to move him.

All this movement should make for an interesting minor league season up and down the farm. It also could provide some feedback to the old debate over consistency in baseball. Will it hurt players to constantly switch positions or will it make them better overall athletes? In particular, can it be the spark for change that could revitalize a career for a player as it did with Dorssys Paulino? As the season plays out, keep an eye on Joe Sever, Nolan Jones, Mark Mathias and Simeon Lucas as well as those I didn’t mention like Gavin Collins, who isn’t quite ready to give up catching for good.