Your Morning Dump... Where the C's got some payback from the Bulls 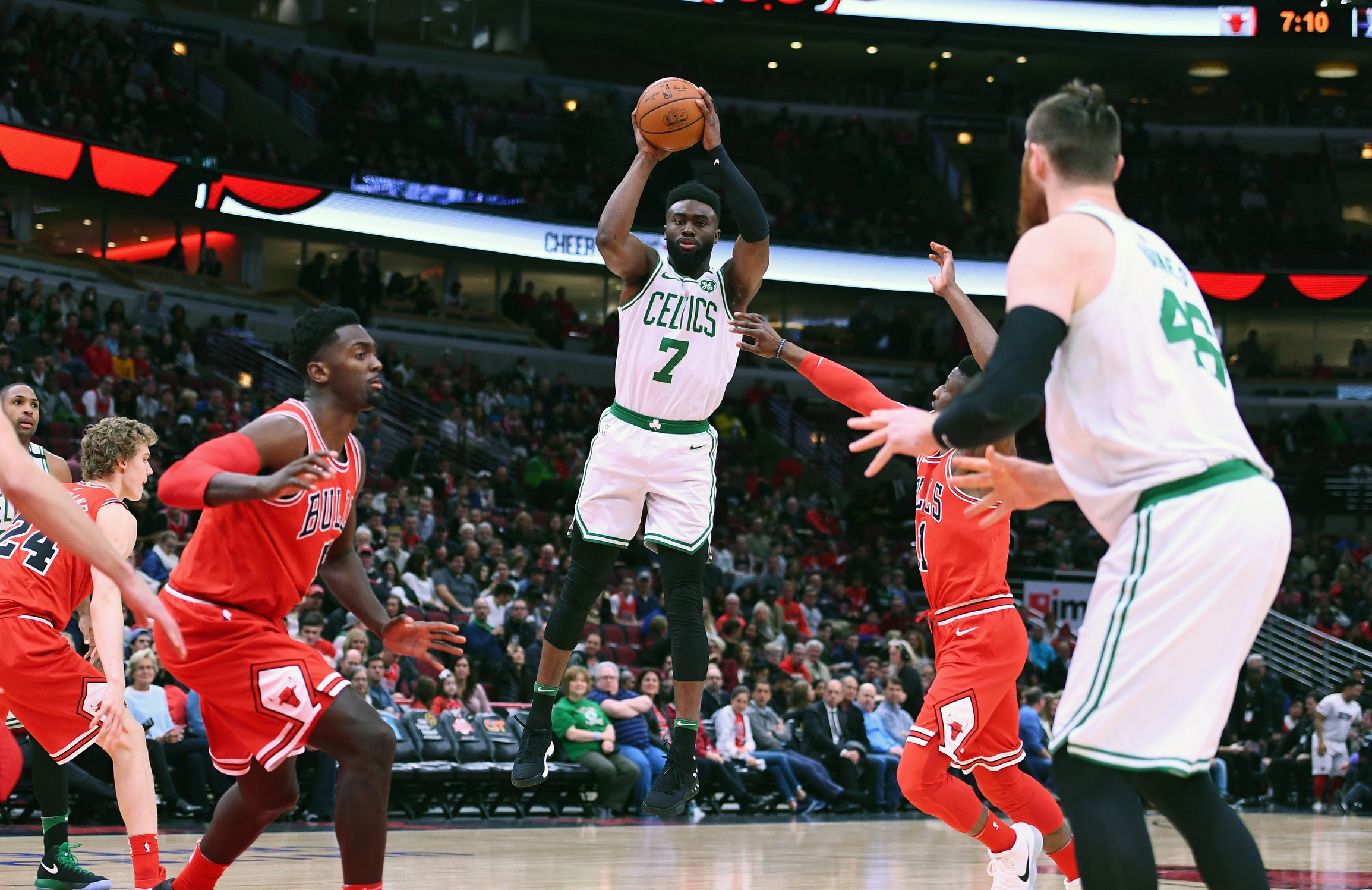 Your Morning Dump... Where the C's got some payback from the Bulls

By midway through the first quarter, Boston had already racked up runs of 7-0 and 17-0. Eleven of their first 12 shots were at the rim and the other was a 3-point swish from Jayson Tatum. Al Horford clearly focused on overpowering Bulls rookie Lauri Markkanen in the post, while the rest of the Celtics set their sights on the rim.

The Celtics went four minutes without scoring during one second-quarter stretch, but still entered halftime with a 55-29 lead. Yes, the Bulls, an NBA team, failed to crack the 30-point barrier during the first half. Boston held Chicago to 28.2-percent shooting over the first two quarters, including a 3-for-13 mark (23.1 percent) from behind the arc. Jaylen Brown, Jayson Tatum and Horford combined for 36 first-half points — or, in other words, seven more than the entire Bulls roster.

Larkin finished with nine points and four assists over 16 minutes. The rest of the Celtics starters sat for the entire fourth quarter because the lead, which grew to as many as 37 points, was never in jeopardy.

The Celtics should’ve won Saturday night. They blew a six point lead and looked decidedly discomposed while playing against a team that generally does the falling apart when things get tight.

That might have given them a bit of extra motivation when they came into the United Center last night. With Shane Larken taking the Gerald Green role as surprise spot starter, in order to keep the Celtics’ bench unit more or less intact, Boston came out and pretty much ended the game sometime during the first quarter.

This is probably what the Bulls wanted too, as they’ve apparently decided to spend the rest of the season trying to get as many lottery balls as possible.

The addition of Irving, while initially polarizing, has been a boon for Celtics fans. On the court, Irving has been fantastic, stepping out of LeBron’s shadow and delivering a series of incredible crunch-time performances. Off the court, the self-proclaimed flat-earth truther has been everything Celtics Twitter could ever want from a franchise player. You couldn’t dream up a better match for this fanbase’s newfound embrace of the absurd than a superstar point guard who’s currently going through every eighth-grader’s Jim Morrison phase.

The Riffs Man, in particular, has found Irving a fruitful new muse.

Sean Highkin with a deep dive into the world of weird Celtics twitter. It’s a fun read, plenty of quotes from Weird Celtics Twitter legend @hebertofriffs.

However, I think Sean has overlooked one of the fathers of Weird Celtics Twitter, this guy:

If anyone introduced Celtics fandom to whimsical commentary just this side of nonsense, it was Evan Turner.

Consider some of these gems:

I don’t want to sound super weird, but Jesus was hated, too

“When I was dribbling, I was like, ‘Oh, snap, I’m at 15 feet, I’m about to end this.’ And then I thought about [Michael Jordan] passing to Steve Kerr. And I thought, ‘Well, let me add that to my legacy. I’ll pass one time.’ And that was it. It was unbelievable, actually. Ingenious by me.”

People will say it’s for Kobe, but deep down it’s probably for me.

“I been on the toilet all night, my butt crack feels like it has sun burn #pause. I’m so annoyed”

I’m happy that Evan cashed in big time over in Portland, but can you imagine what a team with Kyrie and Evan Turner would be like?

Finally: Can your team do this?

The younger Celtics are apparently made of rubber.

The flagship universities of the state – South Dakota and South Dakota State – squaring off in Division I conference tournament championship games for men’s and women’s basketball. The men’s game will play to a national television audience on ESPN2 at 8 p.m. The women on ESPNU at 1 p.m.

Among them, the four South Dakota college basketball teams have won 104 games. It’s gonna be quite a pair of games for the oldest State/U rivalry in the country. I have a slight bias toward the team in blue and yellow.

NBC Sports: Decision to start Larkin pays off | A total team effort | No Kyrie, no problem for C’s

Boston Globe: Kyrie Irving: ‘I just want to make sure I’m as healthy as possible.’