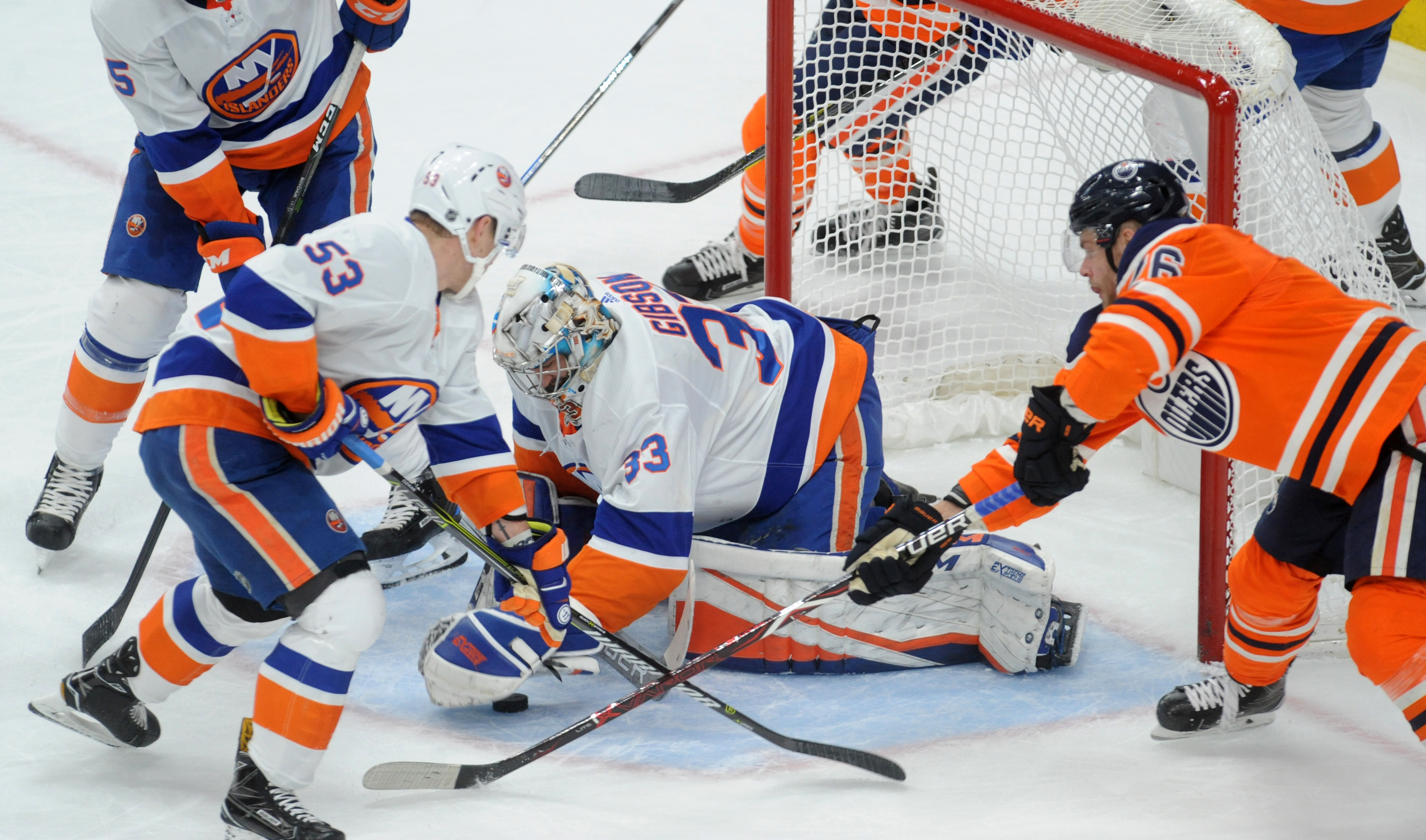 Make it eight in a row for the Islanders… Eight losses that is.

The Islanders let victory once again slip away on Thursday night in the form of 2-1 shootout loss to the Edmonton Oilers. New York did pick up a point in its third consecutive game, but it was essentially meaningless with the Carolina Hurricanes, Florida Panthers and Columbus Blue Jackets all winning.

The Islanders held a 1-0 lead heading into the final two minutes of the game, but watched as Connor McDavid scored a fluky goal with 1:50 remaining in the game to tie things up. It was McDavid again who scored the game-winning goal in the shootout for Edmonton.

Thomas Hickey scored the Islanders only goal in regulation 1:54 into the third period and Jordan Eberle score their only goal in the shootout.

1. The Islanders are now seven points out of the final wild card spot in the Eastern Conference. Considering the eight game skid that this team has been on, it’s miraculous that they’re still that close to a potential playoff spot. That being said, if anyone was still holding out hope that the Islanders might go on any sort of run, this game may have finally broken their spirits. Despite looking like the better team for a majority of the game and holding the lead against a team that has been out of the Western Conference playoff picture for some time, the Islanders still couldn’t pull out a much needed win. The Islanders had an uphill battle at the beginning of Thursday’s game, as noted by new beat writer Andrew Gross, and the hill is only getting steeper after the loss.

Playoff cutoff in Eastern Conference may again wind up at 95 points, which left #Isles one point shy last season. Say it dips to 93. Or even 92. In that case, #Isles would still need 25 or 26 of a possible 30 points left on board for them. https://t.co/ymZKOeQeoi

2. It was the typical minor mistake that cost the Islanders two points, with Connor McDavid able to get a step in front of forward Branden Davidson as he rushed towards the back of the net.  McDavid’s attempted pass to Zack Kassian in front of the net was deflected off the stick of Davidson, hit off of Christopher Gibson and went in. If that isn’t a summation of the Islanders fortunes lately than I don’t know what is.

3. It’s unfortunate for Gibson who was robbed of his first win of the season for the second start in a row. McDavid’s goal was the only one that got by the Islanders starter despite his best efforts. Gibson made 35 saves on 36 shots which included a number of tough saves on McDavid throughout the 60-plus minute affair. His strong performance also included several timely saves in the overtime period.

Gibson was 1:50 away from his first career shutout in the NHL.

4. Doug Weight was clearly not happy with the Islanders latest loss. He looked visibly agitated as MSG Plus’ Shannon Hogan tried to extract whatever she could from the Islanders bench boss. It wasn’t until her final question about Thomas Hickey that Weight finally gave an answer of substance. Weight has become increasingly curt with the media in recent months as the Islanders season has taken a turn for the worse, a sign of what is likely frustration over the current set of circumstances.

An actual face made by Doug Weight during a postgame interview, following an Islanders' shootout loss. pic.twitter.com/qi3A6lEgq6

5.  Cal Clutterbuck and Jujhar Khaira dropped the gloves in the first period. The fight was the first one for Clutterbuck in an Islanders uniform and his first since March 14, 2013. The fight stemmed from an earlier crosscheck by Clutterbuck on Iiro Pakarinen as he was going off the ice for a change. Clutterbuck was called for a penalty — a rather dumb one to take — and then had to answer the bell whe Khaira wanted some retribution for his teammate. Judging by the reaction from the Oilers broadcast team and coach, they were pleased to see khaira put down the Islanders forward.